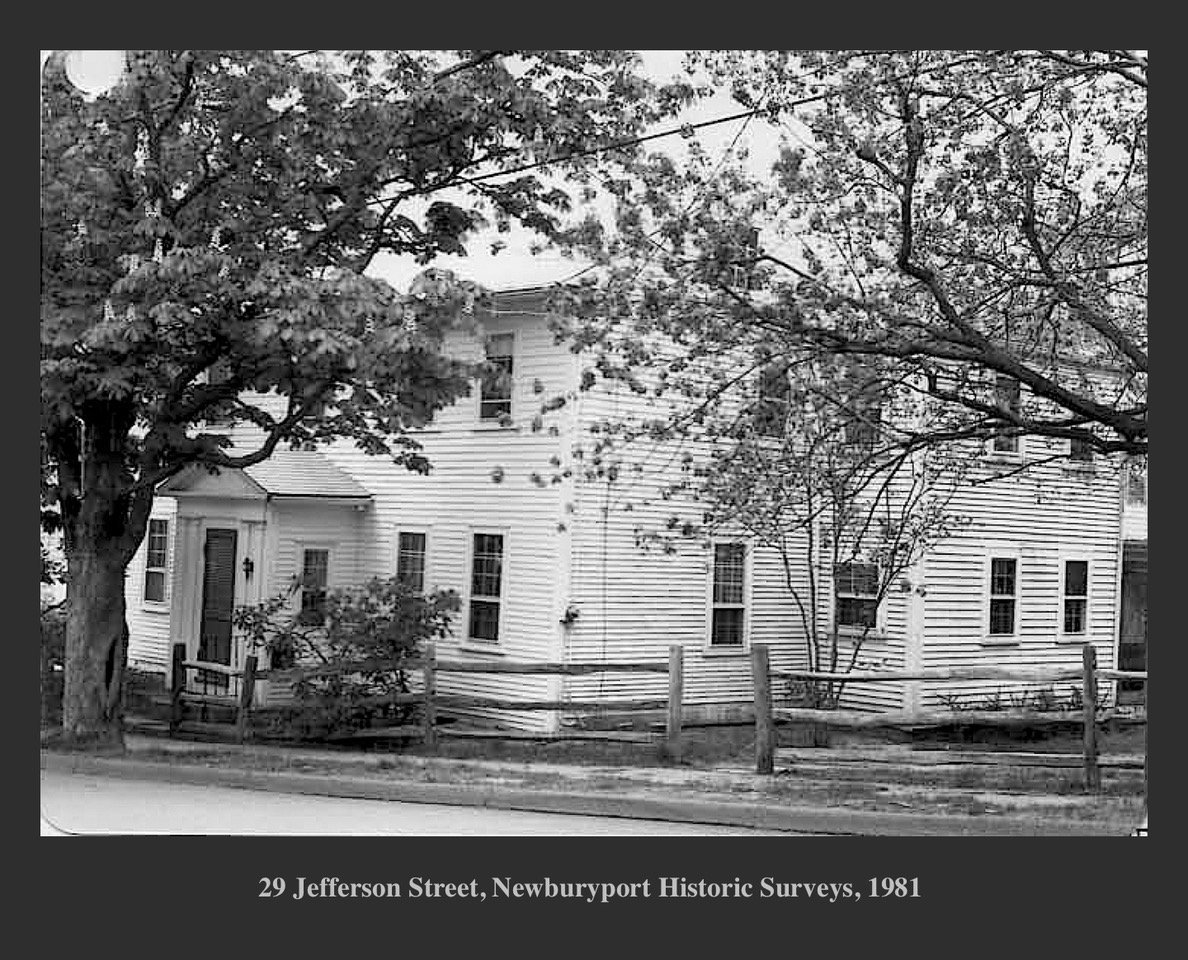 The owner of 29 Jefferson Street in 2022 told me that the mason that fixed the chimney put the house at around 1750. The first documented owner that I could find was Joseph Coffin (1785–1868). Joseph is a direct descendant of Tristram Coffin (1608 -1681) one of the first settlers of Newbury who ran the ferry to Carr Island from the Newbury side at the end of Jefferson Street. 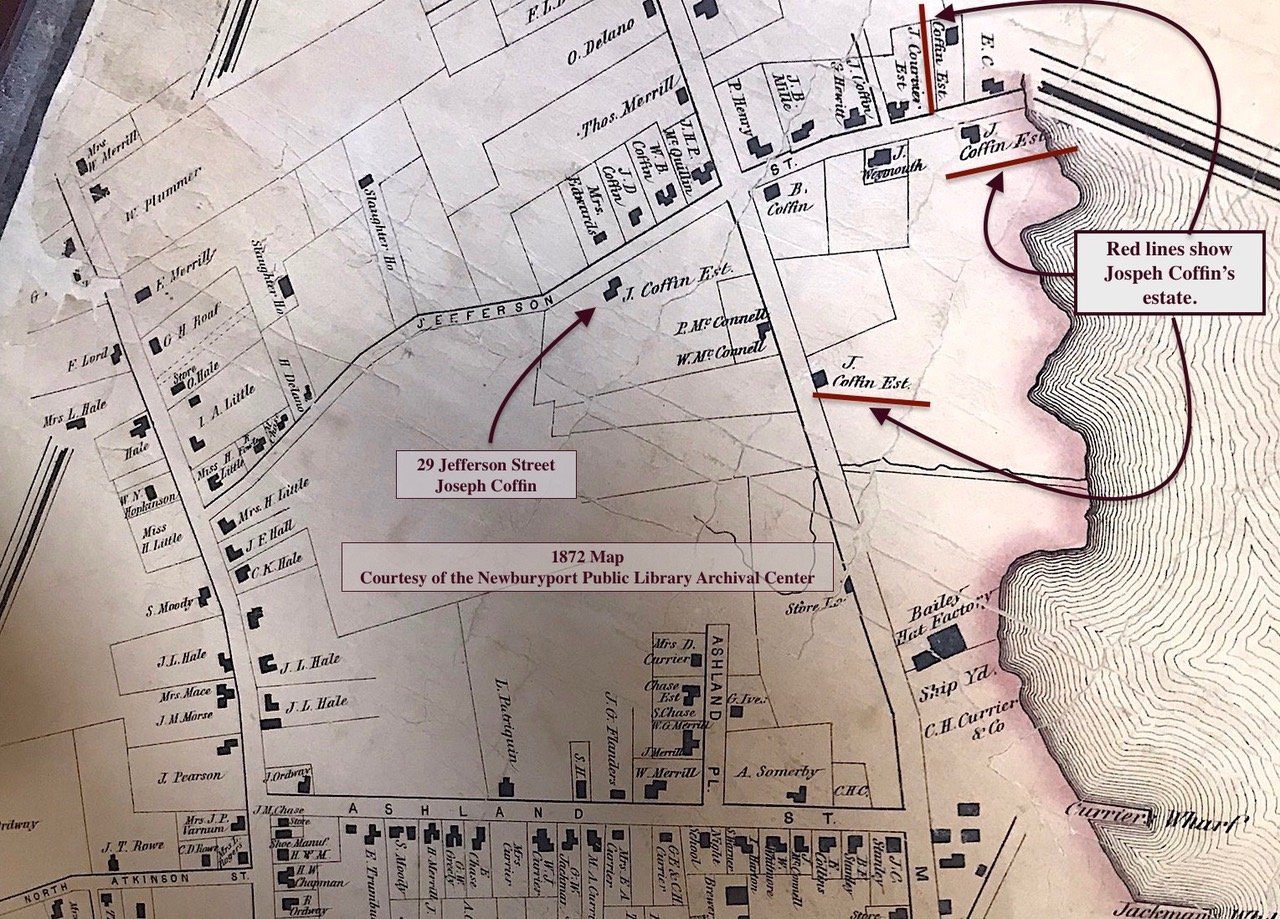 Joseph’s grandfather was Benjamin Coffin (1710 – 1784), and in Benjamin’s will* he left his his “ship building yard with all its privileges” at the bottom of Jefferson Street to his three sons, Stephen, Amos (Joseph’s father) and Lemuel Coffin. The shipyard at the bottom of Jefferson Street goes back to at least the 1700s. There is very little known about the shipyard, and the fact that there is a document, the will, about the shipyard adds to the small amount of history that is understood about it. Robert Cheney in his book, “Maritime History of the Merrimac: Shipbuilding,” has Joseph Coffin and his relative Samuel Coffin as the first major ship builder at the end of Jefferson Street around 1810.*** John J. Currier has Benjamin Coffin, who bought the land from Moses Coffin in 1763.*^* Benjamin Coffin’s will of 1784 shows that the shipyard belonged to Joseph’s grandfather and aligns with the account by John J. Currier. In Joesph Coffin’s probate (1868), he lists a “Ship-yard at the foot of Jefferson Street,” as well a “Half a ship yard on the Merrimac River,” and a “Ship-yard on Merrimac Street.”

Will of Benjamin Coffin 1784, leaving his ship building yard to his three sons Stephen, Amos and Lemuel Coffin.

Benjamin Coffin may well have built 29 Jefferson Street, in his will he left his house to Joseph’s uncle Lemuel. I have not been able to figure out how Joseph acquired the house, I have not found a deed or a will, but he most definitely owned it. It is listed in his probate records,** as well was the newspaper, selling the estate,^^ The 1872 Map not only shows Jospeh’s house but also a large estate including land on Jefferson Street, as well as land along the Merrimac River and Merrimac Street where the shipyards would have been, as well as other houses and land which he rented out,^* all of which were sold in 1872.^^ 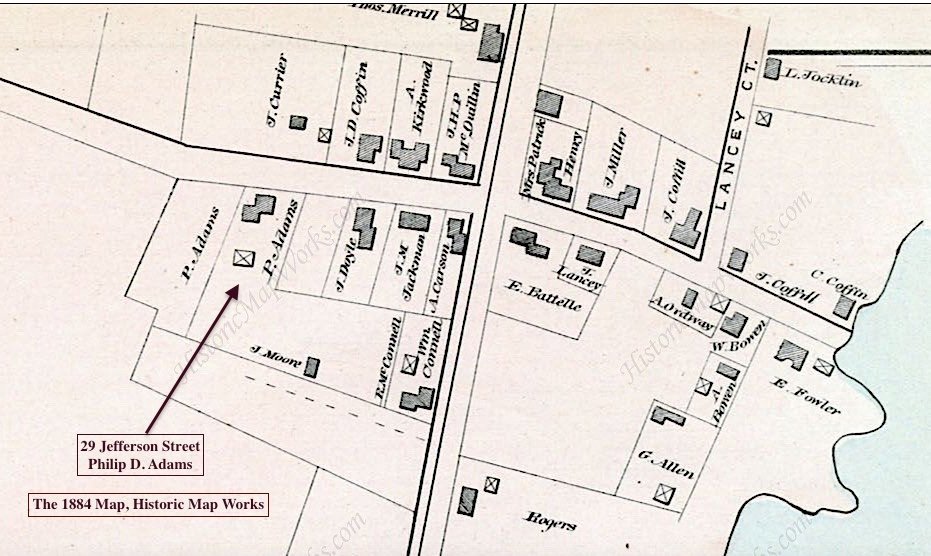 The 1884 map shows that Joseph’s land was divided up. His house had been sold to Philip D. Adams who was a teacher in Newburyport and lived on High Street. It seems that he rented it for 20 years before letting his son Frank and his new wife live there in 1893.^*^ He gave the house to Frank in 1906, and Frank’s widow Carrie sold it in 1928 after Frank’s death. Philip Adams married Ruth Coffin who was the daughter of Joesph Coffin, Philip bought his father-in-laws house and Frank was Joseph’s grandson. The house stayed in the family from when it was built, possibly by Benjamin Coffin in the 1700s to when Frank Adams died in 1928. There is a brief mention in the paper when the house was sold that it had been neglected and was going to be restored by Edward Hoyt who had bought the property.^^^ 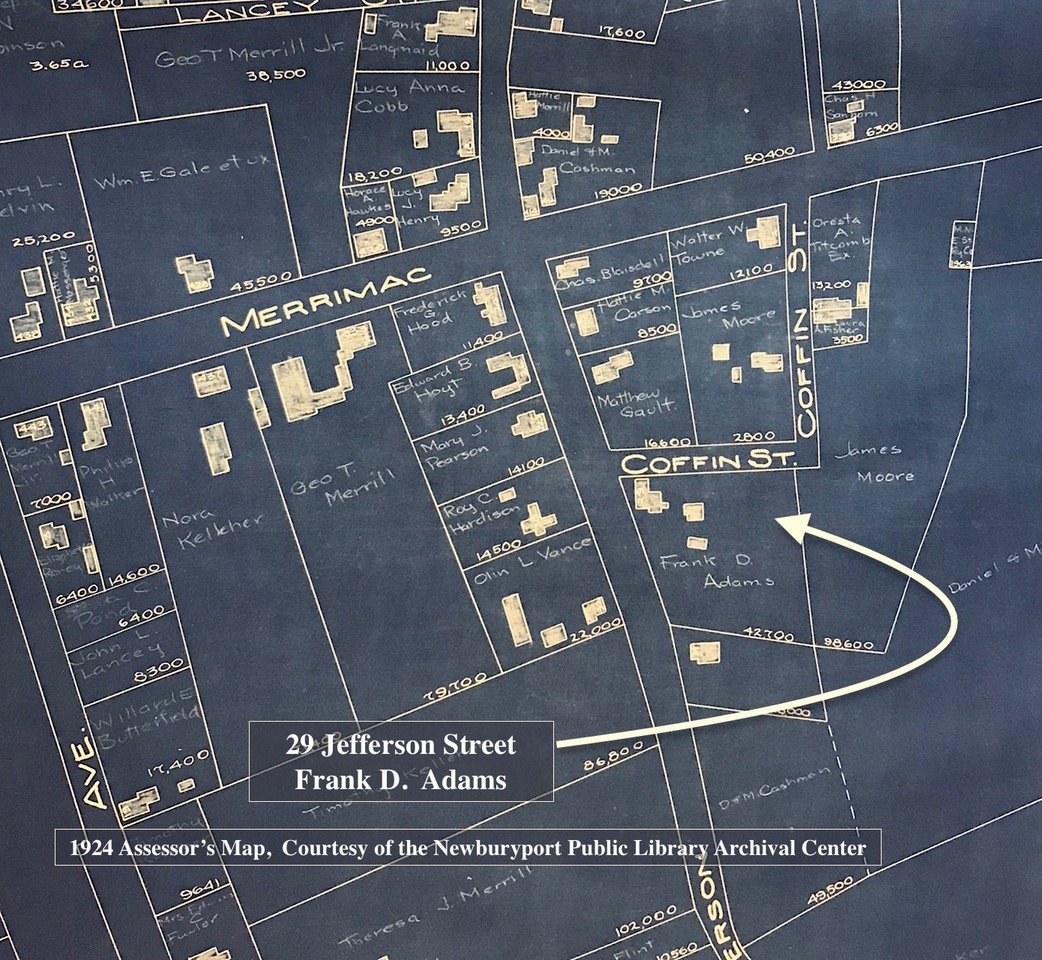 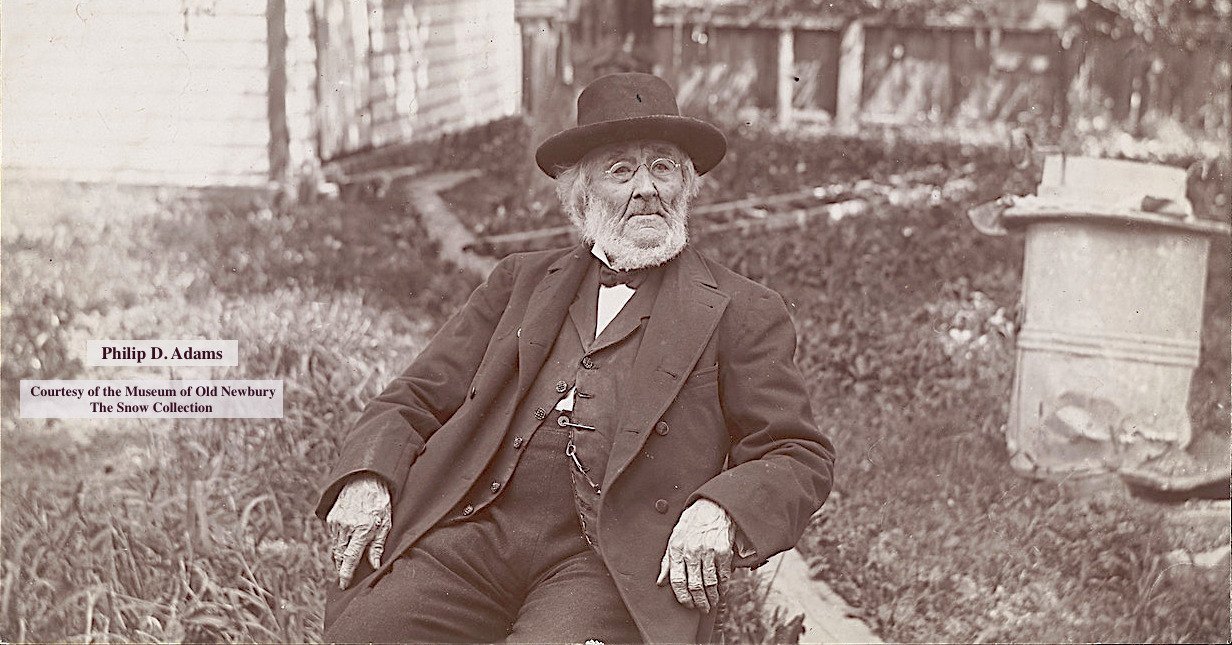 Philip D. Adams, The Snow Collection, Courtesy of the Museum of Old Newbury 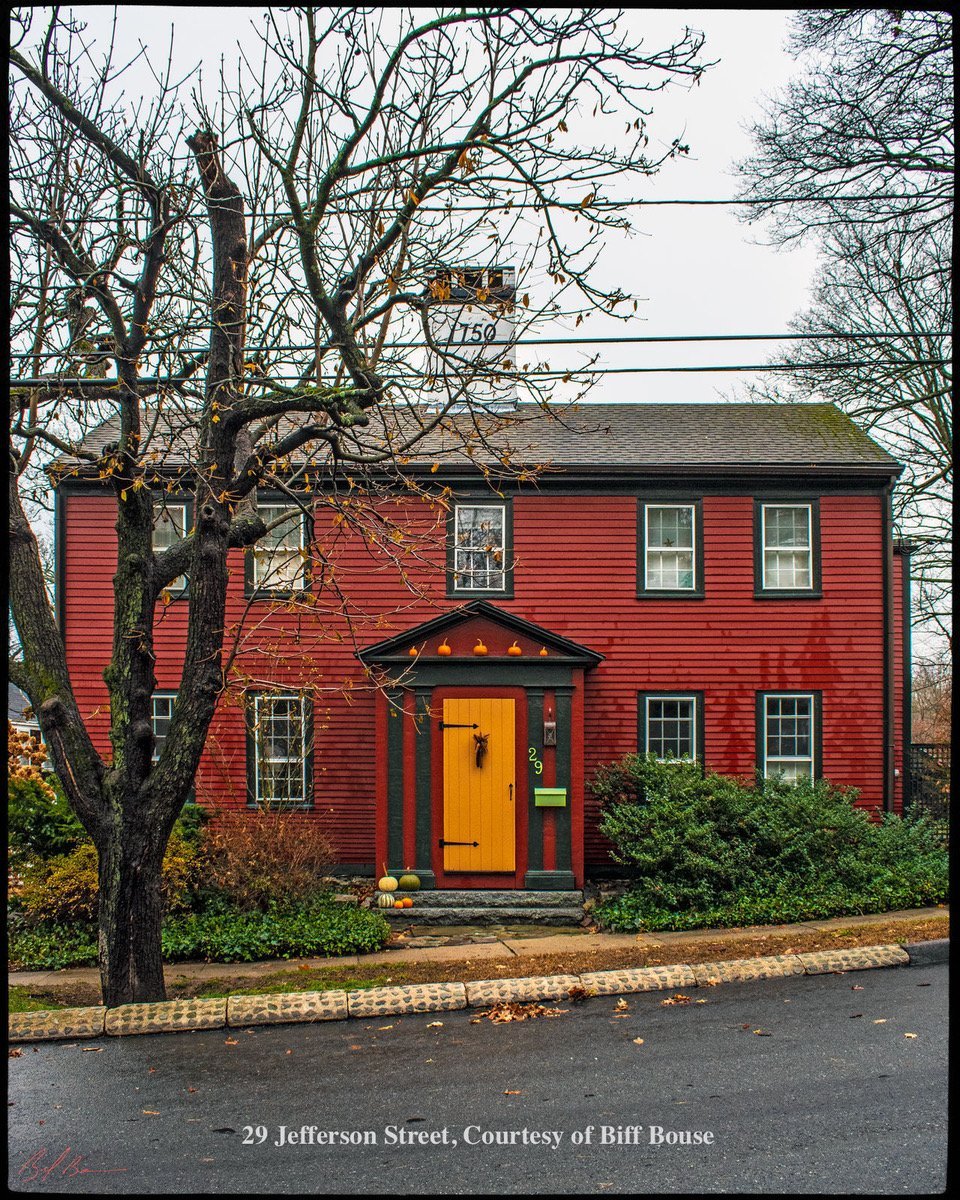 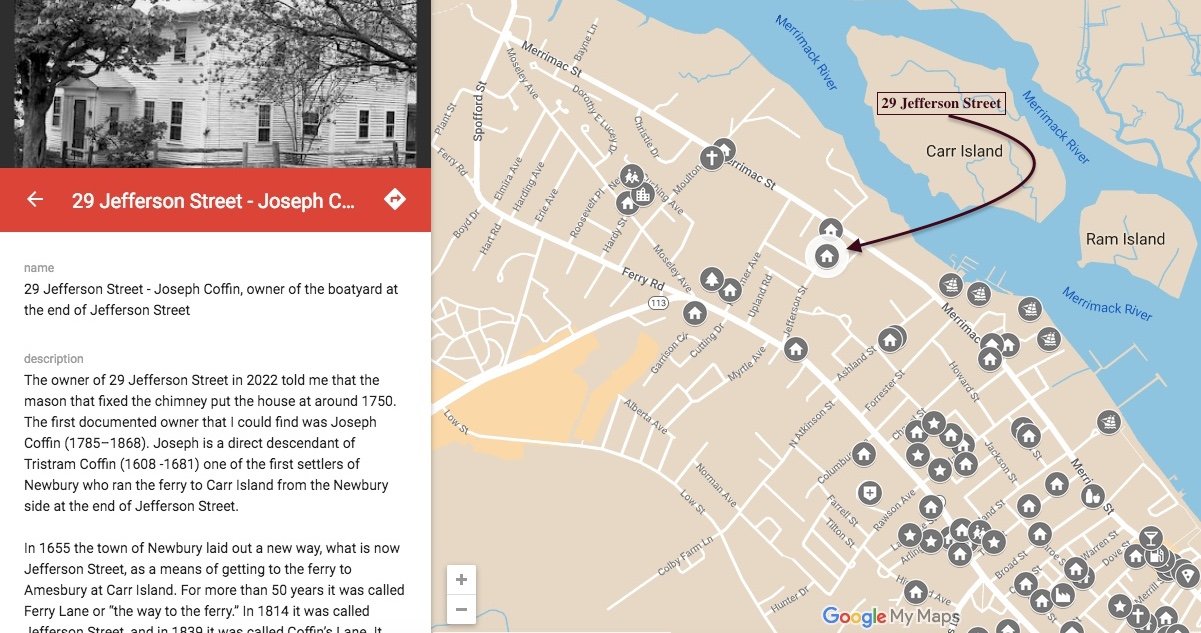 More posts by MaryBakerEaton
Next