Cashman Park – Created in 1922 where wetlands once existed 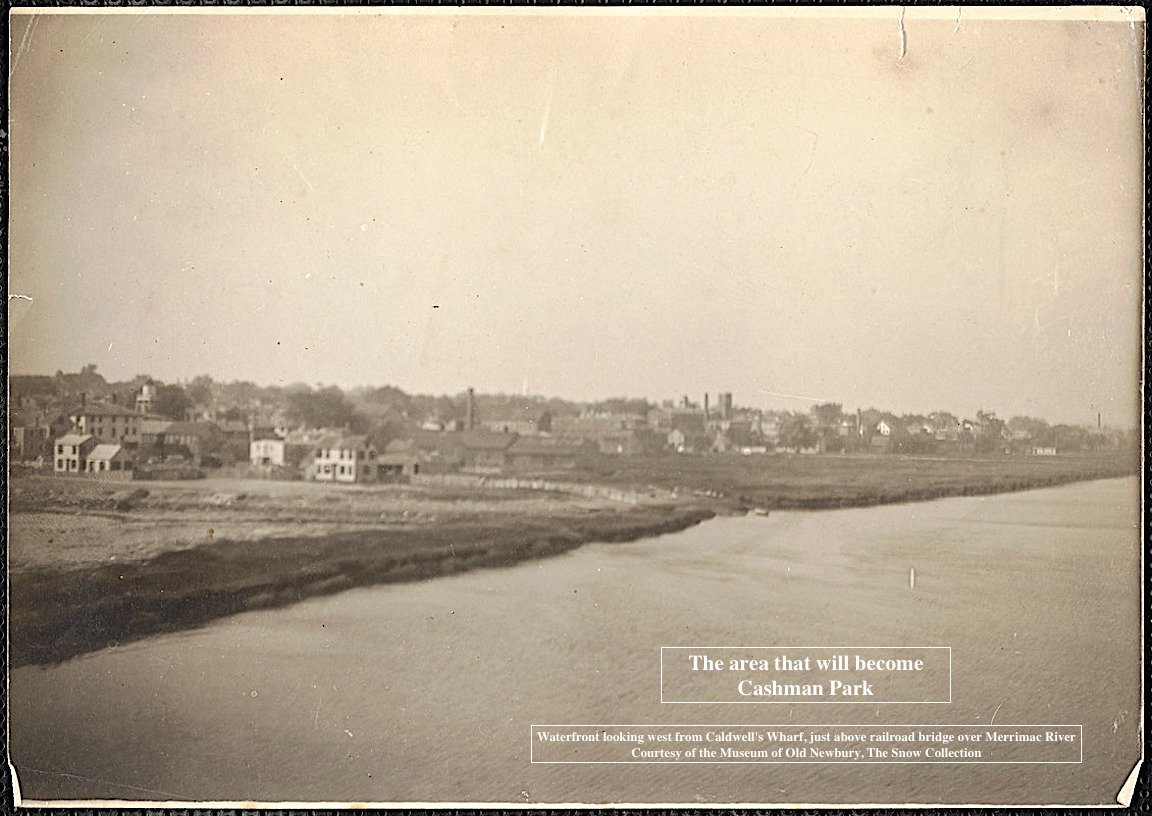 Wetlands that would become Cashman Park.

“Waterfront looking west from Caldwell’s Wharf, just above railroad bridge over Merrimac River,” Courtesy of the Museum of Old Newbury, The Snow Collection

On the 1851 Map where Cashman Park exists today was water and marsh. Michael Cashman had a vision for a park in 1912, that vision became a reality when he became mayor in 1922. At the time it was a radical idea and it is an incredible addition the city of Newburyport, which has been enjoyed for generations.

On the 1851 Map, where Cashman Park is today, was water and the low watermark, there was no land there at all. In 1912 Michael Cashman looked at the land that is now Cashman Park and what was, “Debris and trash – a mess,” “A plague to the eye,” “A most unsightly spot,” “More or less tumbled-down building, bog, marsh, rubbish, rises and declivities—jumble of plenty of non-appealing places.”* Mr. Cashman had, “A vision of what could be done, in his mind’s eye he could see a park,”* and much which of what he envisioned has become a reality. 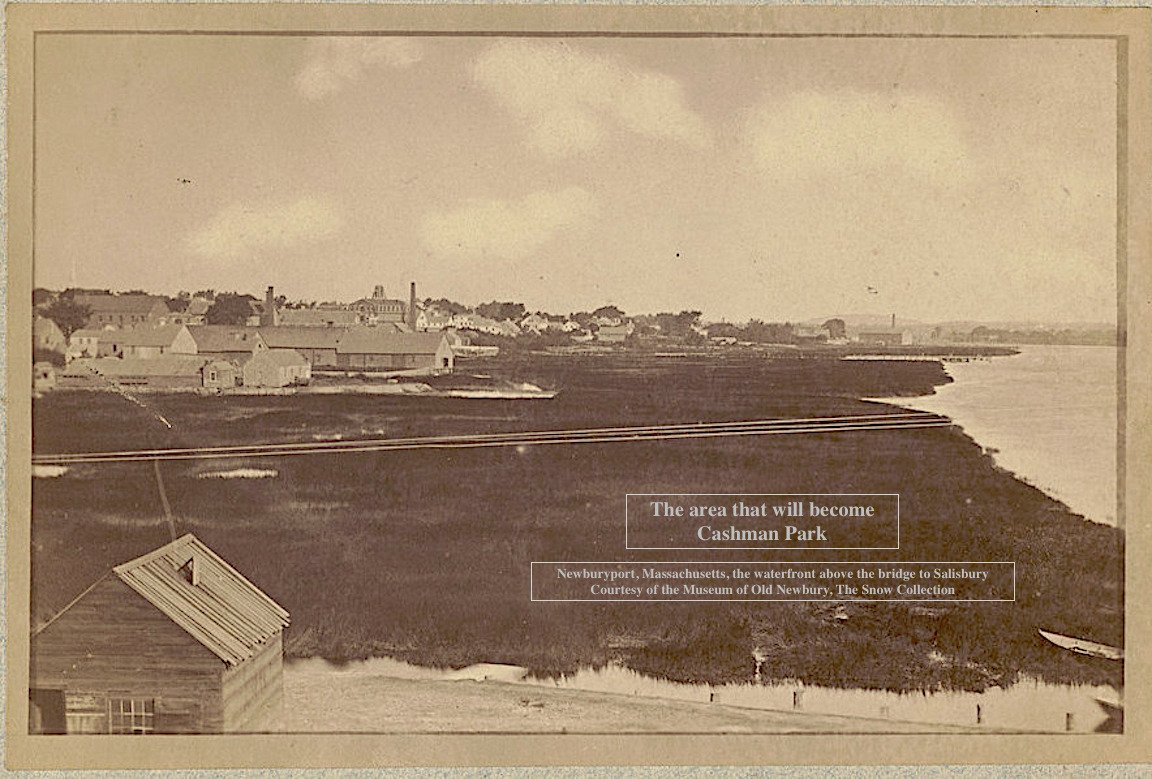 Wetlands that would become Cashman Park.

“Newburyport, Massachusetts, the waterfront above the bridge to Salisbury,” Courtesy of the Museum of Old Newbury, The Snow Collection

“Jeremiah Cashman was a laborer during 1850-1880, but he managed to buy about $1,000 in real estate, which two of his nine children used after his death to establish the firm of the Cashman Brothers. Michael Cashman took over the business eventually, and became one of the richest coal and oil dealers in Essex County, only after this kind of success did he venture into politics and win election as mayor of Newburyport.”** 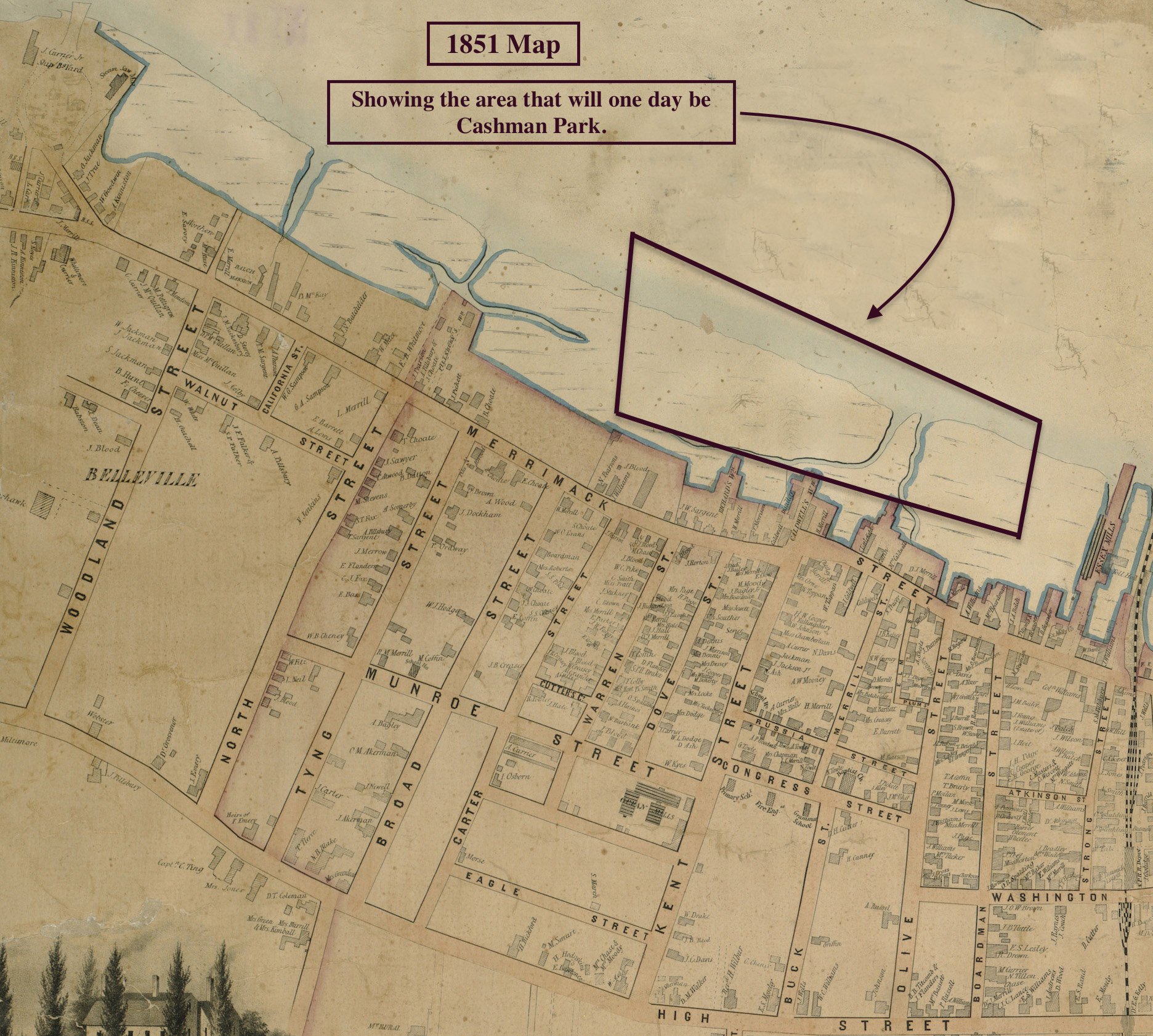 Michael Cashman (1865-1945) was the mayor of Newburyport from 1922 – 1925, however it was in 1912 that he had the vision for the park, and in 1913 he had a survey done of the proposed park.* When he became mayor in 1922 he was able to make his vision happen. One of the things Mayor Cashman wanted on the proposed 18 acres of land was a playground, “I believe it to be nearly as important for our youth to have opportunity for physical recreation as it is for them to get an education—for of what benefit is it to the child to develop mentally and not physically? A child, in order to become a real asset to the community should have the opportunity for both mental and physical development.”* At the time this was a radical idea, please see “The Playground Act of 1908 – Playgrounds were Controversial” on Interactive History Map and this website. 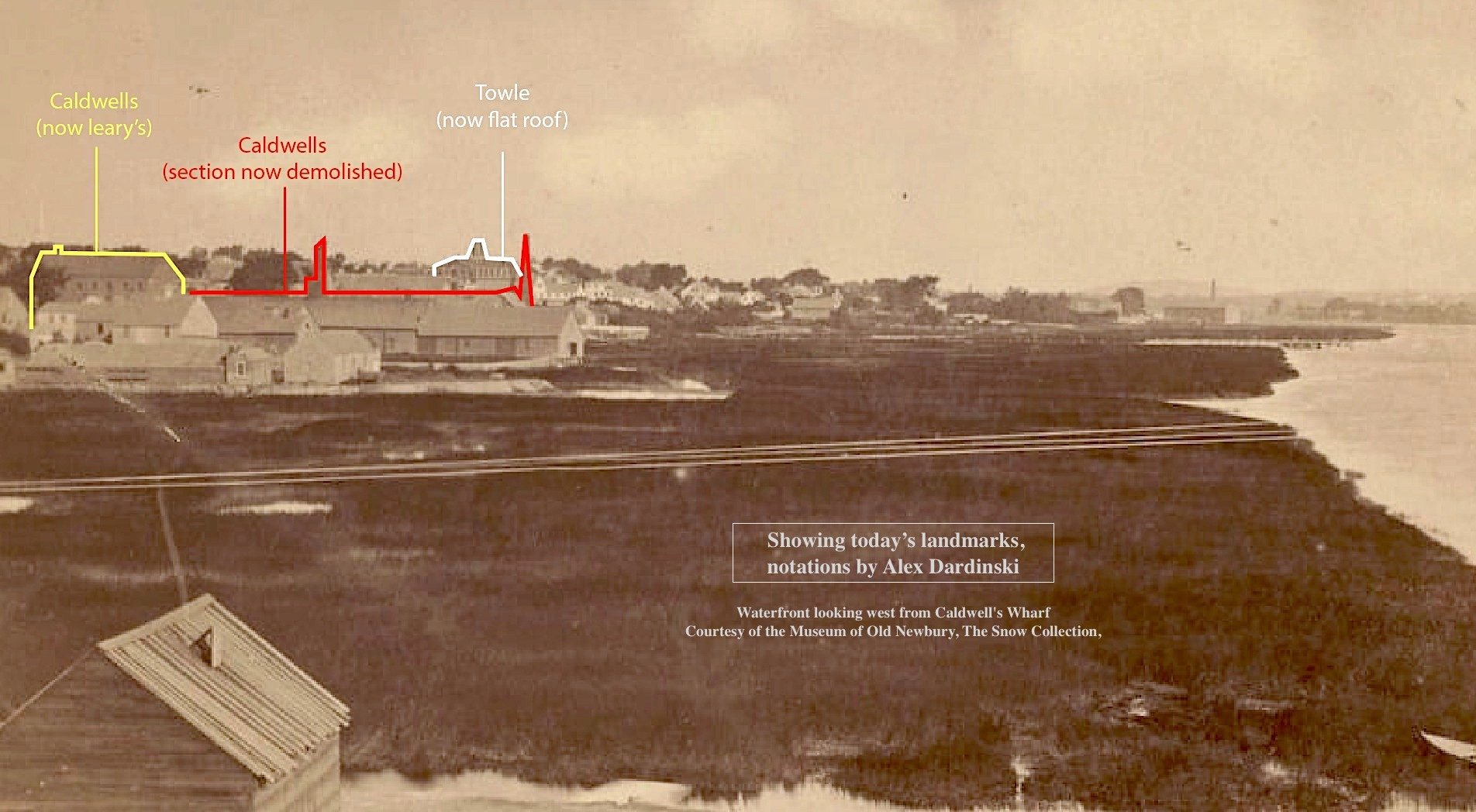 “We have a beautiful river flowing past our doors, yet as near as it is, it is impossible for any of our residents to go near enough to it to enjoy the beauties of the river without trespassing on private property. Newburyport has no playgrounds in which the young can enjoy themselves.”*** Filling in wharfs and wetland and water was not a new concept, when the railroad came to Newburyport’s Waterfront the land between the wharves was filled in. In 1922 there was no public access to the river from Market Square that exists now today, please see “Ferry Wharf and Merchant’s Row” on this website and the Newburyport Interactive History Map as well as “Coal, the Railroad and the Central Waterfront” on the Interactive Map. 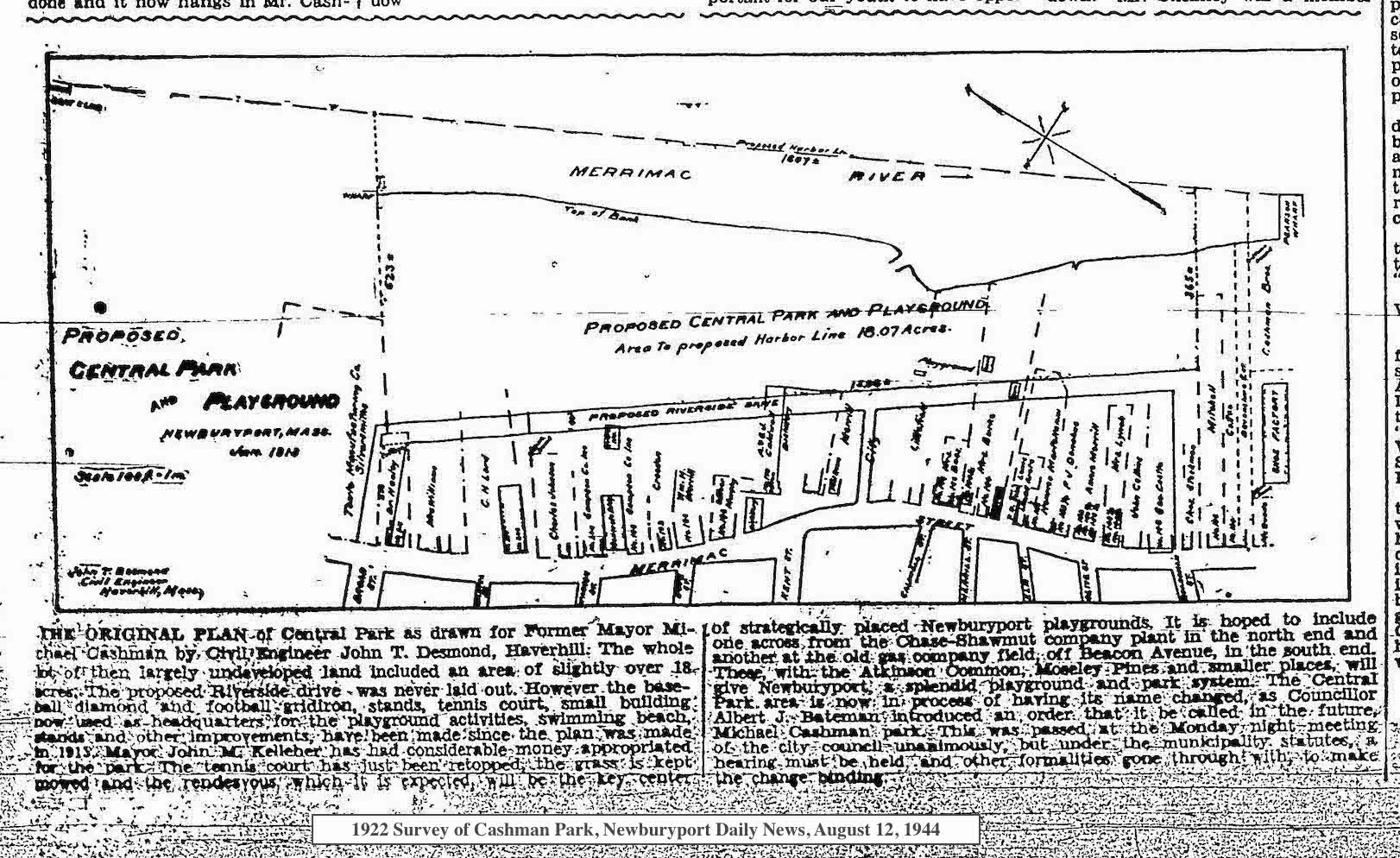 Creating the park meant taking land by eminent domain, but there was very little pushback from the abutters. In the Newburyport Daily News, all the way back in April 9, 1913, there was an article on the front page about a hearing on new park, “Owners of the land or their representatives were enthusiastic over the project and saw an opportunity to aid in public improvement and they also realized that the plan would work in their own advantage as well.”^* 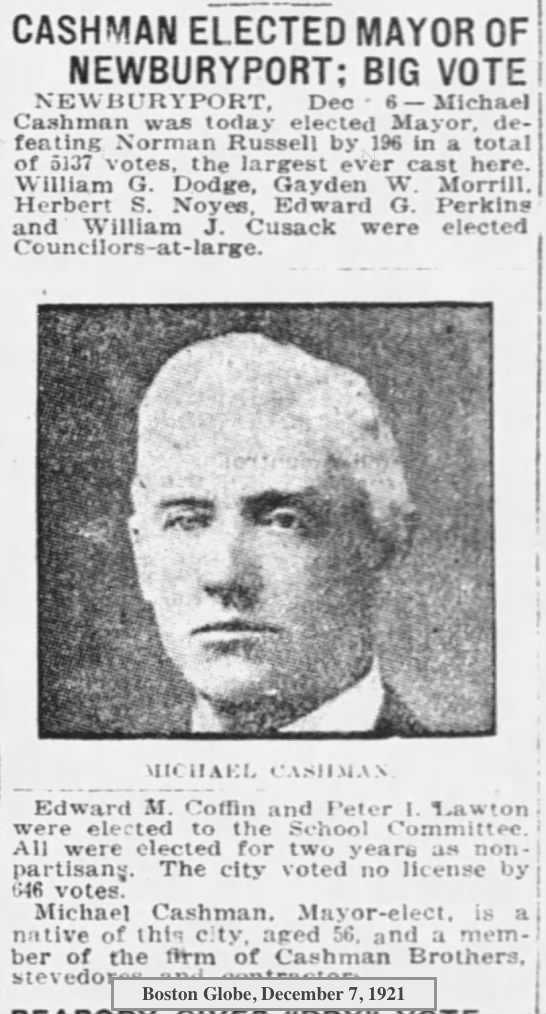 When Michael Cashman became mayor, “Central Park, the original name, was soon home to baseball games, football contests between Amesbury and Newburyport, Boy Scout jamborees, and other recreational activities. While in office Mr. Cashman refused to be the namesake of the new park. Finally he accepted in 1944, a year before his passing. Cashman Park is one of the most popular parks in the city and is one of the northern gateways for the Clipper City Rail Trail.”*** 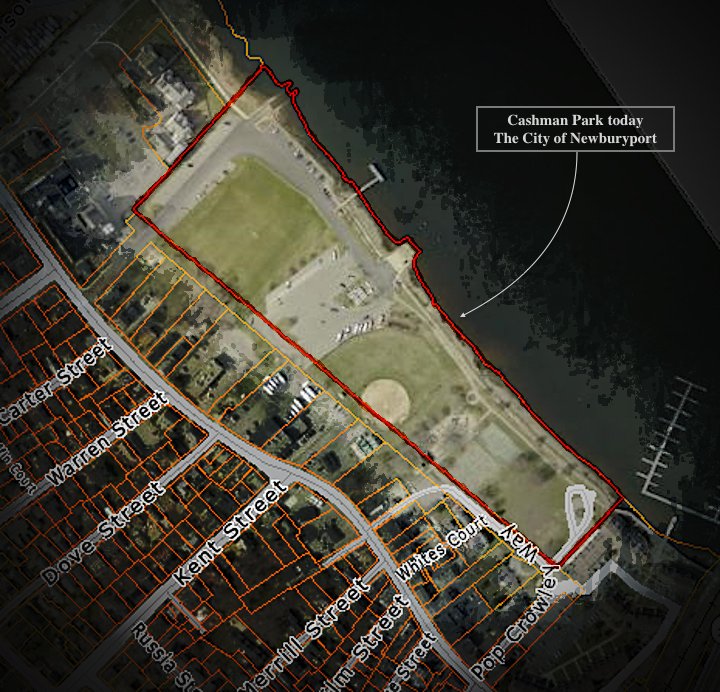 Map of Cashman Park today, the City of Newburyport, the Planning and Development Department, Newburyport MIMAP

Today Cashman Park has a beautiful playground, tennis and basketball courts, soccer and baseball fields, as well as a boat ramp, which is available to the public, and places to walk, sit and bike along the Merrimac River. Mr. Cashman’s vision lives on and has been enjoyed by countless people since its conception in 1912 and its creation ten years later. Looking at Cashman Park in the context of what I have learned creating the Newburyport Interactive History Map, it is in contrast to Henry Moulton’s vision of Moultonville which has faded from the city’s landscape (please see Moultonville on this website and the Interactive Map), Mayor Cashman created a public oasis that has been enjoyed for generations. 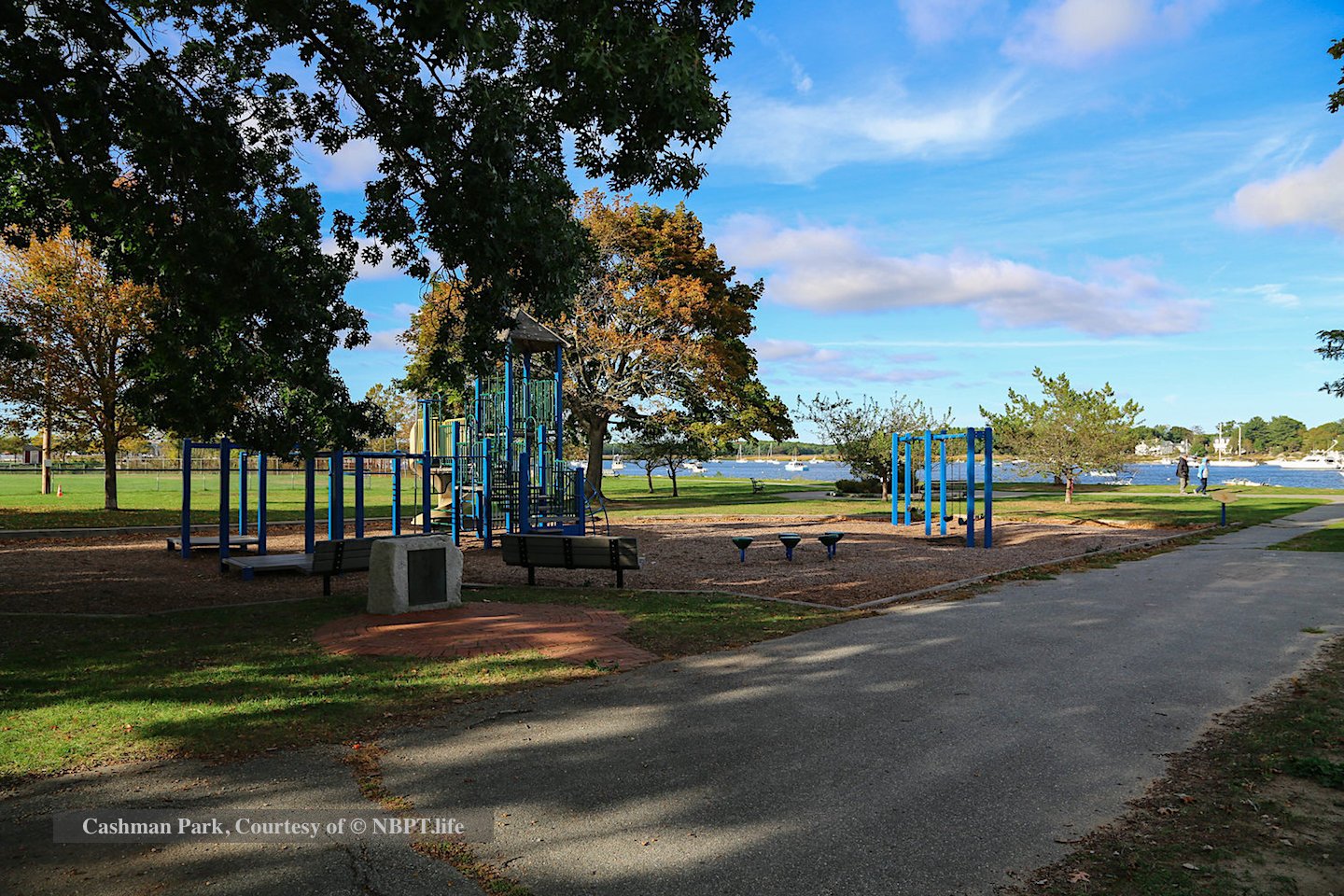 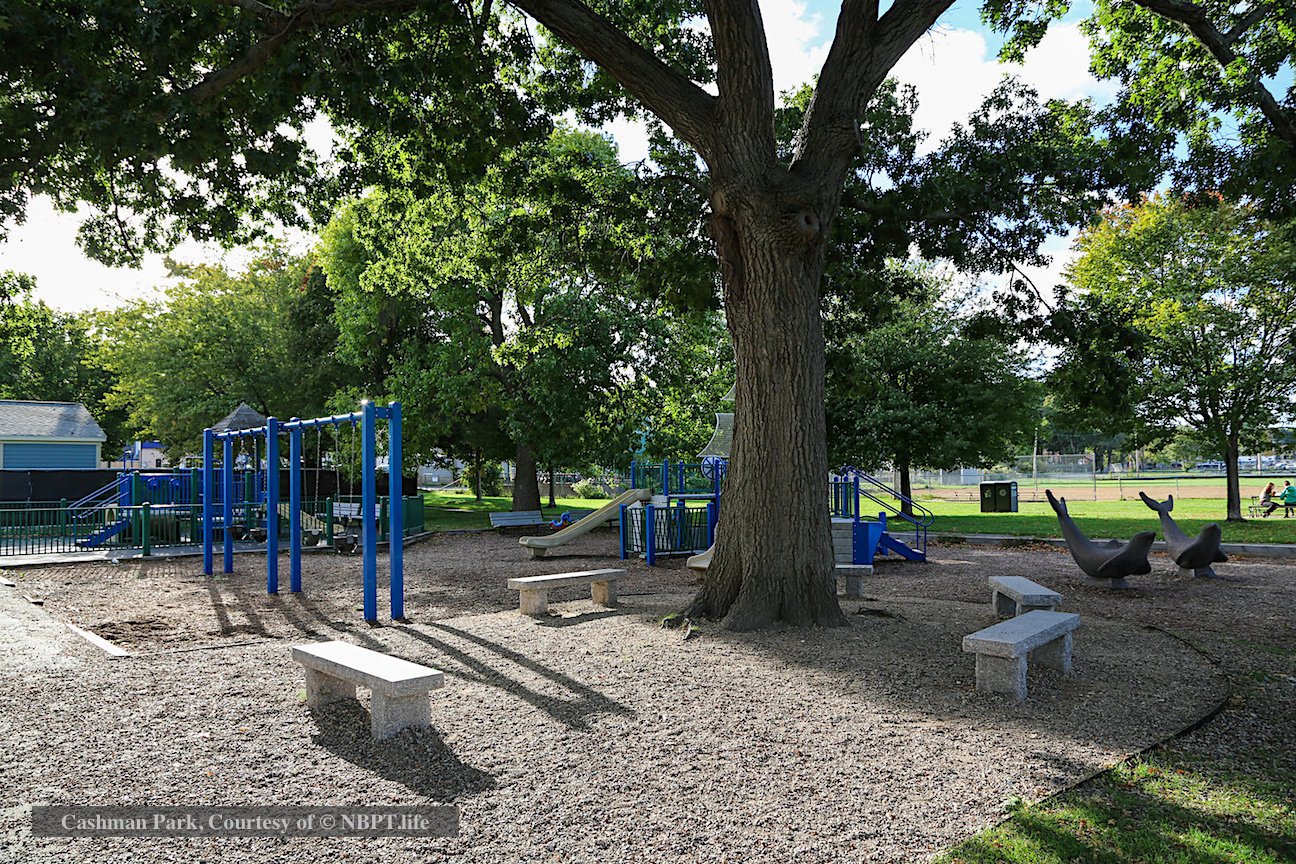 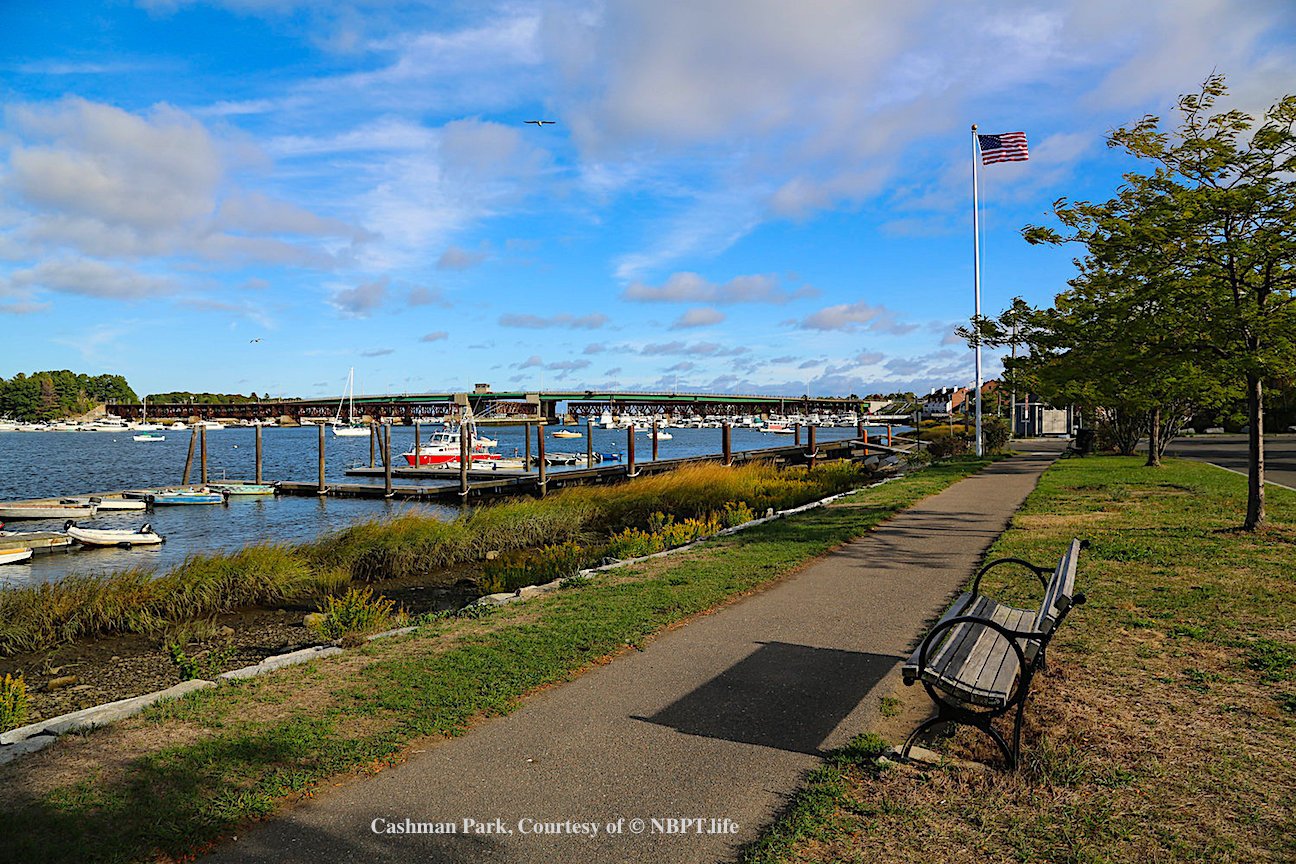 A huge thank you to NBPT.life for permission to use gorgeous photographs of Cashman Park.