At 69 she turned to her family’s stories and Newburyport’s history and began writing books for young adults, she lived at 270 High Street. 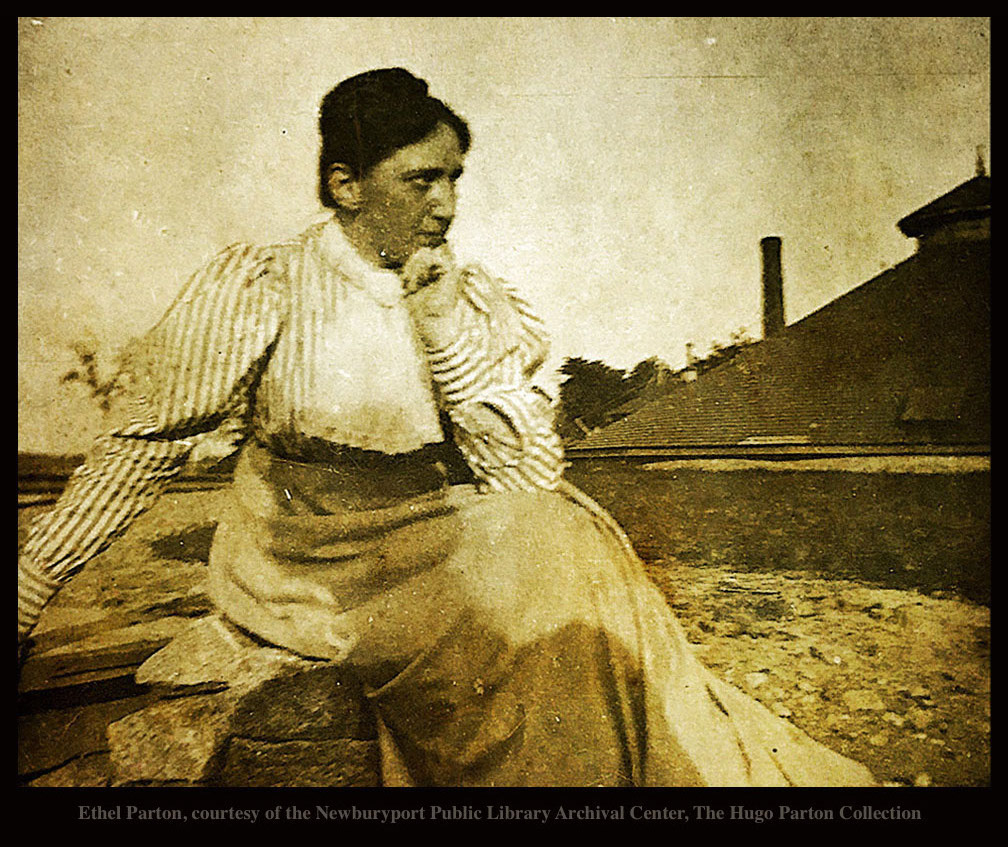 Ethel Parton (1862 – 1944), was a famous writer of children’s books about 19th-century life in Newburyport, MA, which were published in the 1930s and 1940s. At 69, she turned to her family’s stories and Newburyport’s history and began writing books for young adults. Reviewers equated her books with those of Laura Ingalls Wilder, which were appearing at the same time.**

“I turned to the city where I live, whose history and traditions I have absorbed…from living lips, as they are passed down, even today, in fine old deeply rooted families. I have been able to weave into a fictional narrative also many true incidents told me by my aunt.” Five books called “The Newburyport Chronicles,” are set in a particular historical period of Newburyport in the 1800s. They became well-known and well-loved.^^**

“Penny waked to find the sunlight streaming into her room and flashing back from the weathervanes and window-panes among the clustered houses and soaring steeples of the town that lay slanting away below her on its sloping streets toward the river as she looked down upon it from her high eastern window.” – Penelope Ellen, by Ethel Parton, (It is speculated that 89-91 High Street, which is on the “Ridge” in the South End of the Newburyport, was the model for the house in the book.)** 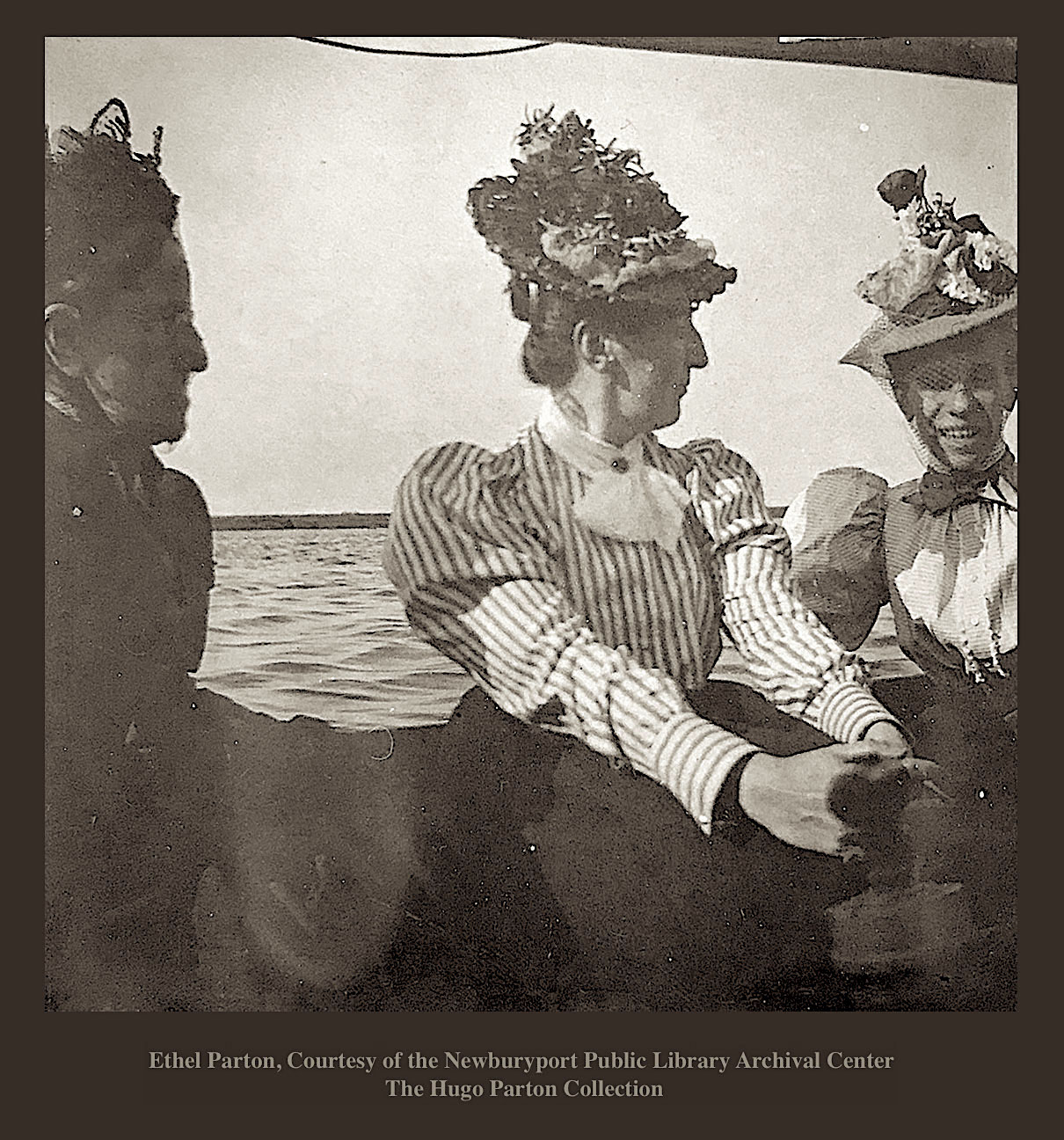 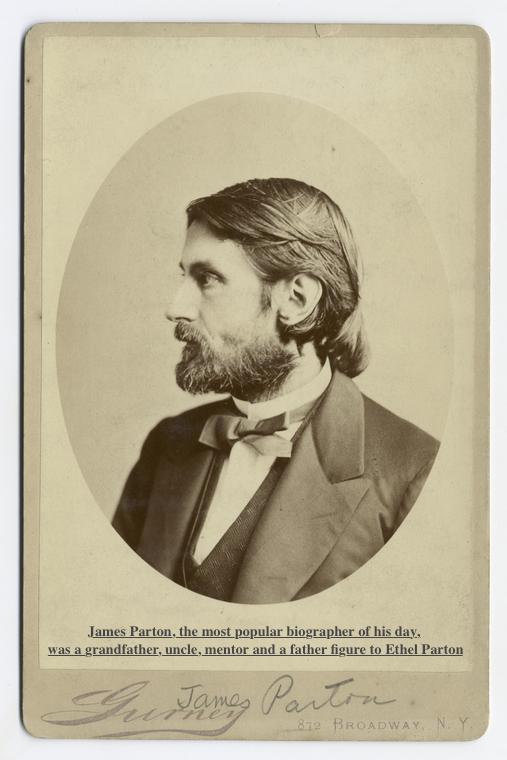 James Parton, both a grandfather, uncle, mentor and a father figure to Ethel 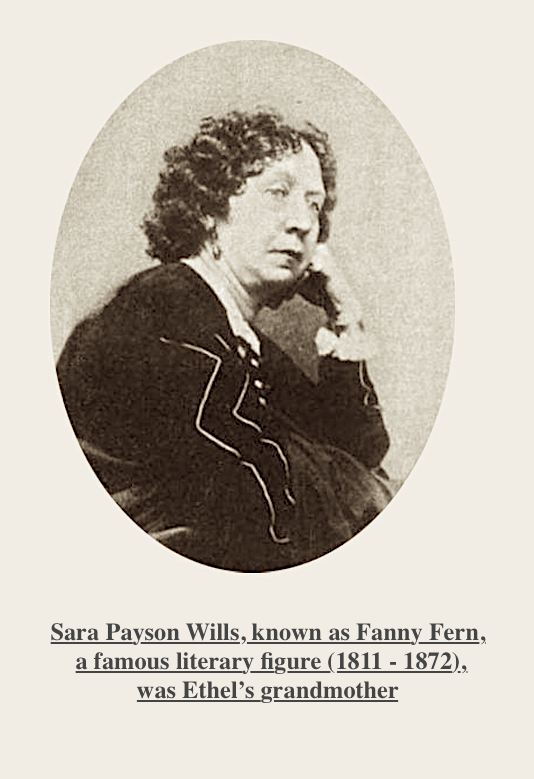 Sara’s Third marriage was to James Parton in 1856.
Sara and James raised Sara/Fern’s granddaughter, Ethel, who was orphaned at birth (Grace Sara’s older daughter, was her mother).
They lived in New York for 13 years until Sara’s death in 1872, James Parton was a widow.

James Parton (1822 – 1891) was one of the most popular biographers of his day^^*
James married Sarah/Fanny Fern’s daughter, Ellen, by her first husband Charles Eldredge, in 1876.
He raised Ethel as his own daughter with his first wife Sara/Fern and then with Ellen, his second wife.

Ethel and Ellen (Ethel’s aunt) moved to Newburyport in 1873, in those days it would not have been appropriate for a young girl and a young woman to remain living with an older man. Ethel was 11 and Ellen was 29. Ethel socialized with the prominent families in Newburyport – the Cushings, the Spoffords, the Dodges, the Littles, and relatives of the poet John Greenleaf Whittier, and from them she heard stories of Newburyport, stories that had been handed down through the generations and that would influence her writing of children’s books many decades later.**

James Parton had discovered Newburyport earlier while researching a biography and loved it. James visited Ethel and Ellen often and summered in Newburyport, and during those two years, James and Ellen realized they were in love. James left New York and moved to Newburyport in 1875. He married Ellen in 1875 (Ellen was 29 and James was 51) and bought 270 High Street. It turned out that the marriage was illegal in Massachusetts and James and Ellen were remarried in New York.**

In 1884 Ethel legally changed her last name to “Parton,” although she was never legally adopted.** 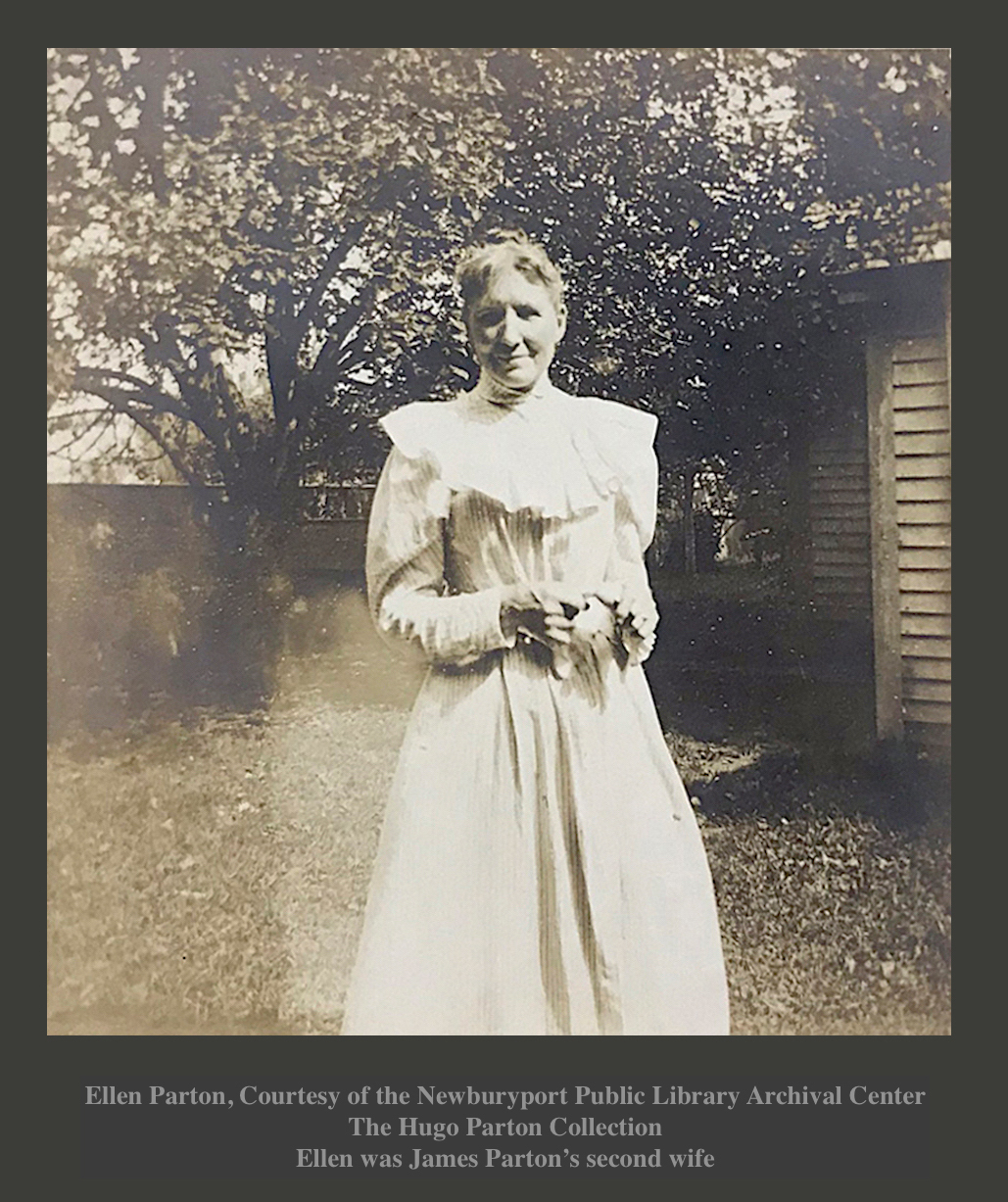 Ellen Parton, courtesy of the Newburyport Public Library Archival Center, The Hugo Parton Collection. Ellen was James Parton’s second wife and was both an aunt and a mother figure to Ethel. Ethel called her “Auntie-Mama”

In 1886 after the birth of his two children, Mabel and Hugo, James bought a larger house across the street (Oakland Street) at 272 High Street^* (James kept 270 High). Ethel’s biographer found that James Parton left everything to Ellen and Ethel jointly. Salem Deeds show James left both houses to Ellen.^* James died in 1891, he was 69, James and Ellen had been married 16 years, and James had lived in Newburyport for16 years.

Ellen sold the large house, 272 High Street, in 1900*^ and moved back to 270 High, the smaller house. It is thought that Ellen preferred the smaller rooms to the large, high ceilinged, hard to heat rooms of 272 High Street. Ethel lived with her aunt/mother the entire time until Ellen’s death in 1922, Ellen was 78, she had been a widow for 31 years. Ellen had been an aunt/mother to Ethel for 60 years, Ethel called her “Auntie-Mama.”** 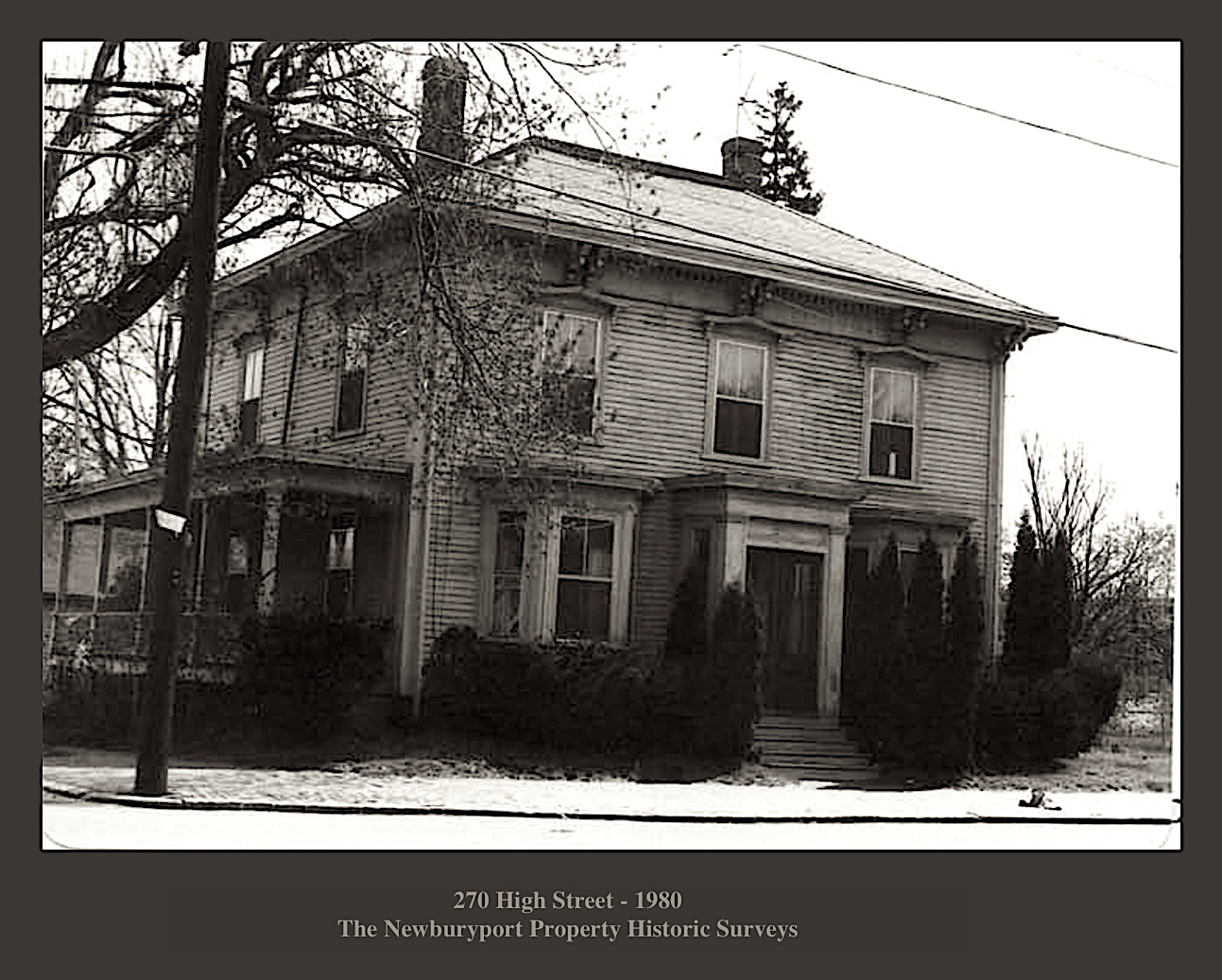 From 1891 through 1943, Ethel’s verse, ballads and short stories (most with historical themes and settings), and book reviews appeared in The Horn Book, The New Yorker Magazine, St. Nicholas, The Black Cat, The Outlook magazine, and Youth’s Companion, where she served on the editorial staff for more than 40 years.

At 69 she turned to her family’s stories and Newburyport’s history and began writing books for young adults, she lived at 270 High Street. Reviewers equated her books with those of Laura Ingalls Wilder, which were appearing at the same time.**

“I found it was for children I most wished to write. … I turned to the city where I live, whose history and traditions I have absorbed not from printed chronicles alone, but from living lips, as they are passed down, even today, in fine old deeply rooted families. … And I have found much enjoyment in trying to bring alive for American children of our own time a group of old-fashioned New England girls and boys.”– Ethel Parton, The Junior Book of Authors, Kunitz & Haycraft, eds, The H.W. Wilson Company, 1934

*These books draw upon the history of Newburyport and are known collectively as “The Newburyport Chronicles.” 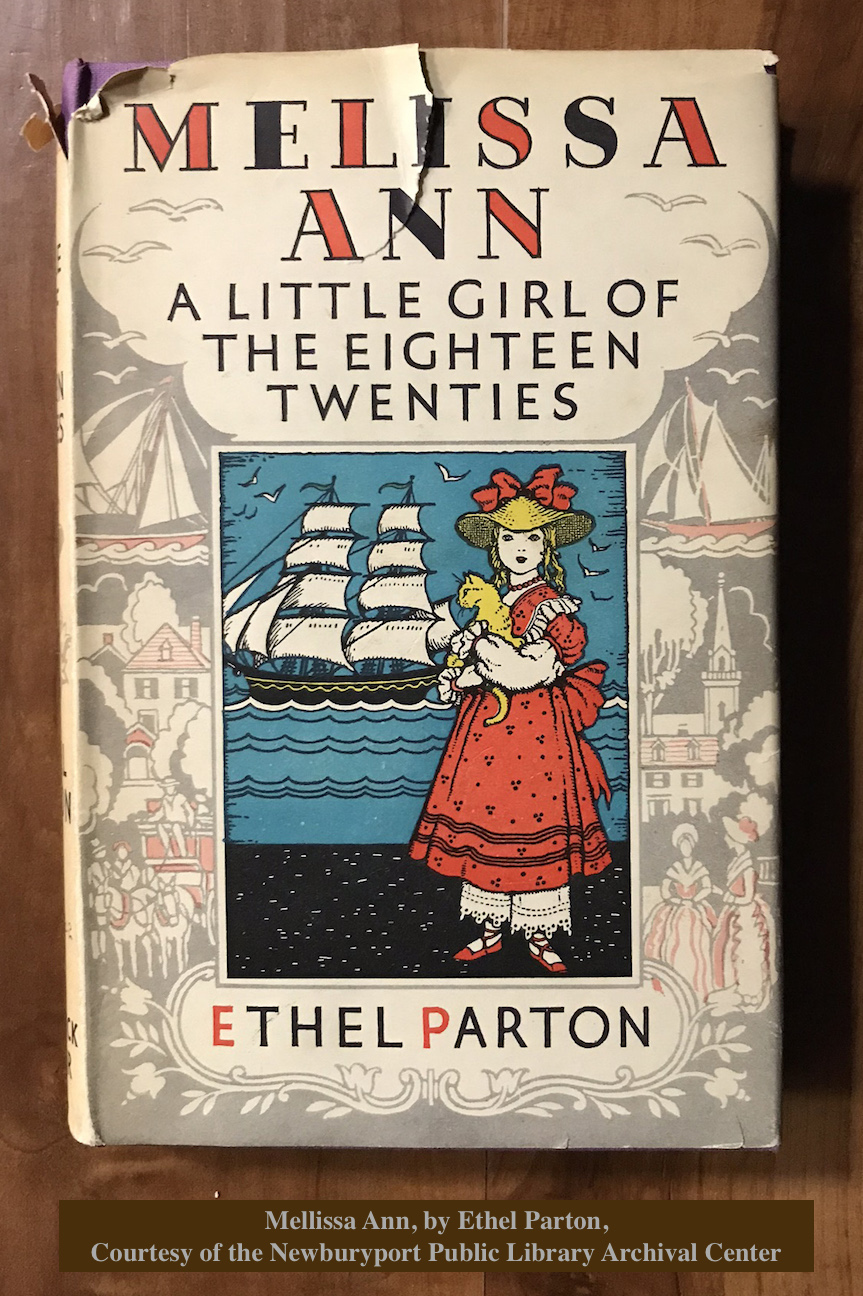 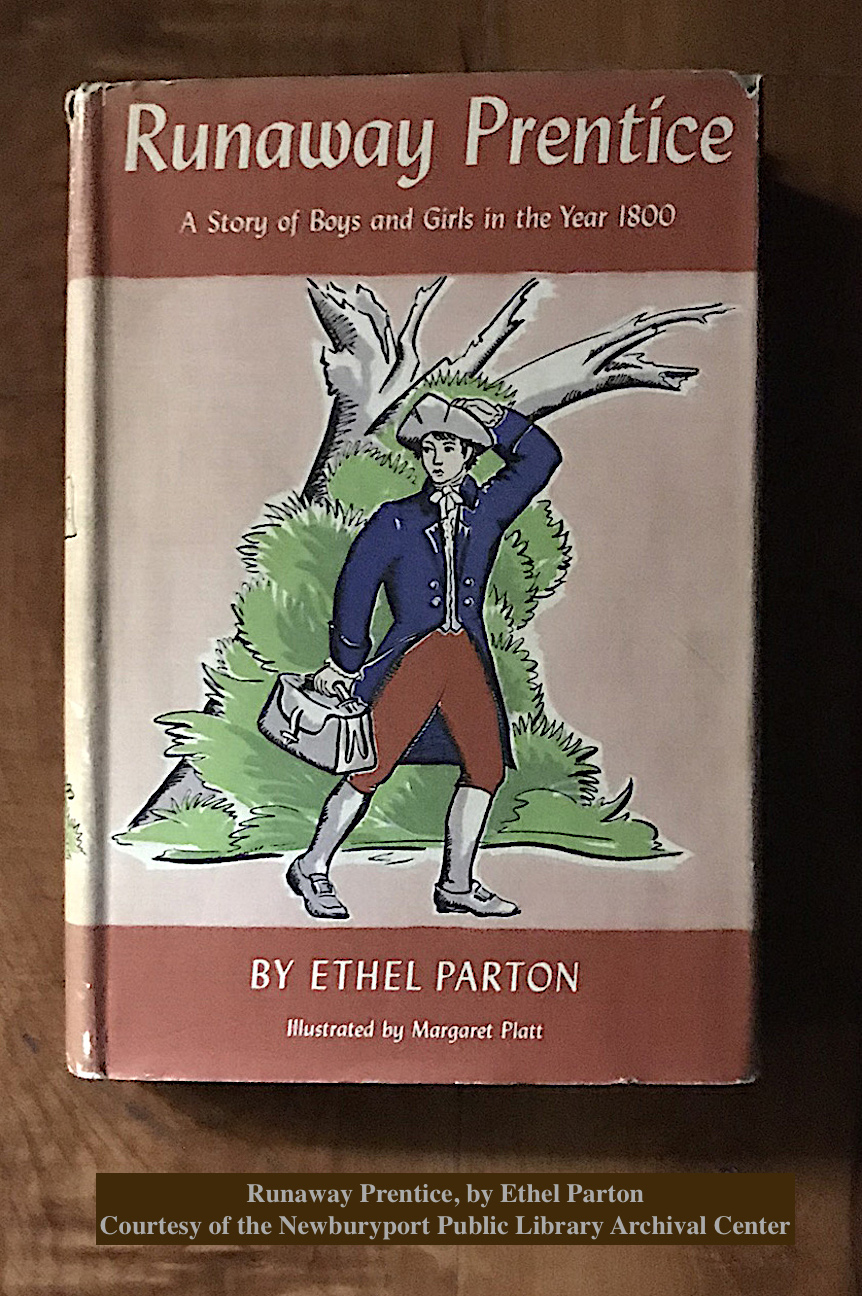 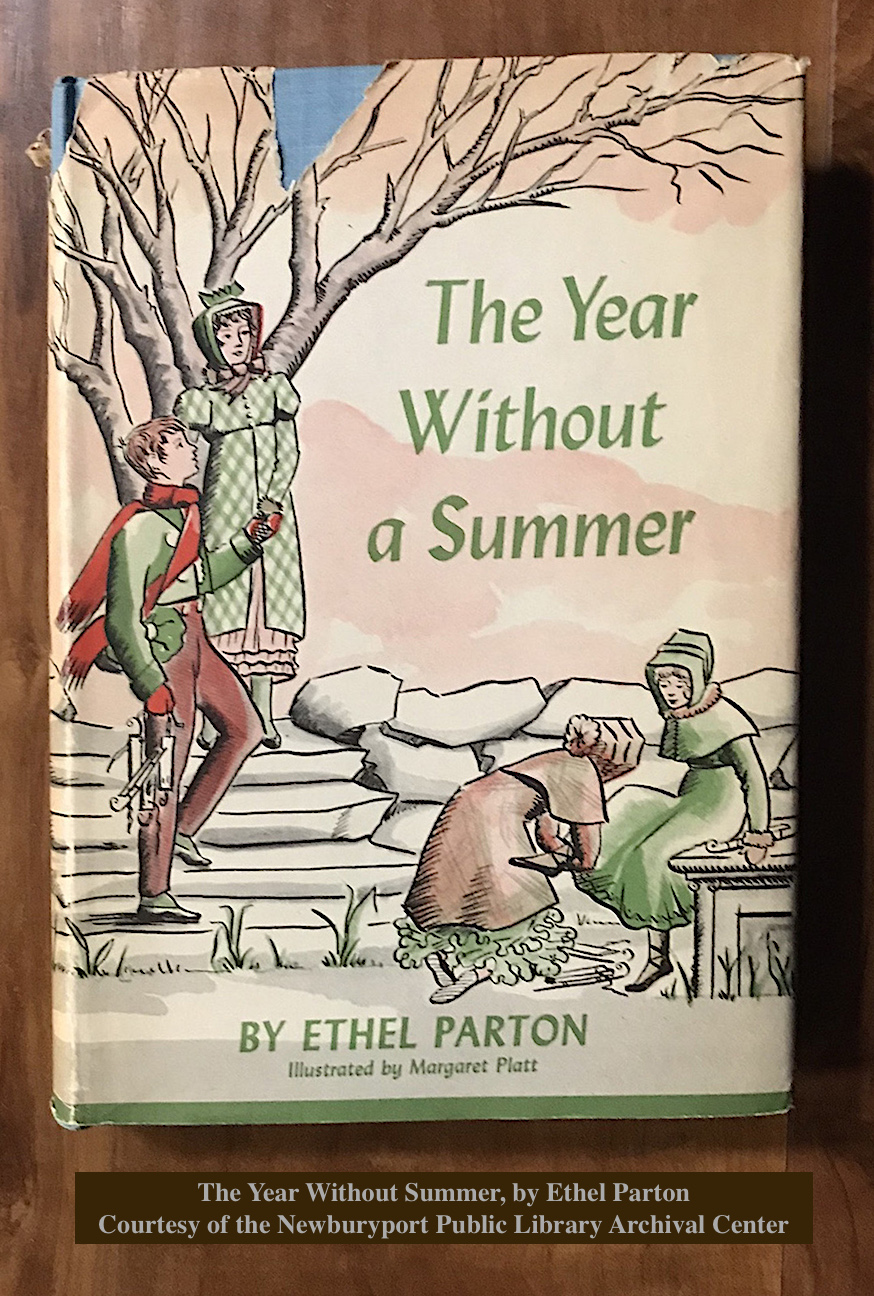 The Year Without a Summer, by Ethel Parton, courtesy of the Newburyport Public Library Archival Center

Many thanks to the Newburyport Public Library Archival Center for all their help, for letting me use The Hugo Parton Collection, Photo Albums and to Sarah Jensen, who is writing the biography of Ethel Parton.

** Sarah Jensen, who is writing the biography of Ethel Parton