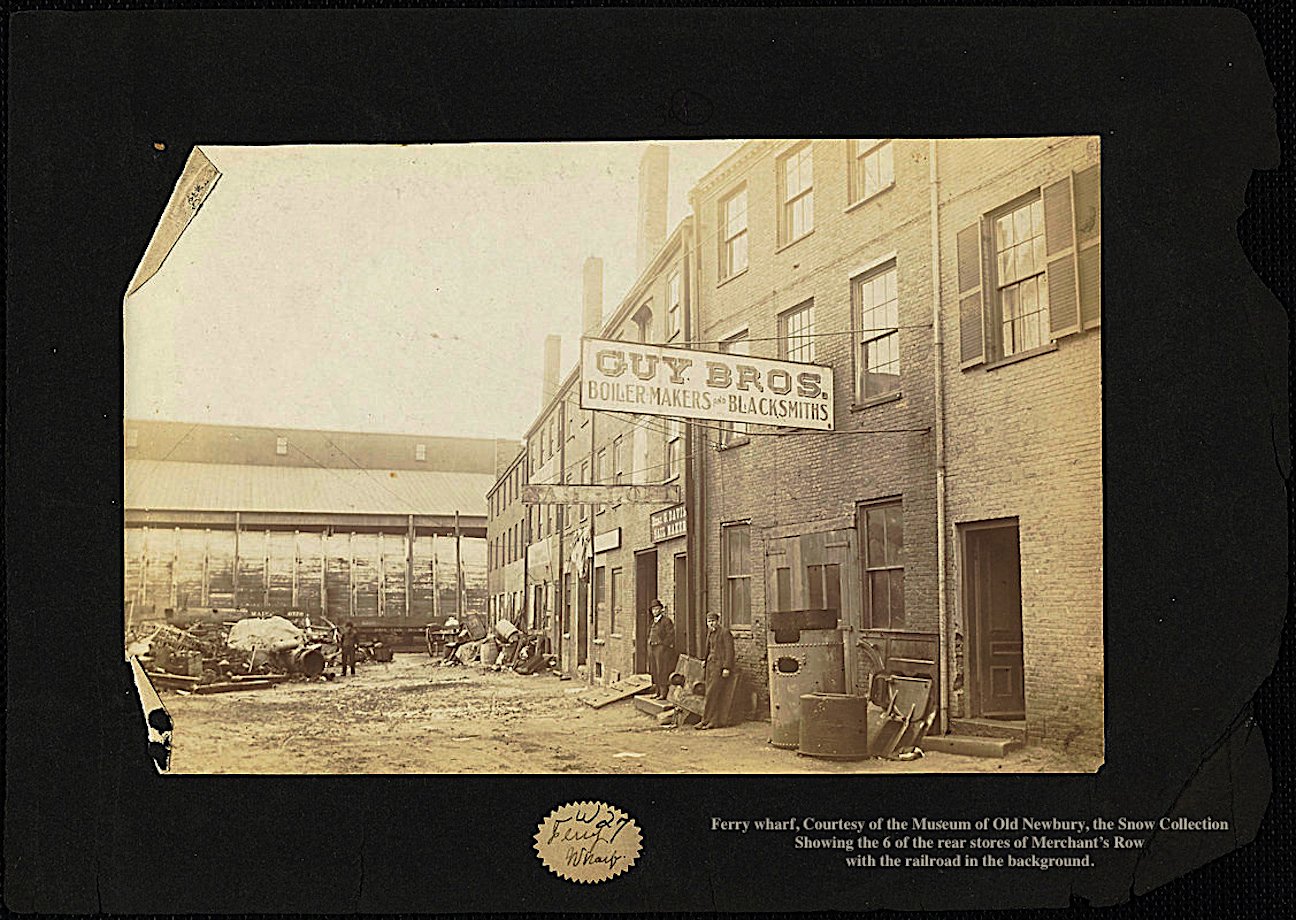 Ferry wharf, Courtesy of the Museum of Old Newbury, the Snow Collection
Showing the 6 rear stores with the railroad and the coal pocket (coal storage) in the background.

The Ferry Wharf building is a three-story hip-roofed building, with three stores and a rounded corner in the front. It is at the edge of Market Square on Water Street going towards Plum Island (see the maps and photographs for clarification). Sometime between 1812 -1820 a continuous line of eight stores was extended from the back of the Ferry Wharf Building to the end Ferry Wharf and was called Merchant’s Row. All but one of those stores in back exist today, the rest have all been demolished. 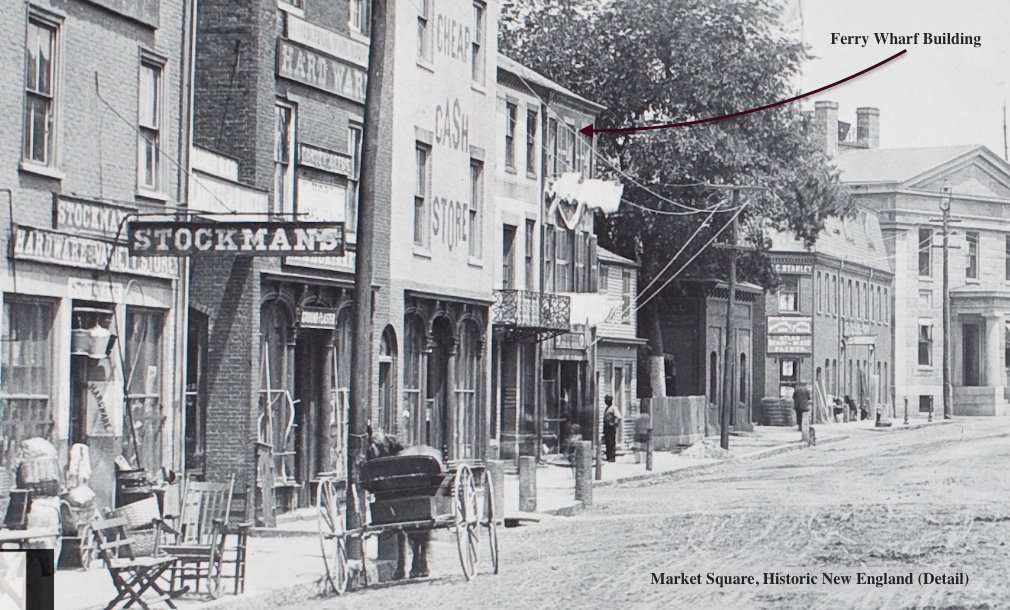 In colonial times, because of the ferry, which was an important colonial thoroughfare, Ferry Wharf along with Market Square and the other wharfs along the Central Waterfront, were places of active trade. Newburyport had a large shipbuilding industry and once the hull of a sailing vessel was completed at one of the shipyards upriver (please see the shipyards along Merrimac Street on the Interactive History Map and on the this website), it was launched and towed to a rigger’s wharf to be fitted out – often Ferry Wharf. The wharves, were primarily devoted to commercial activity, not only riggings for the ships, but other goods as well. In the early days, shipbuilding and merchant families were often intermarried. One of the Woodbridge daughters, Sarah Woodbridge, from the family who owned Ferry Wharf, married Stephen Hooper in 1764 (please see Stephen Hooper on the Interactive Map and on this website, use the search function) one of sons of “King” Robert Hooper of Marblehead. Ferry Wharf came under the control of one of the leading Colonial merchants dynasties. By 1805 the ownership of the wharf was broken up. 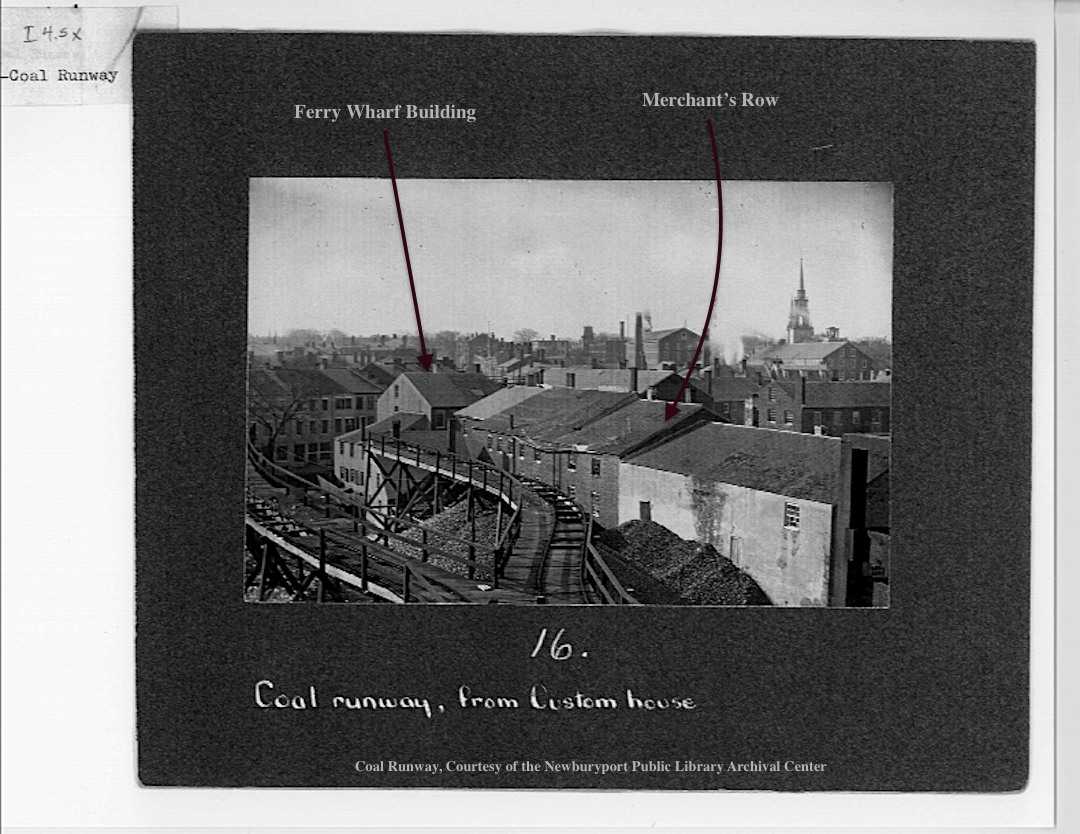 The Coal Runway, showing the back of Merchant’s Row and the Ferry Wharf building, the Unitarian Church is in the background, courtesy of the Newburyport Public Library Archival Center.

During the Great Fire of 1811 the Ferry Wharf Building and Merchant’s Row were extensively damaged, but not destroyed. The rebuilding of Market Square and Merchant’s Row and the Ferry Wharf building happened very quickly and commerce was restored. However, after the War of 1812 the economy drifted for nearly 25 years. And then at the middle of the 1800s the Industrial Revolution completely remolding Newburyport’s economy – the mills and the factories (many of which are on the Interactive History Map), the cotton mills, boot and shoe making, silversmithing, comb making, and hat making became part of the economy. 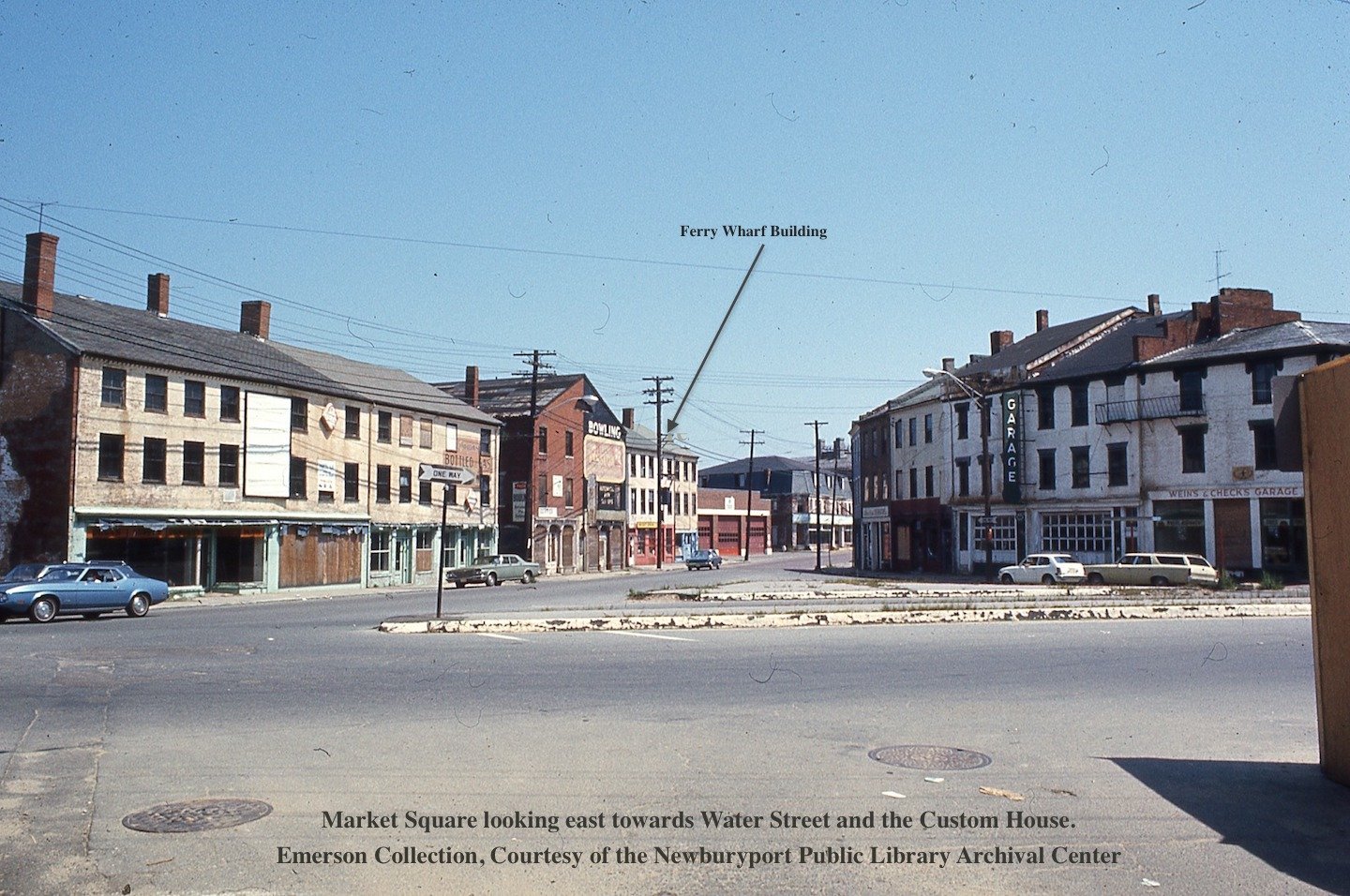 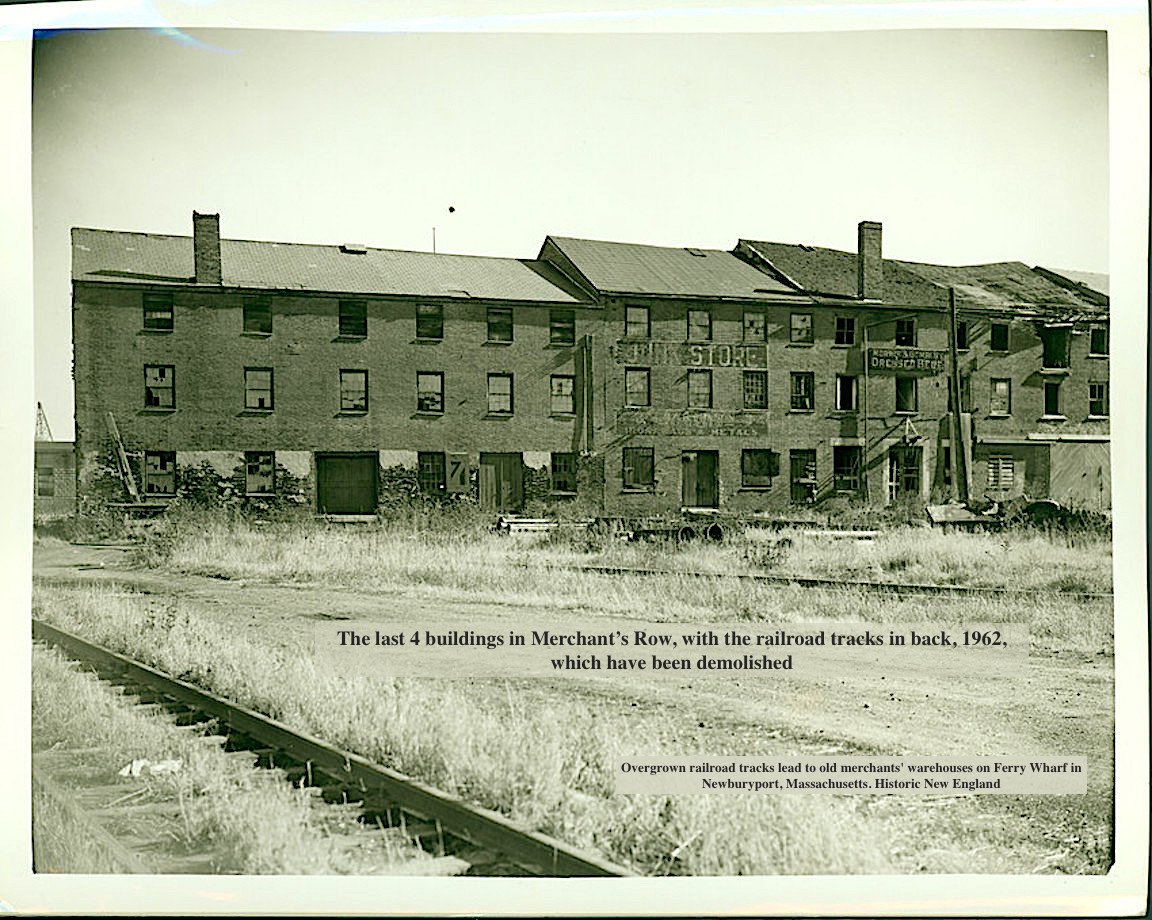 Overgrown railroad tracks lead to old merchants’ warehouses on Ferry Wharf in Newburyport, Massachusetts, from Historic New England, showing four of the rear buildings of Merchant’s Row near the railroad tracks, before they were demolished during Urban Renewal.

The shipbuilding industry had faded for about 60 years after the American Revolution, but in the 1840’s it revived. The rapid expansion of the local textile industry, with its need for fuel and raw materials, encouraged the construction of more and larger vessels, along with the discovery of gold in California, as easterners caught the gold rush fever and ships were needed to take people and supplies to the West Coast. It continued as one of the city’s principal industries through the 1870s, but it suffered from a series of recessions. Merrimac shipbuilders found it increasingly more difficult to obtain financial backing (please see Henry Moulton and Moultonville on the Interactive Map and on the Blog for more about the recession in the 1870s, use the search function). In 1901, the last Newburyport-built schooner, the Adelaide Barbour, was launched, marking the end of one of Newburyport’s earliest industries. 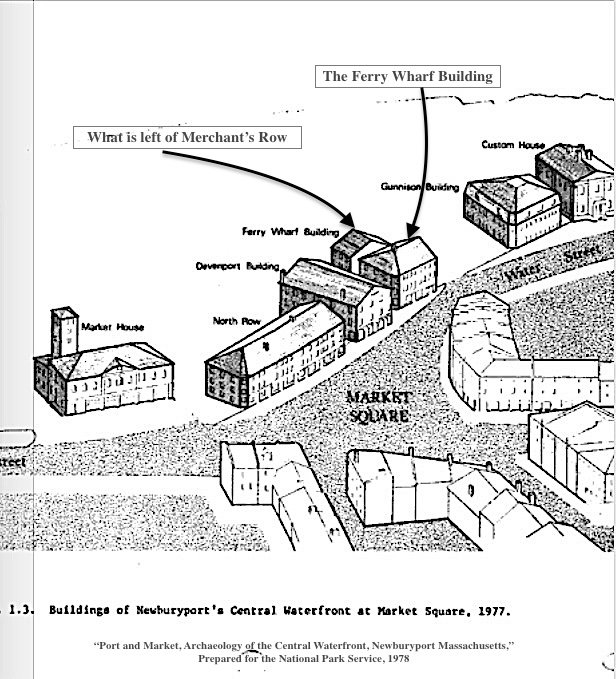 Central Waterfront Map, 1977, “Port and Market, Archaeology of the Central Waterfront, Newburyport Massachusetts,” Prepared for the National Park Service, 1978, showing the Ferry Wharf building and what is left of Merchant’s Row. 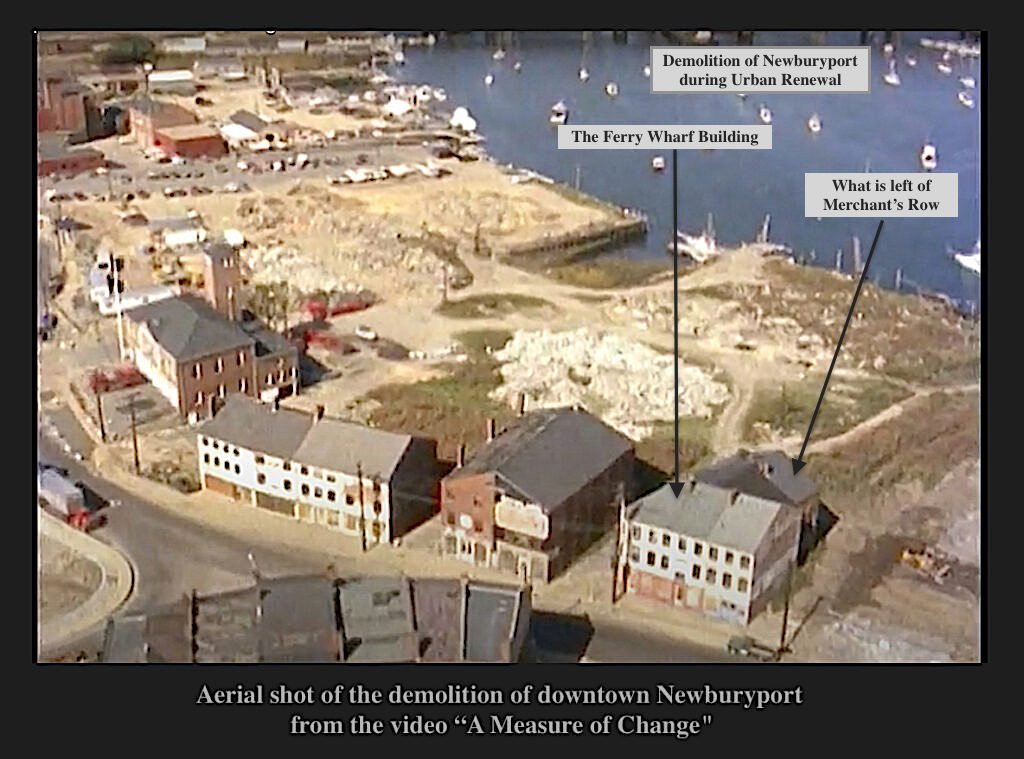 Aerial view of the demolition of downtown Newburyport during Urban Renewal from the video “A Measure of Change,” showing what was left of Merchant’s Row and the Ferry Wharf building.

The waterfront was completely changed by the construction of the Newburyport City Railroad, which was built in 1872 to transport coal and freight. It was during this time that the area between the wharves was filled in. In 1876 the Philadelphia and Reading Coal and Iron Company built a huge coal pocket for storing and distributing coal, which stood over five stories high and towered over every other building on the waterfront (it was eventually taken down in 1932). Market Square’s connection with the Merrimac River was completely cut off (Please see the 1900 Waterfront map for clarification). 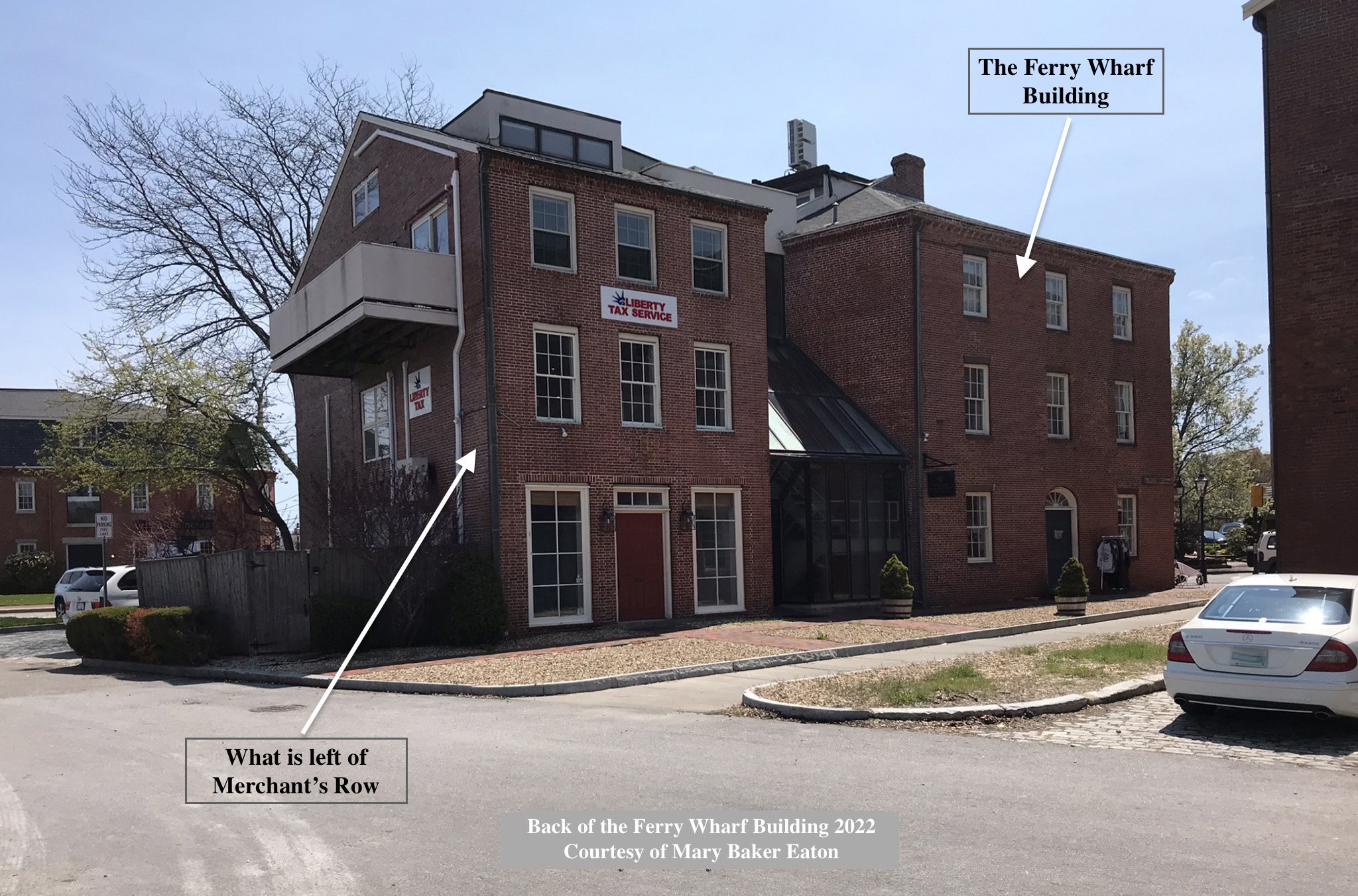 The back of the Ferry Wharf building, 2022 showing what is left of Merchant’s Row, courtesy of Mary Baker Eaton.

The nature of the businesses on the waterfront changed. The Central Waterfront and Market Square gradually deteriorated. By 1900 “the wharves” became synonymous with “the wrong side of town.” The area was made up of junk dealers, coal pockets (coal storage), tenements, saloons, and dilapidated buildings, very different from the former hub of thriving commerce. The restoration of downtown Newburyport in the late 1960s and early 1970s gradually brought the waterfront back to economic well being. Before downtown was restored, Newburyport demolished a great deal of the buildings downtown and along the Central Waterfront. In hindsight, many of those buildings most probably would have been saved (Please see Urban Renewal on the Interactive Map and this website), including, possibly Merchants Row. 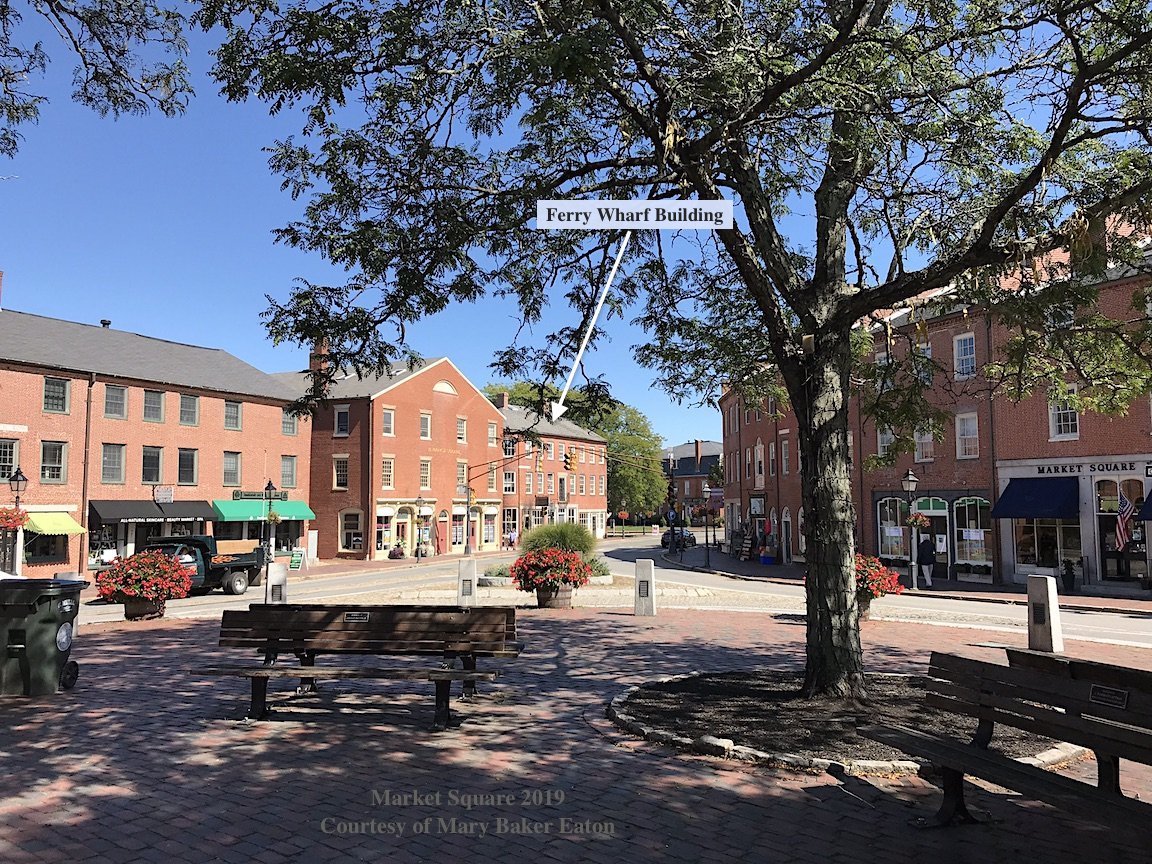 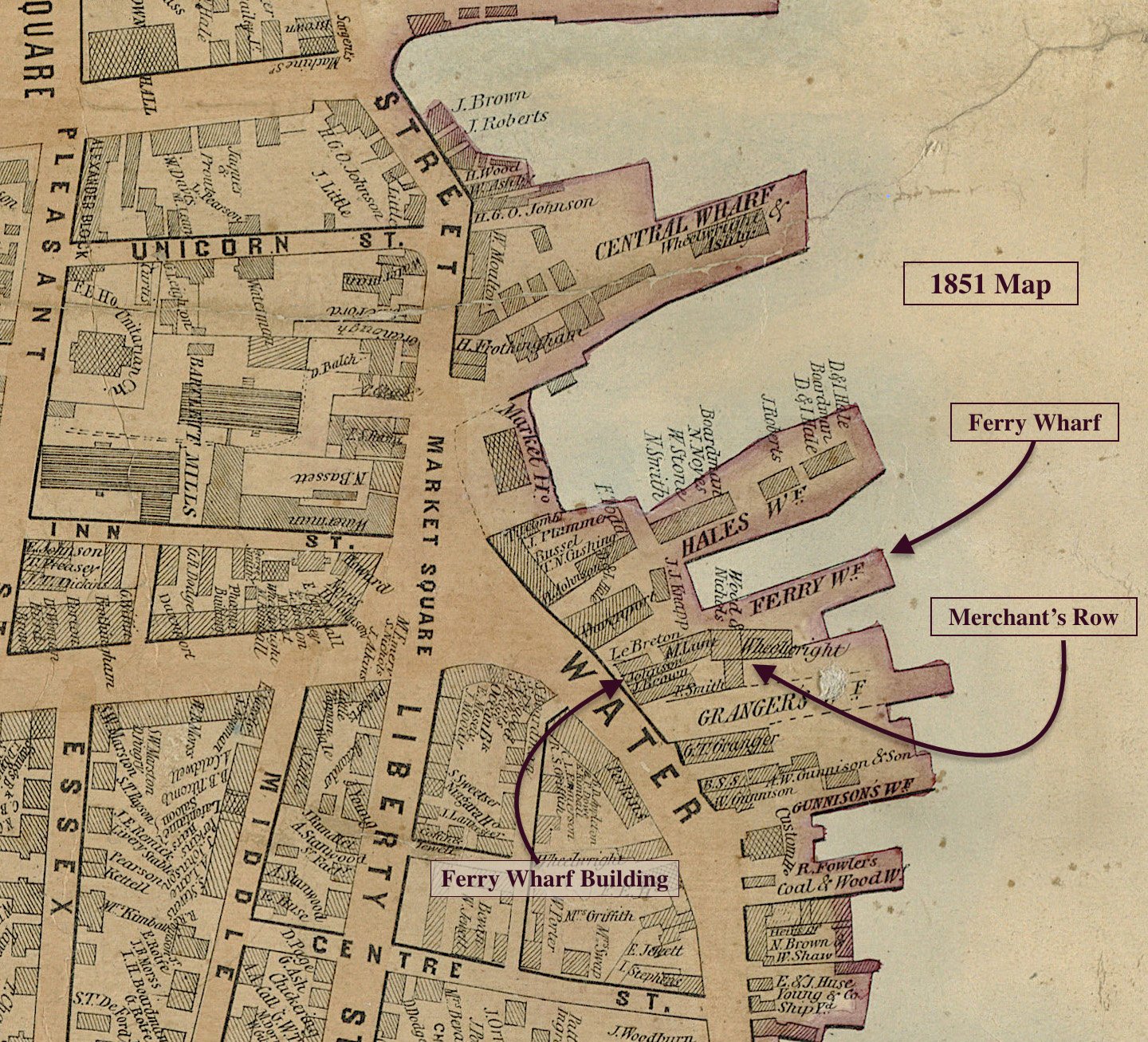 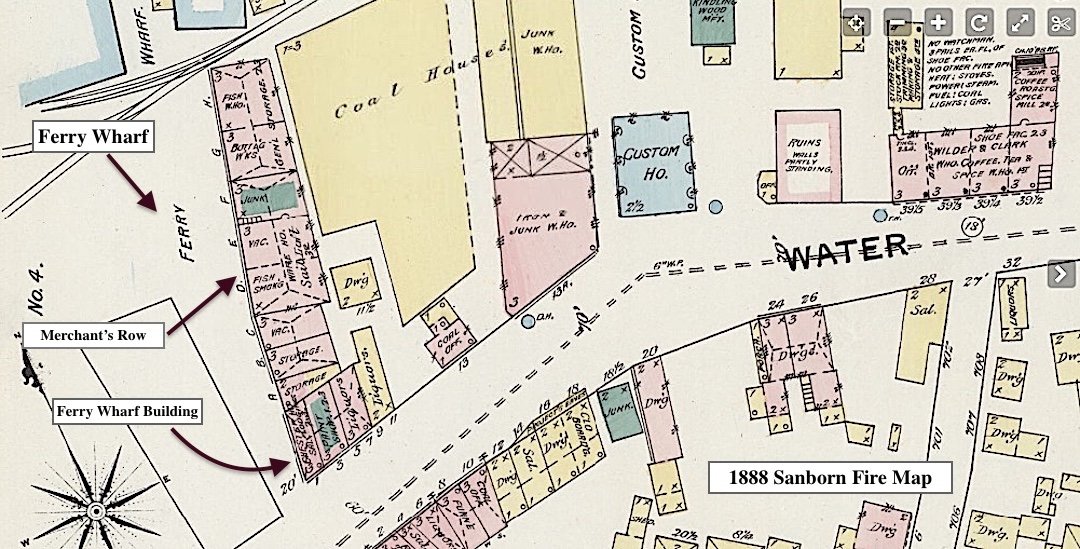 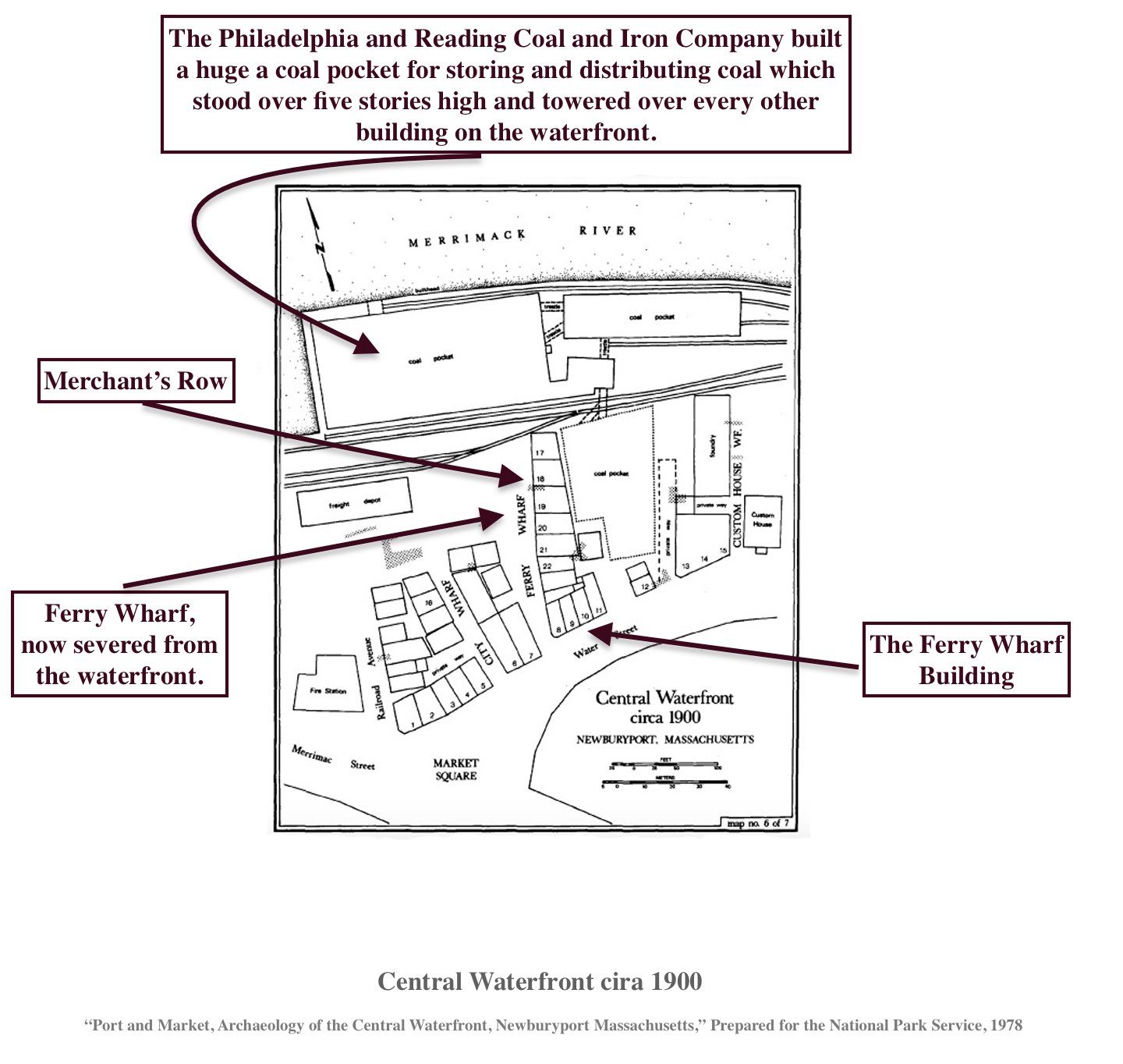 Central Waterfront Map, circa 1900, “Port and Market, Archaeology of the Central Waterfront, Newburyport Massachusetts,” Prepared for the National Park Service, 1978, showing how Ferry Wharf and Merchant’s Row are completely cut off from the waterfront.

The information was taken from “Port and Market, Archaeology of the Central Waterfront, Newburyport Massachusetts,” Prepared for the National Park Service, 1978 (a remarkable document).

And a huge “Thank you” to the Newburyport Public Library Archival Center for all their help and insights.