At the foot of Butler Street, now Merrimac Court, from 1831 to 1884 - one of many shipyards along the Merrimac River in the North End of Newburyport. 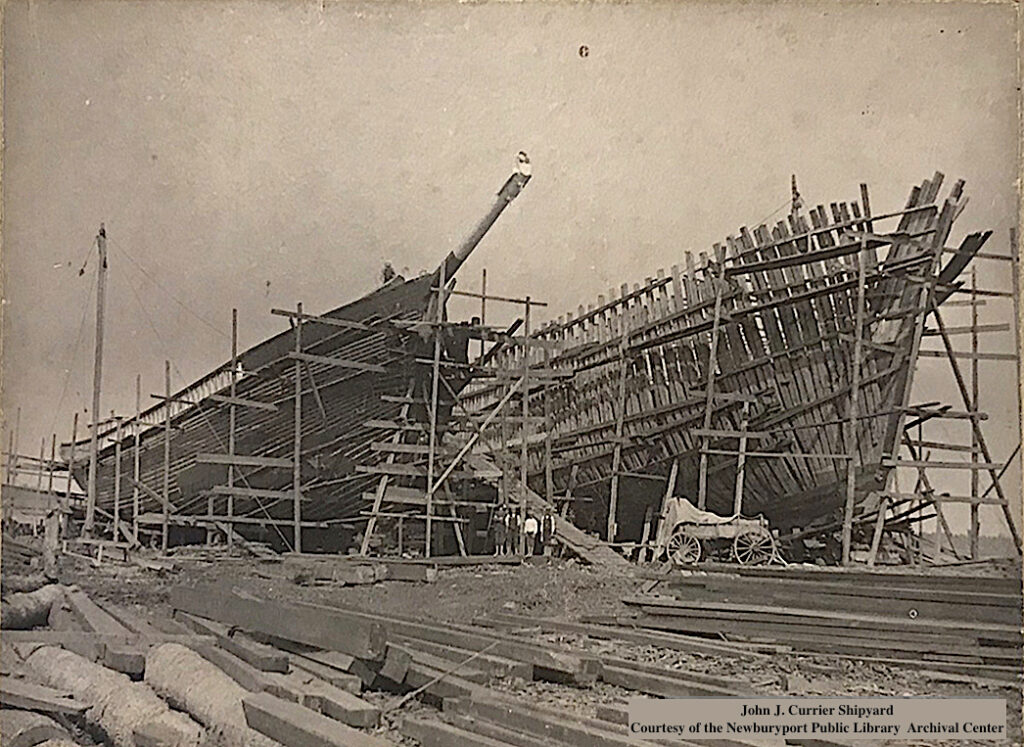 John J. Currier, Jr. owned a large tract of land at the foot of Butler Street and slightly east of Merrimac Court on Merrimac Street in the North End, where he built a large shipyard in 1831. Between 1831 and 1884.  Currier built ninety-seven ships and barks and one schooner, one steamer, and one scow of 200 tons, total tonnage 80,869.**

The shipyard contained two launching ways, a sawmill, large buildings including a two-story workshop, where workers drew or made templates of new ships that would be built and a blacksmith shop. There was also a wharf long enough to tie up two vessels and it was located next to one of the launching ways. There was a large area of water that was enclosed by a fence that was a holding pen to store timber for the ships. The timber came down river and was brought in by an oxen team. In later years timber was transported by coasting schooners and railroad cars.* 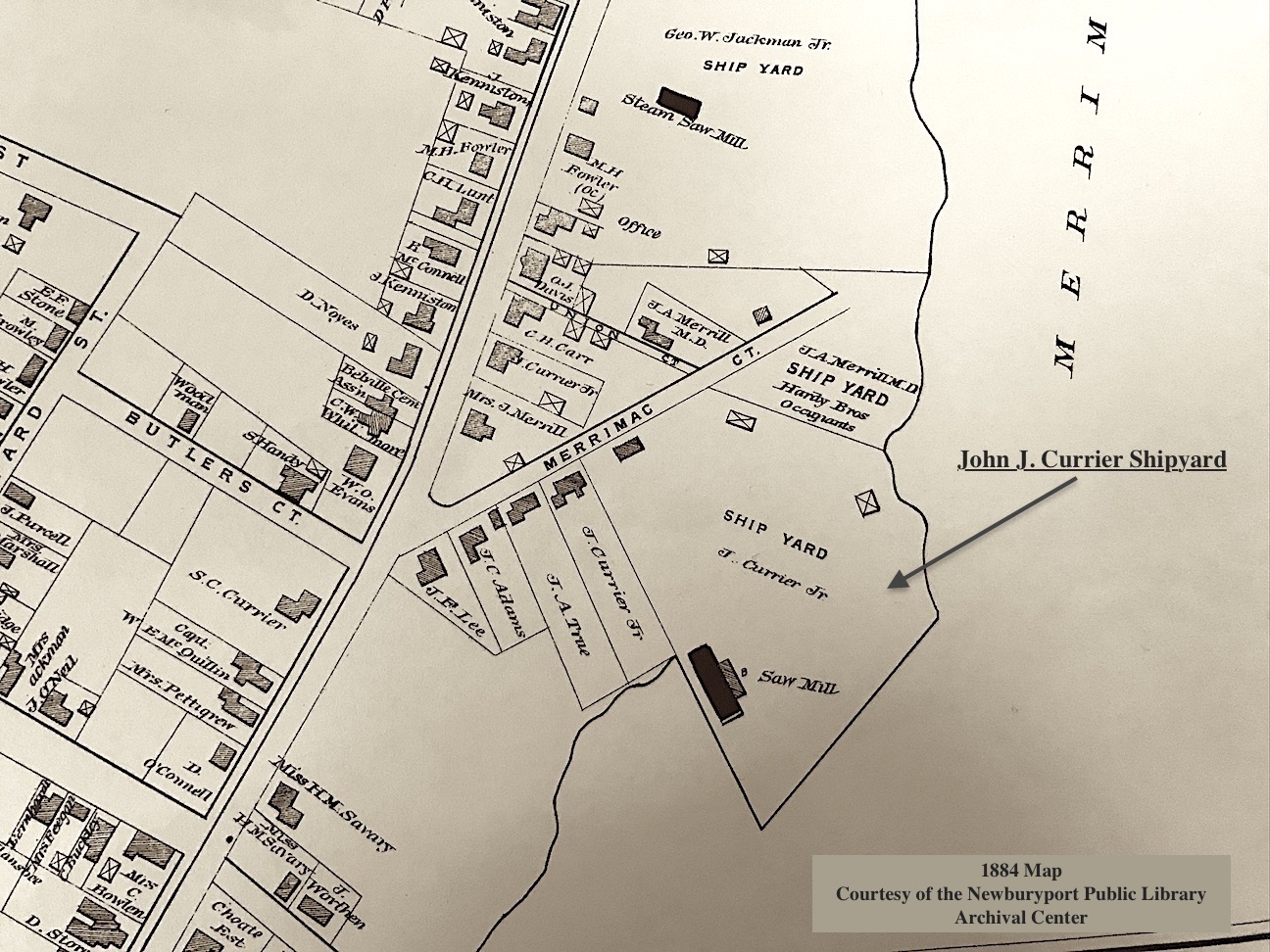 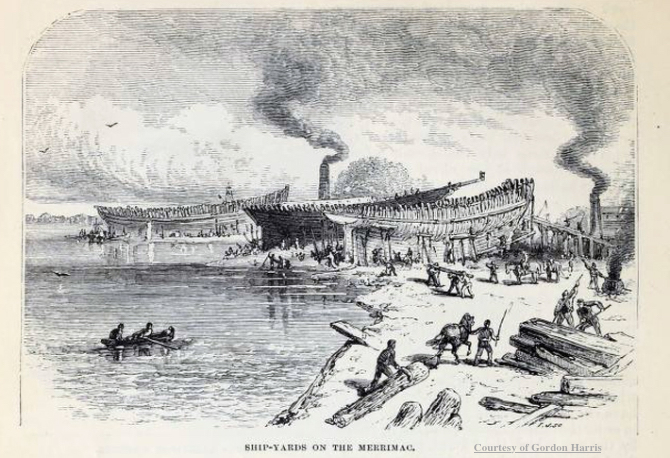 Ship-Yards on the Merrimac, courtesy of Gordon Harris 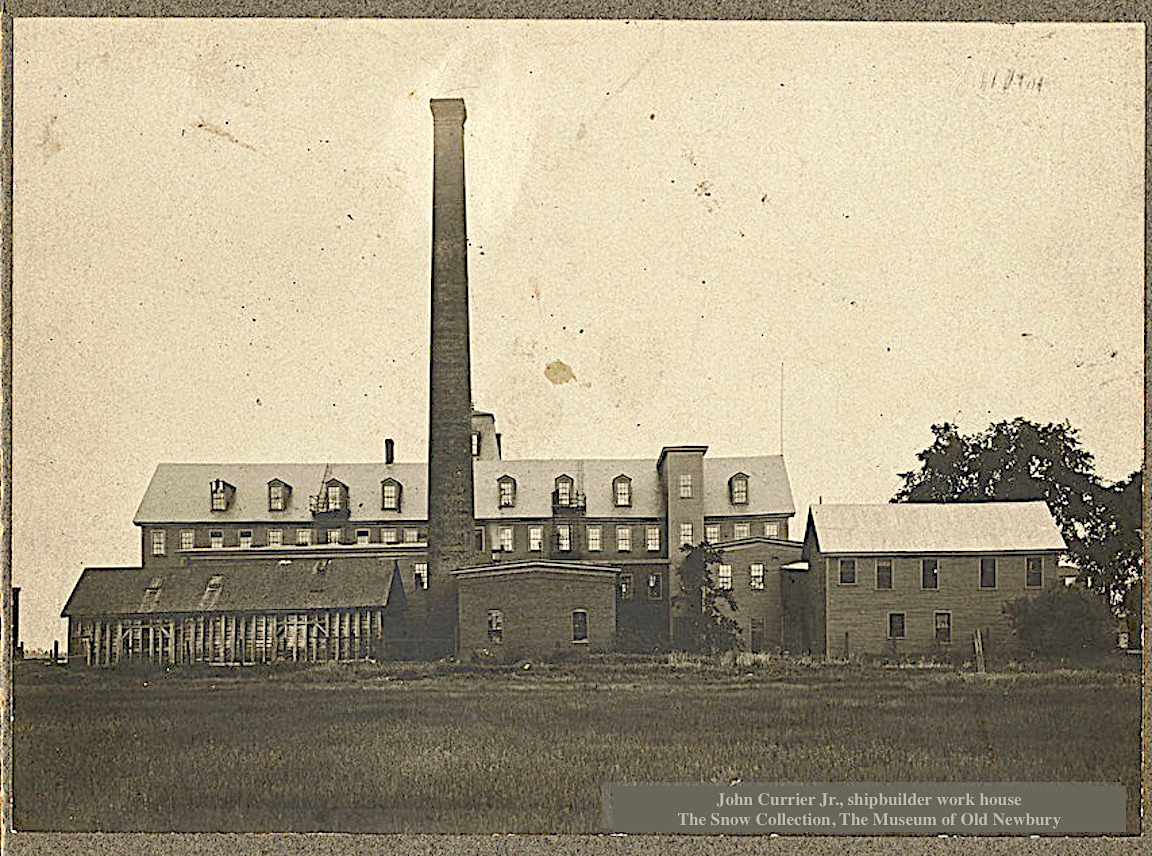 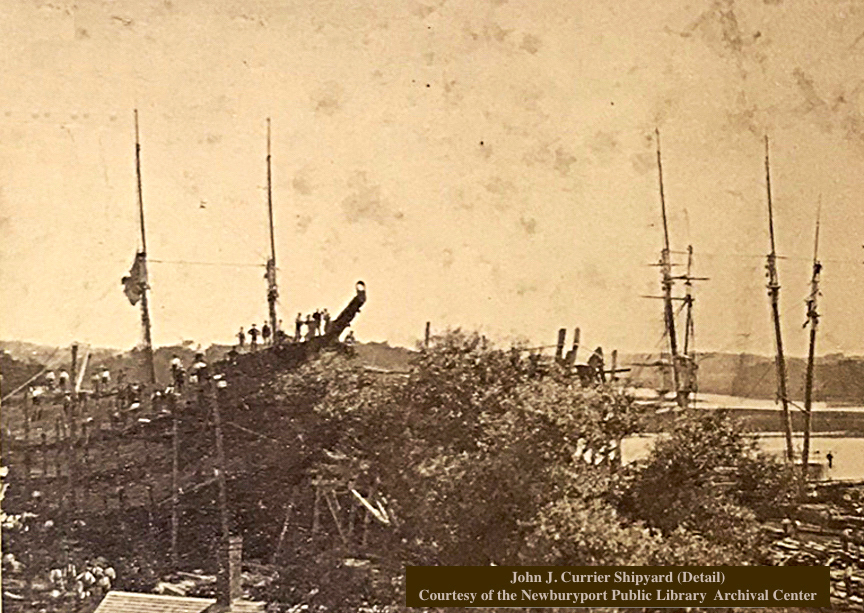 The demand for larger and faster vessels grew, especially after the discovery of gold in California in 1849. Mr. Curriers vessels continued to sell as quickly as they were built, increasing in speed but not sacrificing their seaworthiness or carrying capacity. John Currier had the reputation as a builder of some of the finest sailing vessels in America and England. The Boston Traveler, on August 8, 1860, stated, “Among shipbuilders, John Currier, Jr., of Newburyport stands conspicuous. His reputation both at home and in Europe as a capable shipbuilder and as an honest man is without rival. In London and Liverpool, the examining committee is perfectly satisfied as soon as they learn the name of the builder of any ship built by him.”*

Many Newburyport ships were bought by the British. Mr. Currier’s ships included the John Currier, which was built in 1882 and was the largest sailing ship built on the Merrimac River.*  The Mary L. Cushing,  built in 1883 was the last square-rigged sailing vessel to be built in Massachusetts. John J. Currier retired in 1884 and died in 1887.^* 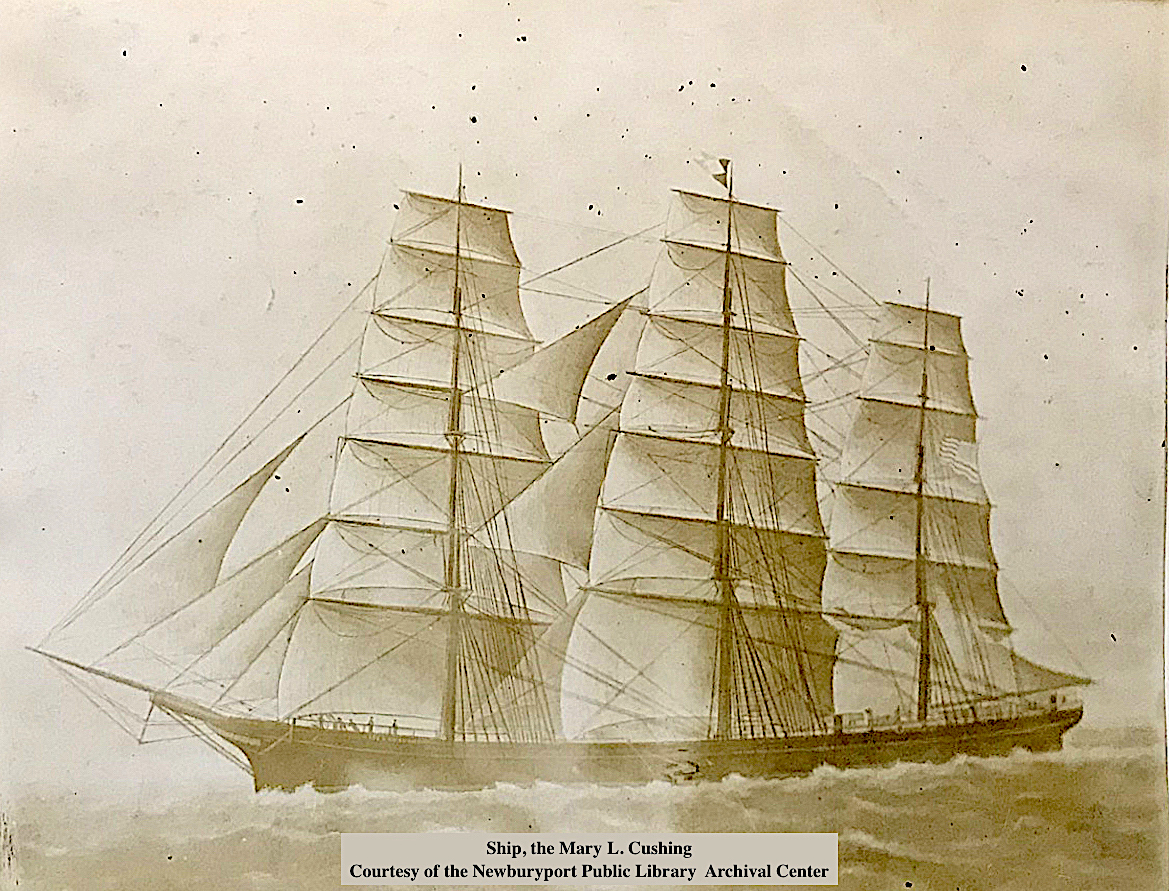 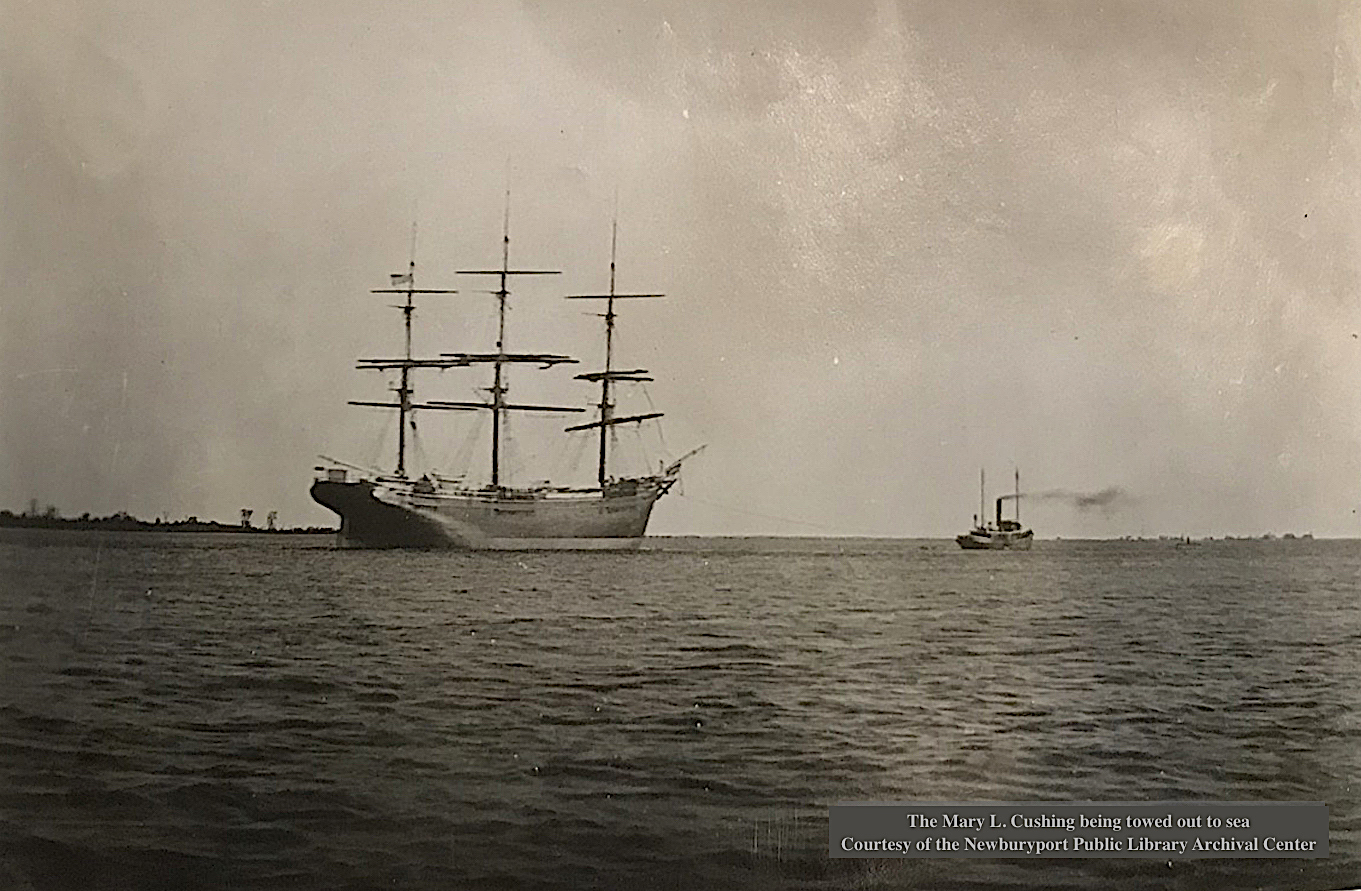 The Mary L. Cushing being towed out to sea, courtesy of the Newburyport Public Library Archival Center 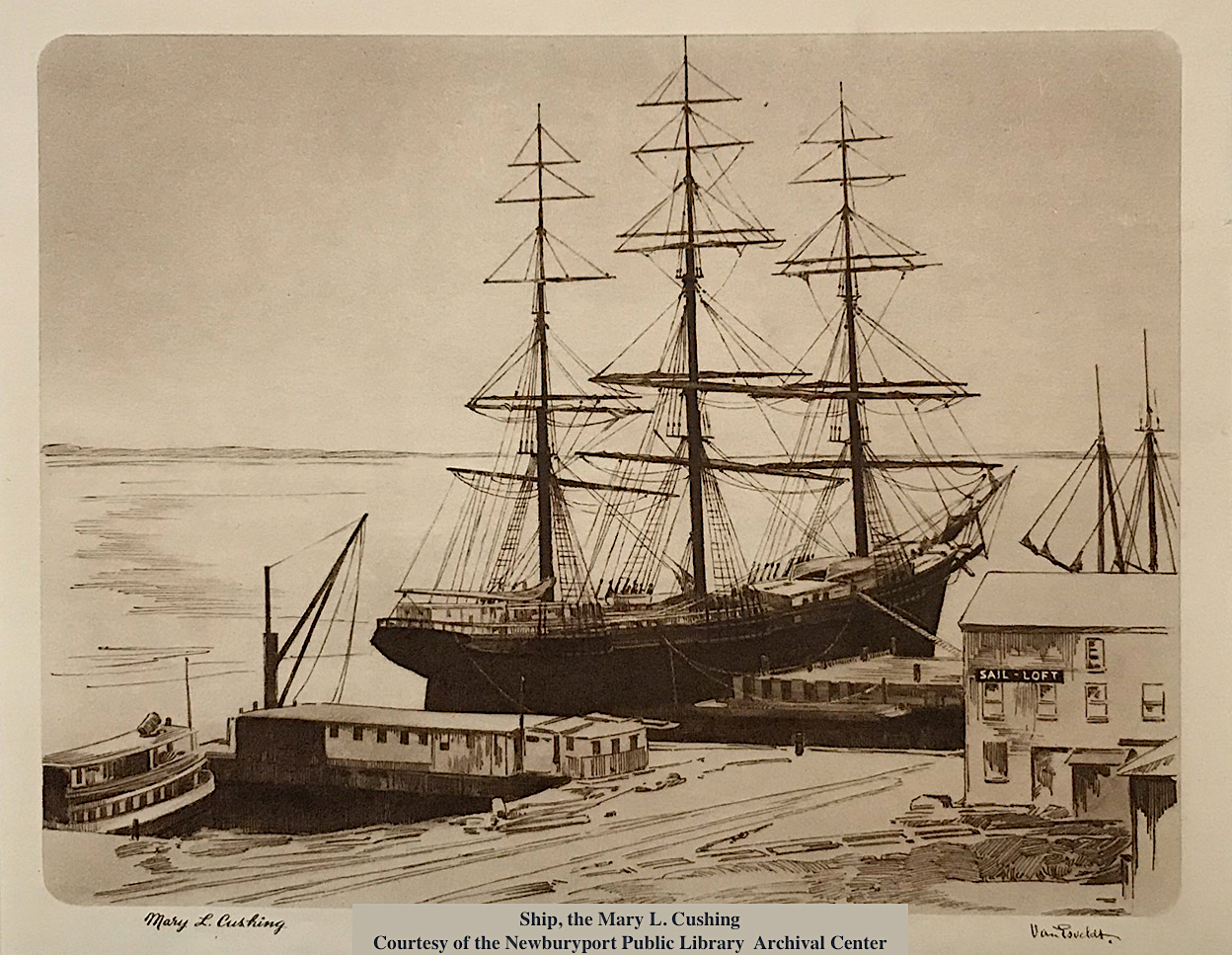 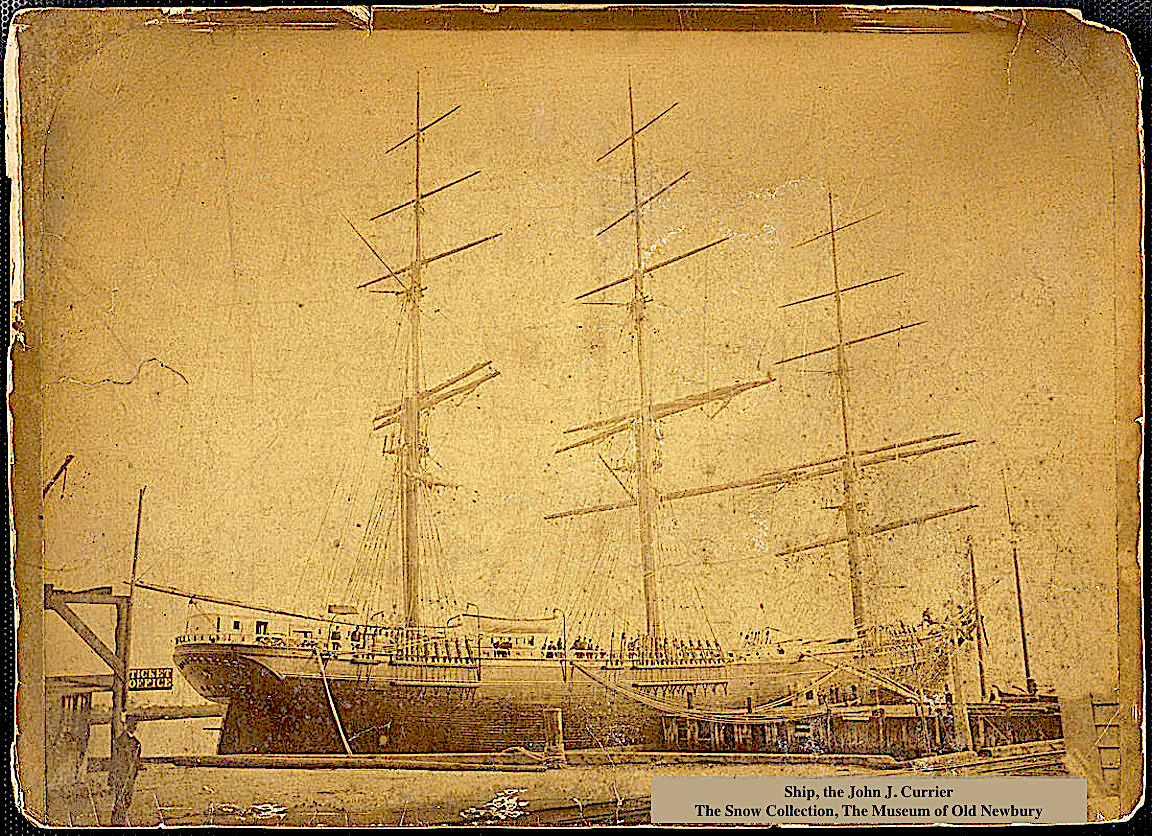 Ship, the John J. Currier, The Snow Collection, The Museum of Old Newbury

John J. Currier’s son was the author and historian John J. Currier. He worked for many years in the counting room of the Currier shipyard. When the shipyard closed, John J. Currier began the first of many years of research on local history in his old office. His work is compiled into four volumes that continue to be an invaluable resource for history researchers* and which the interactive history/story map uses a lot. 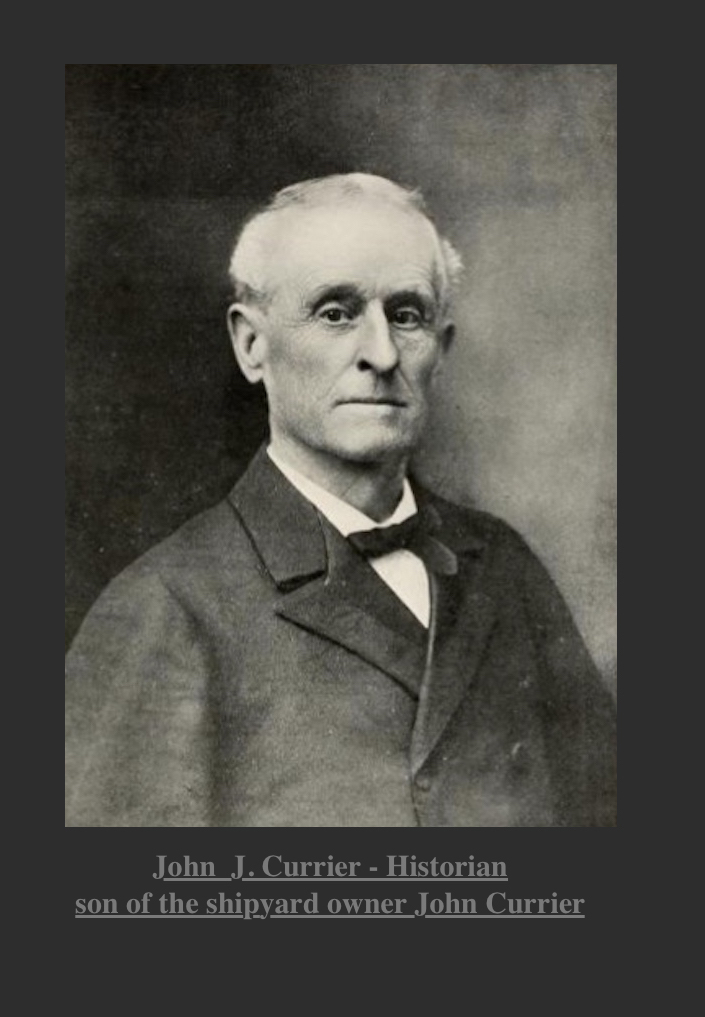