There was once a whole variety of neighborhood stores throughout Newburyport’s historic district which created a wonderful sense of community within the different neighborhoods. 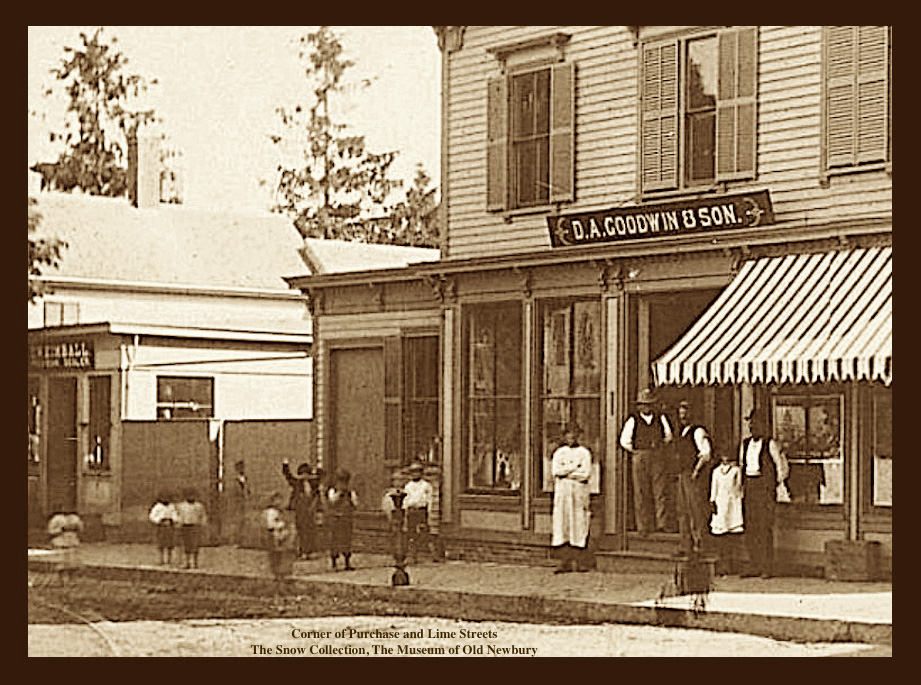 There once were a whole range of neighborhood stores throughout Newburyport, separate from the ones that existed downtown and along the wharfs. On Purchase Street in the South End of Newburyport for example, there was a liquor store, a drug store, a beauty shop, a cleaners, a barber, a bakery and a number of grocery stores, including a First National and the A & P, variety and notion stores. It wasn’t just Purchase Street, at one time it was that way throughout Newburyport’s historic district, in the South End and in the North End of the city. They created a wonderful sense of community within the different neighborhoods. This is a sample of some of the stores that existed, the ones that I have photographs for, but there were many more.

Two stores on the corner of Purchase and Lime Streets 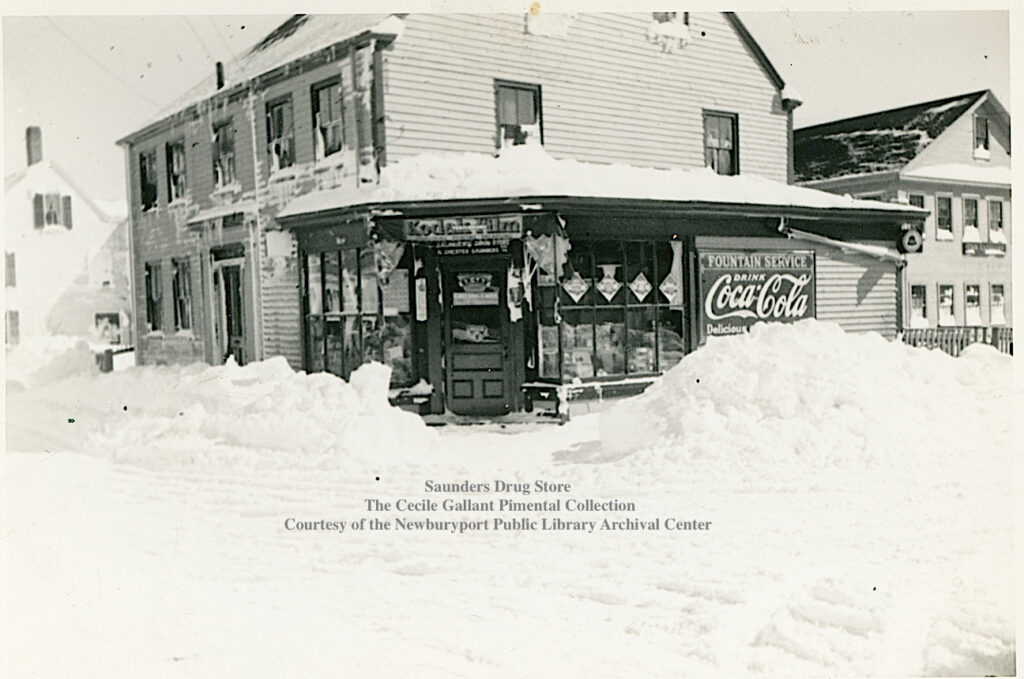 “Saunders’ Drug Store was at the corner of Lime and Purchase streets . Mr. H. Chester Saunders was the owner of the store. He was assisted in the business by his daughter, Priscilla, also a pharmacist. Following her father’s death, Priscilla ran the business for many years. It was a very convenient and popular stop for the residents of the south end of the city. Cecile Pimental, Mr. Saunders’ granddaughter, who also worked there for many years, tells me that he always made it a practice to hire neighborhood people to work in the busy store.”** 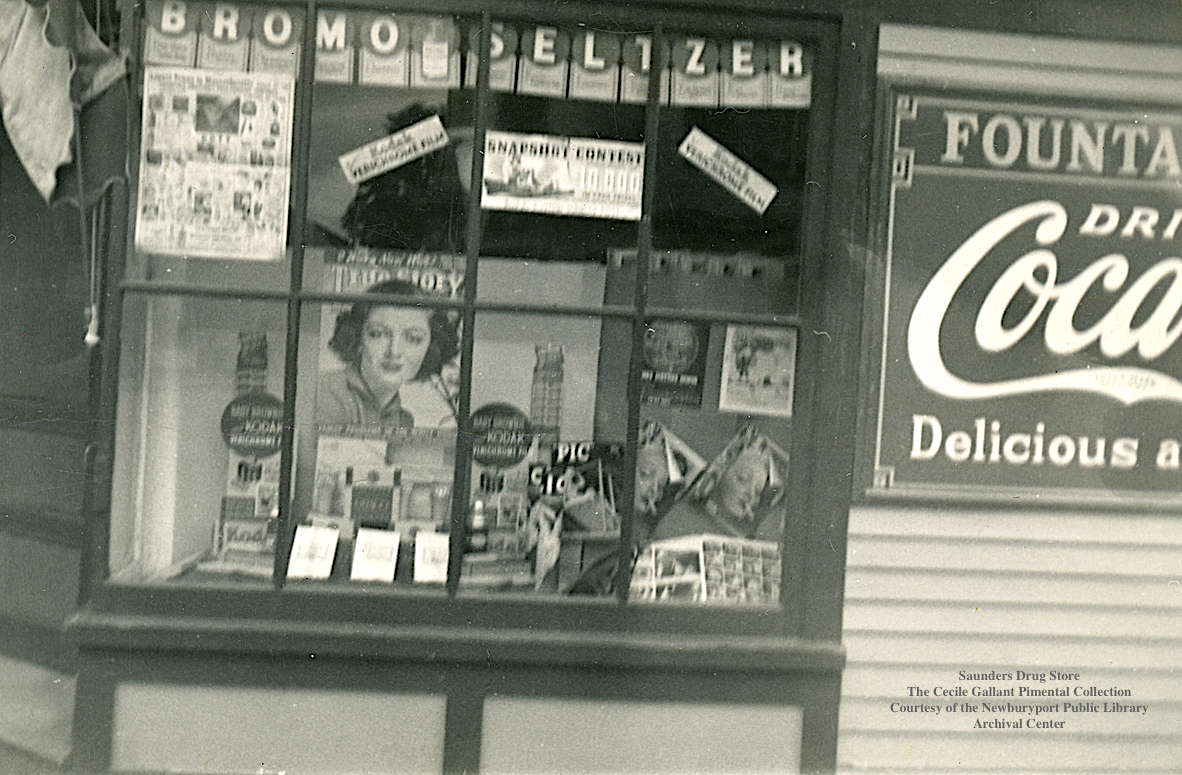 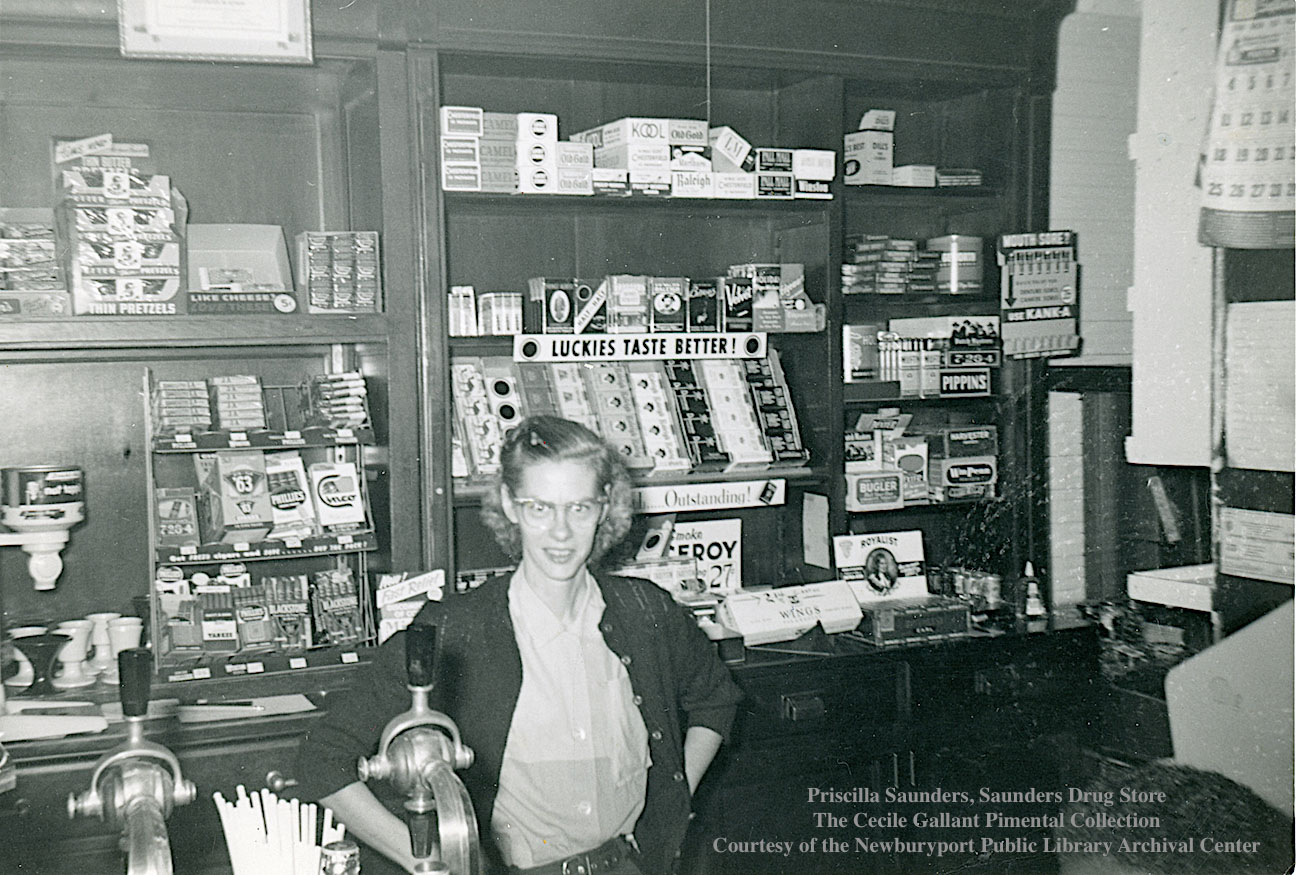 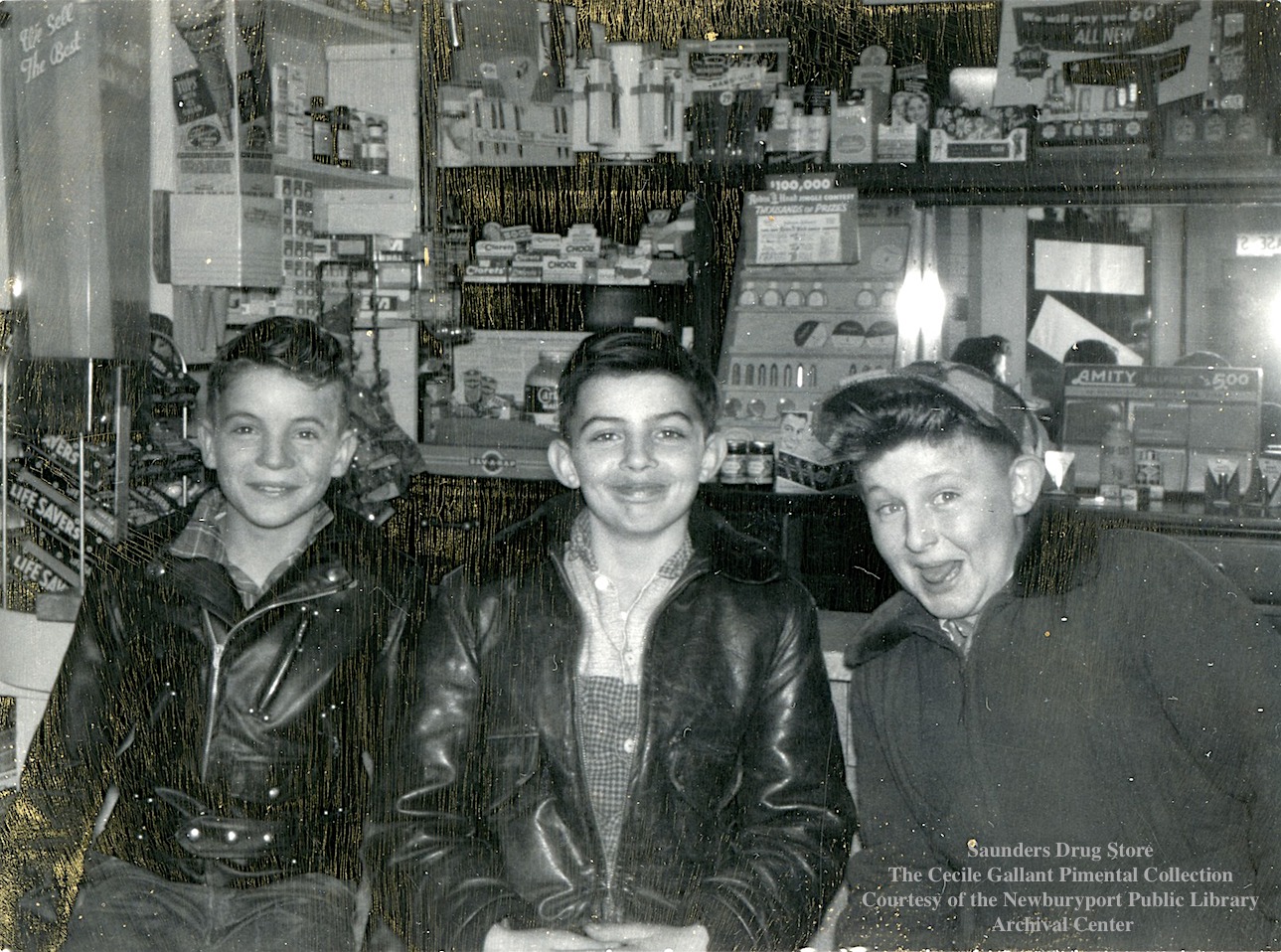 The neighborhood children had lots of memories of what it was like, these memories are from the Facebook group, Newburyport History Buffs.

“This was a very busy corner in the 50s and 60s when it was Saunders drug store. People always coming and going and kids hanging around out front.  Where else could you go in the South End and get a hot fudge sundae and then go out back and look at tropical fish, comic books.”

“Double Cone 10¢.  My mother would give us change to get ours and bring back her favorite pudding ice cream in a cup. Waiting for your medicine while enjoying an ice cream float, comic books out back…so many great memories of those sisters who put up with us kids!”

“I  remember the little things like the matchbox display in the front window and the sports cards on the right side as you walked in, and the cokes in the paper cups at the soda fountain.” 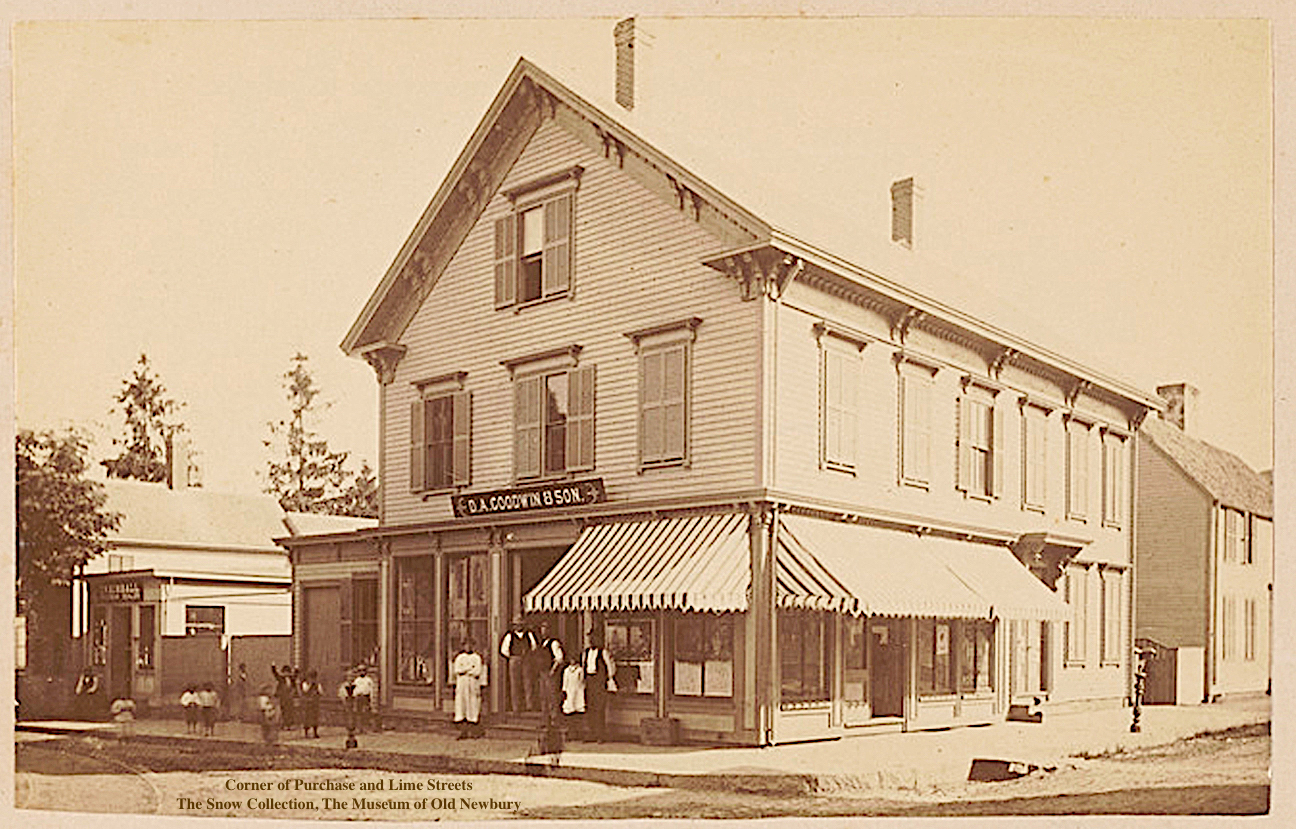 A Grocery Store and then a Package Store

The photograph from the Museum of Old Newbury, the Snow Collection, shows the grocery store of D. A. Goodwin & Sons. Daniel A. Goodwin ran Goodwin Groceries from 1864 to 1917 at the other corner of Purchase and Lime Street. Before that it was George Tilton Grocery Store. Daniel Goodwin sold the building to Arthur Rochette, who ran J.A. Rochette and Sons Grocery and Provision. Albert Rochette inherited the store from his father and created Rochette’s Package Store which sold in 1974.* 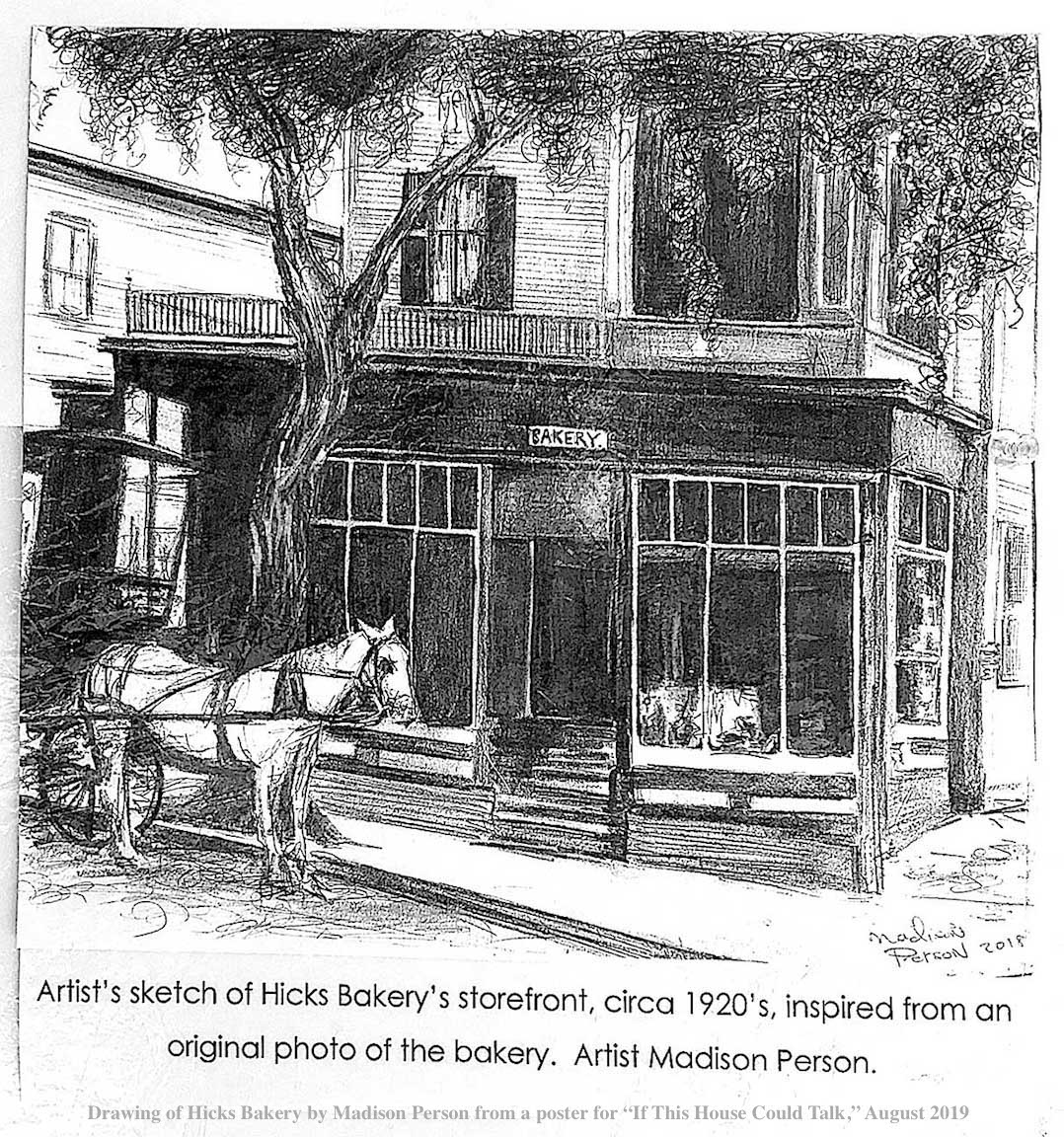 Drawing of Hicks Bakery by Madison Person from a poster for “If This House Could Talk,” August 2019

“Newburyport residents had long enjoyed the baked goods created at what is now 45 Purchase Street, first Tibbetts and then Hicks Bakery. William Hicks purchased the property/bakery from Hanna Tibetts, widow of Russel Tibetts in 1914. William Hicks retired in 1961. The bakery closed in 1962.

In the 1800s Hicks Bakery was famous for sending horse-drawn carriages out into the streets to deliver freshly baked bread. Supplies for their famous baked bread and goodies would arrive on trains and stop on the tracks outside the back door of the bakery off Harrison Street, now part of the South End Clipper City Rail Trail.”***

The neighborhood children had lots of memories of what it was like, these memories are from the Facebook group, Newburyport History Buffs.

“I grew up right next door and in the summer we’d wake up to the smells and sounds of people coming and going with their fresh donuts and would hear the constant squeak of the spring on the screen door as it would stretch and then the door would slam shut. It was a gentle wakeup call of another beautiful day in the sweetest little neighborhood called Joppa.”

“We walked past Hick’s Bakery every day to and from the French School. Sunday morning extra special treat was donuts after church. Their bread was like home made, but the most wonderful thing to me as a child, was the dessert Bird’s Nests.”

“Loved that bakery,  Mom would buy fresh bread, and while it was still warm we all got a piece with soft butter. Also the best bird’s nests!” 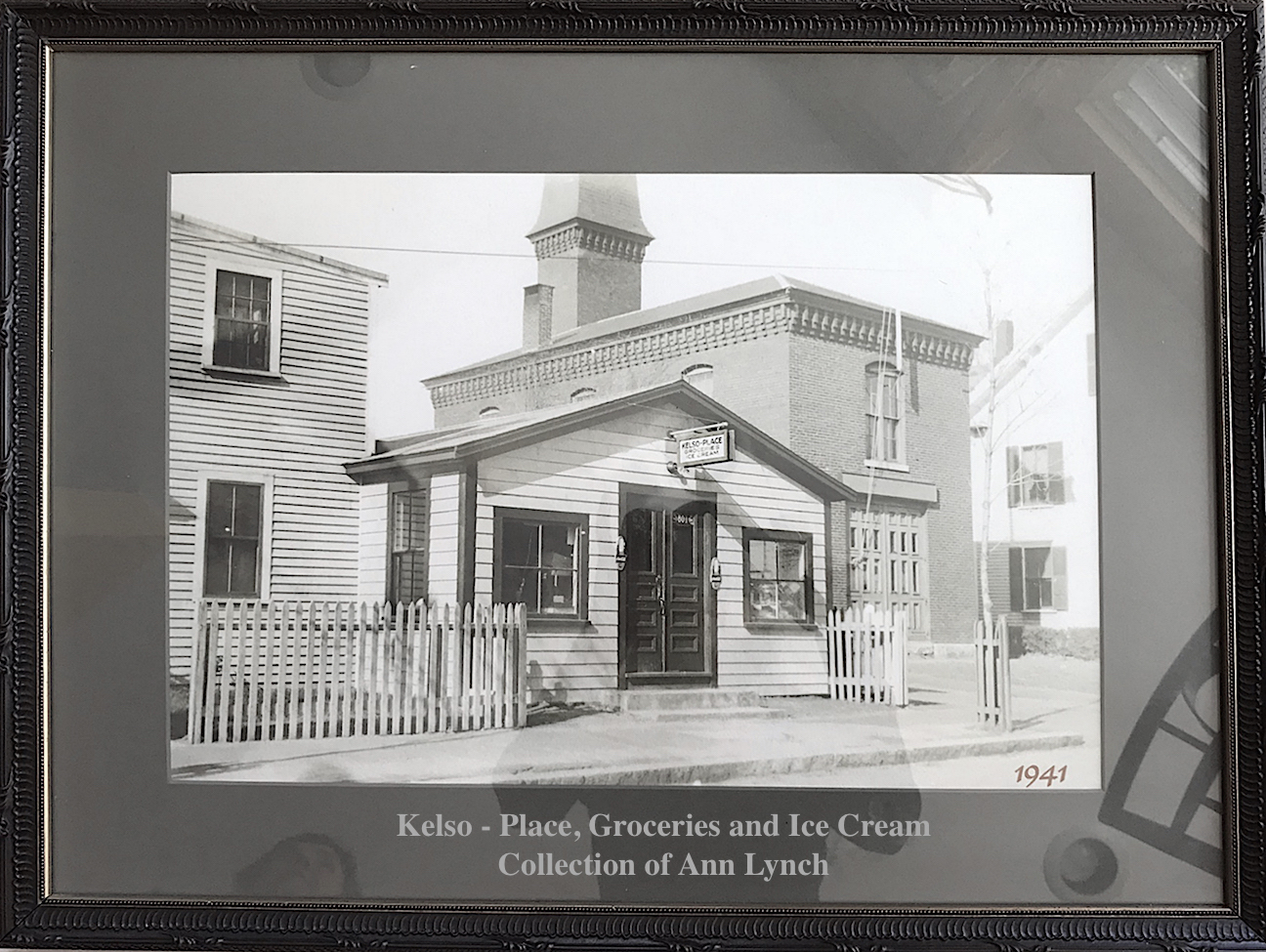 George and Hanna Kelso bought 80 Purchase Street in 1933, it was sold in 1977.^^*  The store sold groceries and ice cream.  In the photograph you can see Fire House No. 8 next door. The photograph is from the collection of Ann Lynch and was taken in 1941.

Here are a few of the memories of the neighborhood children from the Newburyport History Buffs.

“I remember this store very well. I lived on Pine, Lincoln, and Madison Streets. The store was on the way to Jackman (the Jackman School). I remember Thelma worked there. It was one of the smaller corner stores in the area. I always bought Cracker Jacks from them. My Mother  knew the owners and Thelma quite well. It didn’t have the grocery stock that Wells’ store on Marlboro had. Felt warm and close when you went in there with the counter to the left, I believe.”

“I used to walk to Kelso’s to get a quart of milk sometimes for my mother. I remember the counter and cash register on the left, and the penny candy. Thelma would often enter through a curtain at the back which led from the main house.”

“I never remember Mr Kelso only Mrs Kelso, she had a large selection of penny candy!”

“I remember as a youngster it was Kelsos.  Had large wooden pickle barrel as you walked in door.” 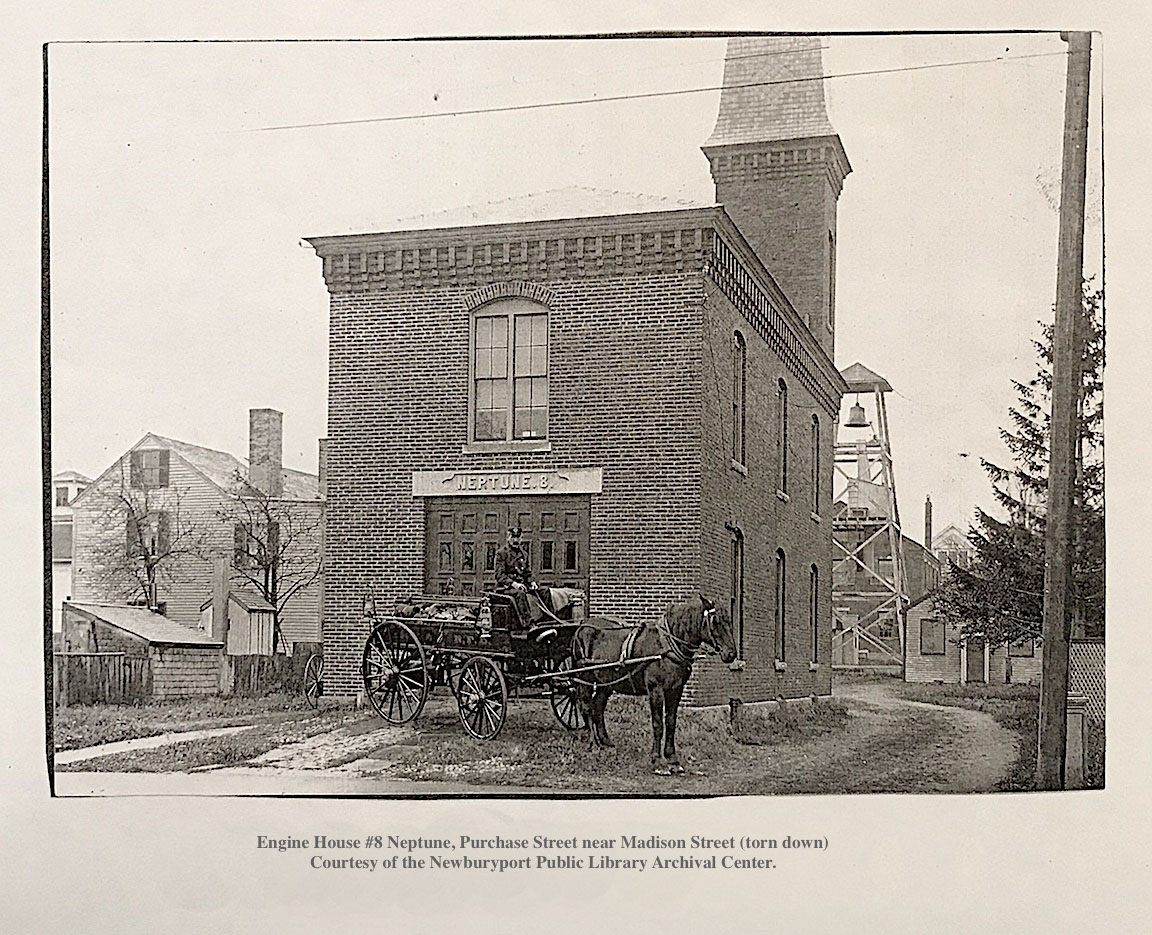 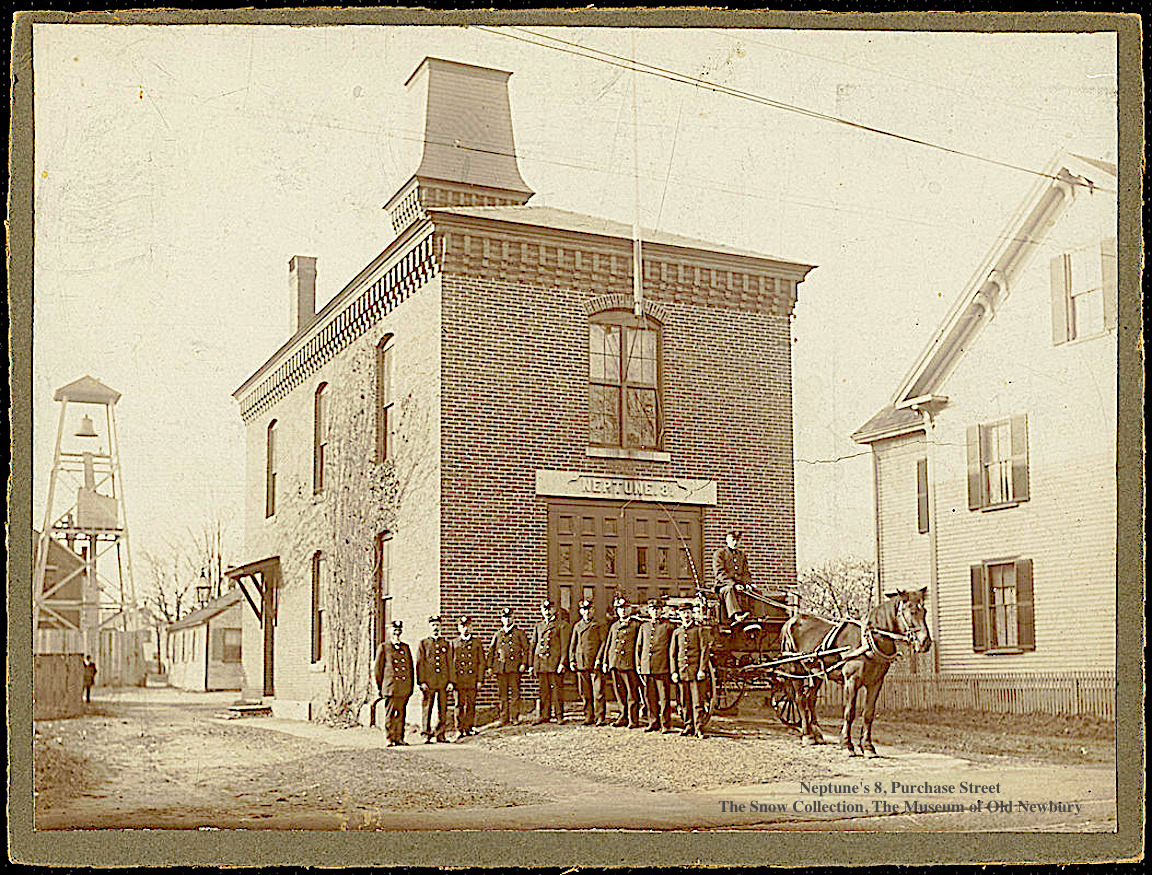 Engine House #8 was right next to Kelso and can be seen in the photograph, and although it is not a neighborhood store, I thought I would include it in this page to give a sense of what the neighborhood was like.

The Neptune Engine House No.8 was built 1878 for the new engine from L. Button Company Waterford, New York. The new building replaced a wooden fire house moved to this spot in 1856 from Water Street, which was destroyed by fire along with its engine, due to a defective stove on November 9, 1877.  In 1885 the company went into reserve and hose company No. 8 took its place due to steamer engines. Around early 1930’s the hose company disbanded and building was used for different uses until 1966 when it was torn down. Its lintel stone over the door sits outside the Neptune building on Hancock Street and the 1878 Neptune 8 is there used for Firemen’s musters now.^* 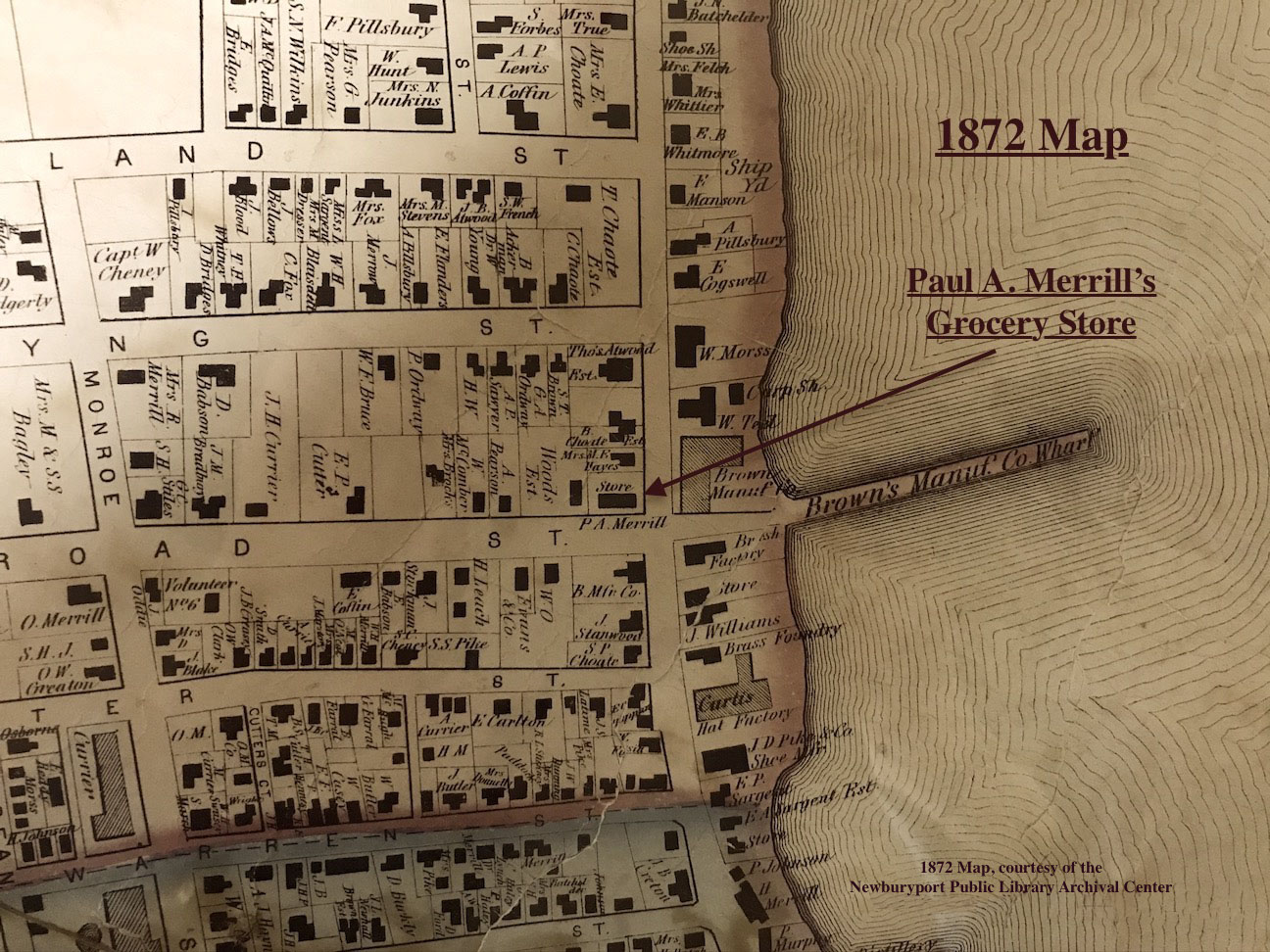 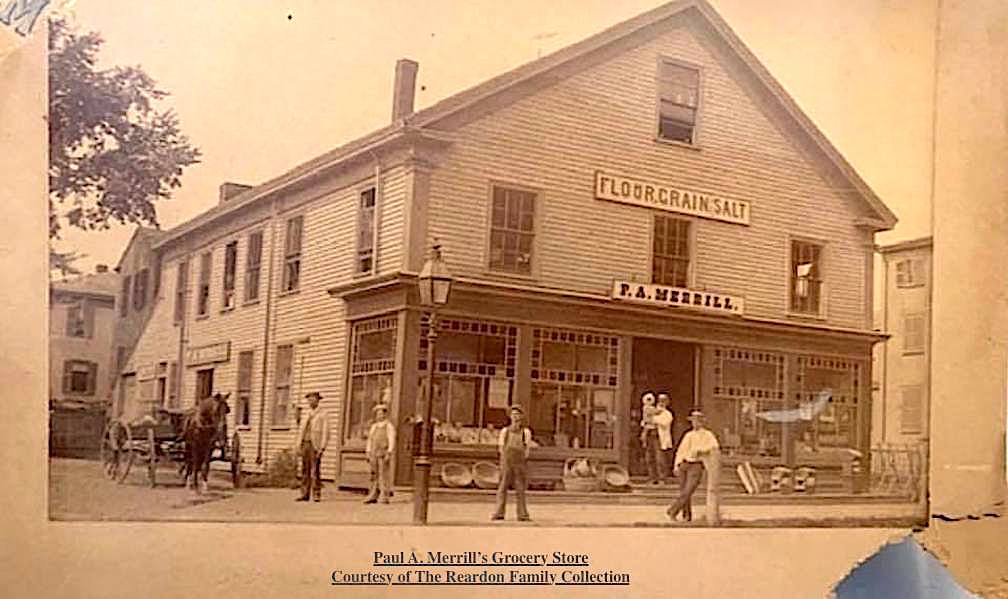 In 1851 Enoch M. Read bought land at the corner of Merrimac and Broad Streets and built a grocery store.  In 1866 it became Read & Webster, and an ad in the Newburyport Daily Herald described the inventory as “Flour, Groceries and Miscellaneous Articles.” In 1871 the store was sold to Paul A. Merrill. The store is on the 1872 and 1884 map and “The Reardon Family Collection” has a wonderful photograph that must be sometime around the 1890s.

Paul Merrill was born in 1840 and his obituary in 1911 describes him as being in the grocery business for 52 years.  Paul Merrill fought in the Civil War, the official documentation says that he received a gunshot wound in his right elbow in 1864.

After his return from the Civil War he opened his store in 1871 and married Lucy Ann Pike in 1873.  There are a series of 1877 advertisements lauding “Bixby’s Best,” a leather polish, “the great discovery of Dobbin’s Stark Polish,” for ironing linens and clothes and “Siddall’s Magnetic Soap” which claimed to make “Wash-day a Pleasure, both Winter and Summer,” along with flour, grain, salt and groceries. From all accounts he was both an involved member of the Newburyport civic community and a highly successful businessman as well. 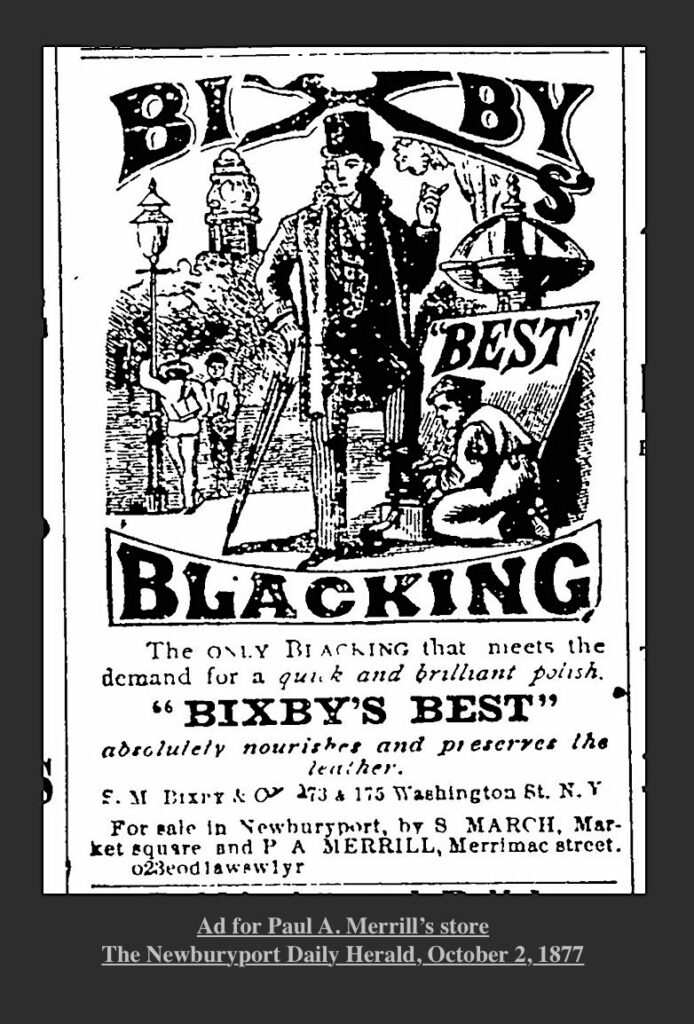 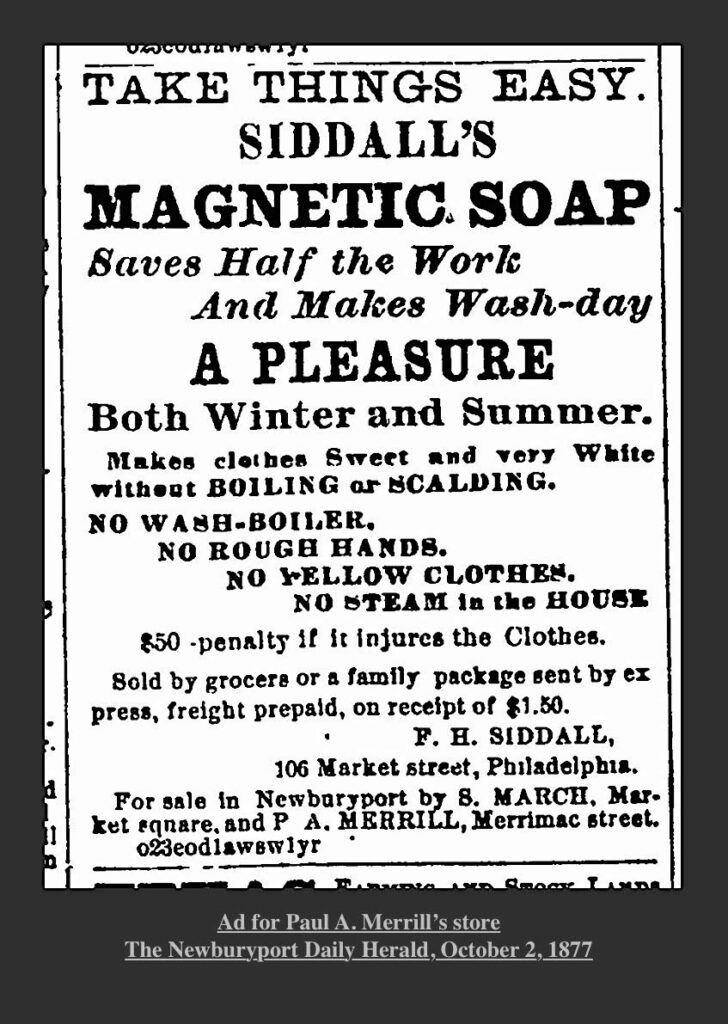 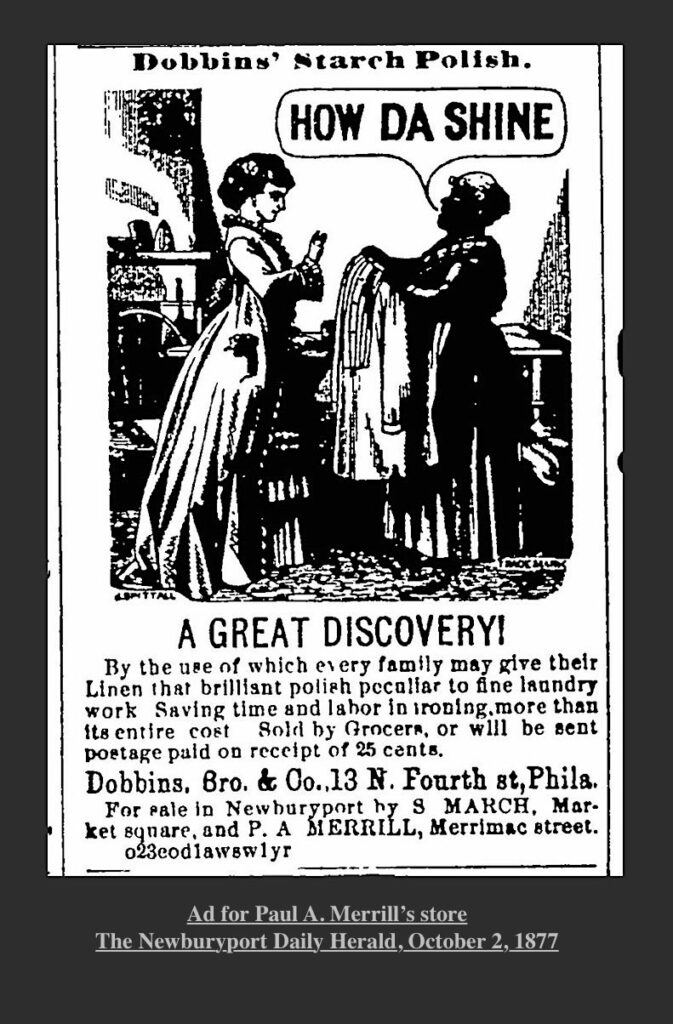 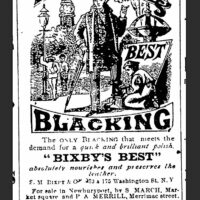 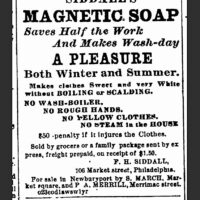 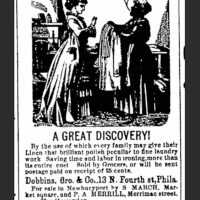 Merrill’s wife died in 1900 and his brother William was the only immediate member of his family to survive him.

Edward and Marilyn Reardon bought the store in May of 1965, it was known as Reardon’s Market. It has since become converted to condominiums.^^* 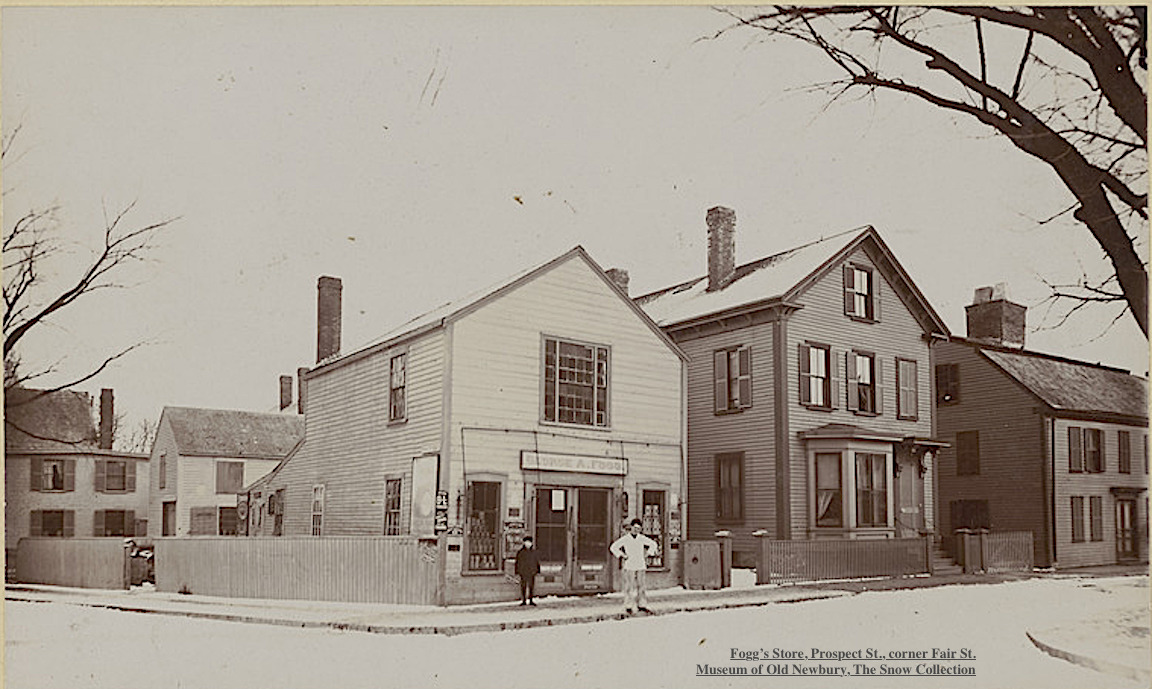 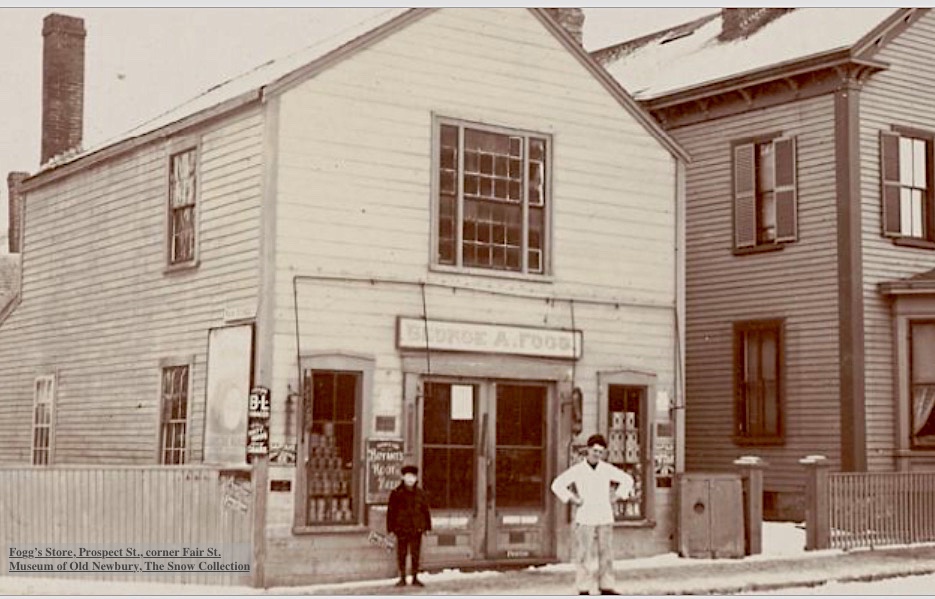 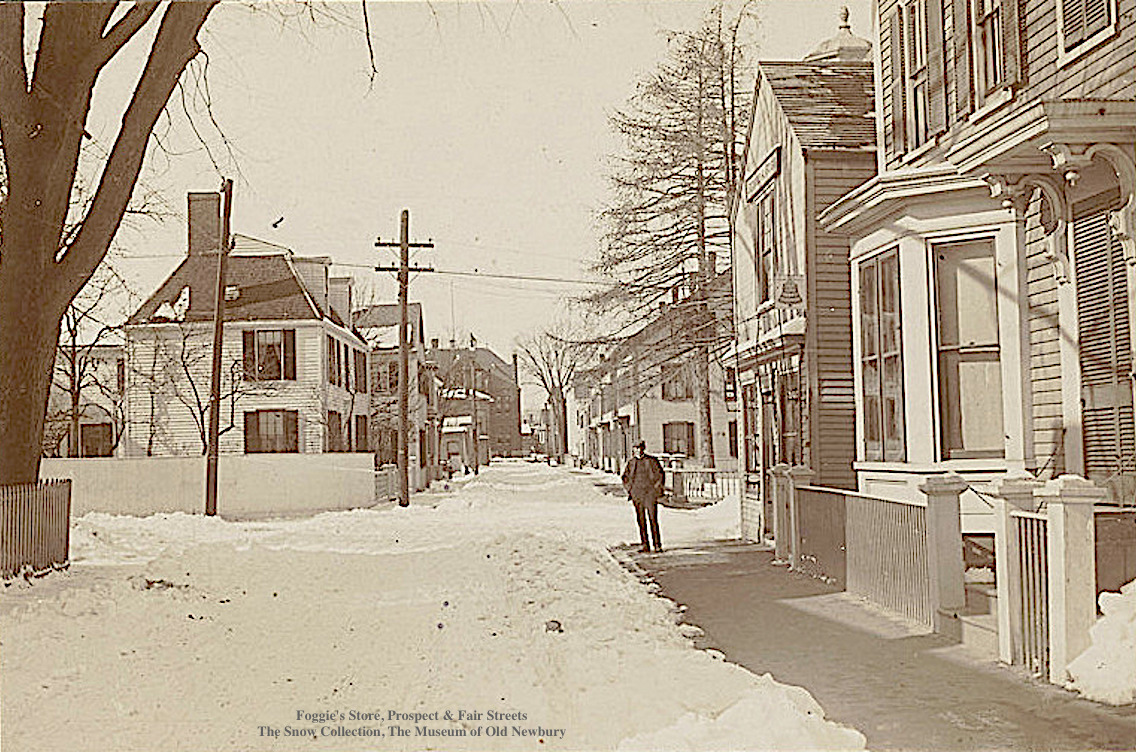 There is an obituary for George A. Fogg in the Newburyport Daily News, Dec 17, 1949. It says that Mr. Fogg was the oldest of the Newburyport grocers and was “never in any other business.” That he was a well-known and respected merchant who owned the business for 57 years. It goes on to say that Fogg’s first connection with the grocery trade came at the age of 17, and that he bought the grocery store on Prospect Street from John Stickney in 1890. “His business conduct was characterized by unpretending qualities and in an interview with this paper Mr. Fogg was quoted as saying, ‘Not by what men have are they to be judged but by what they give.’” 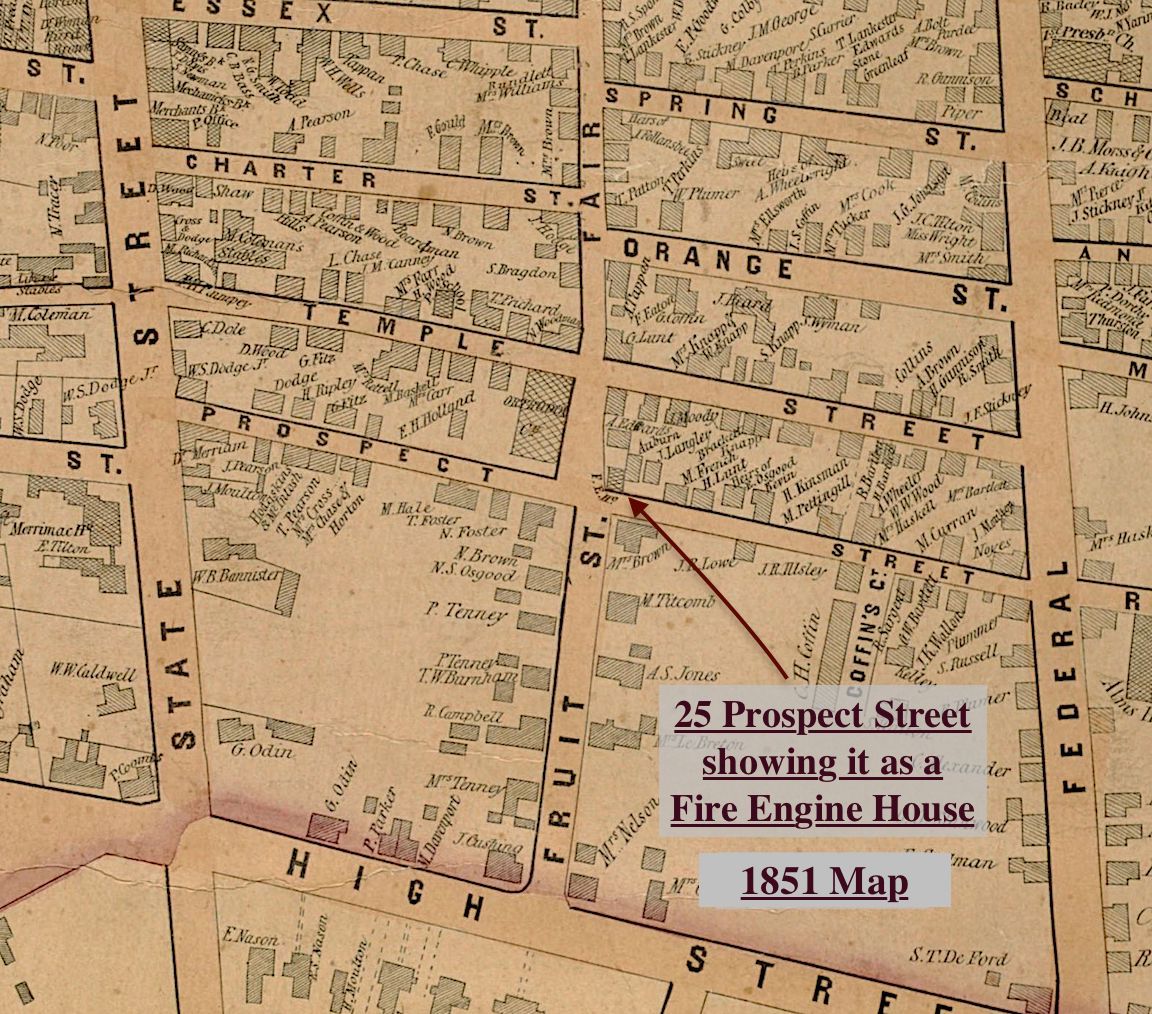 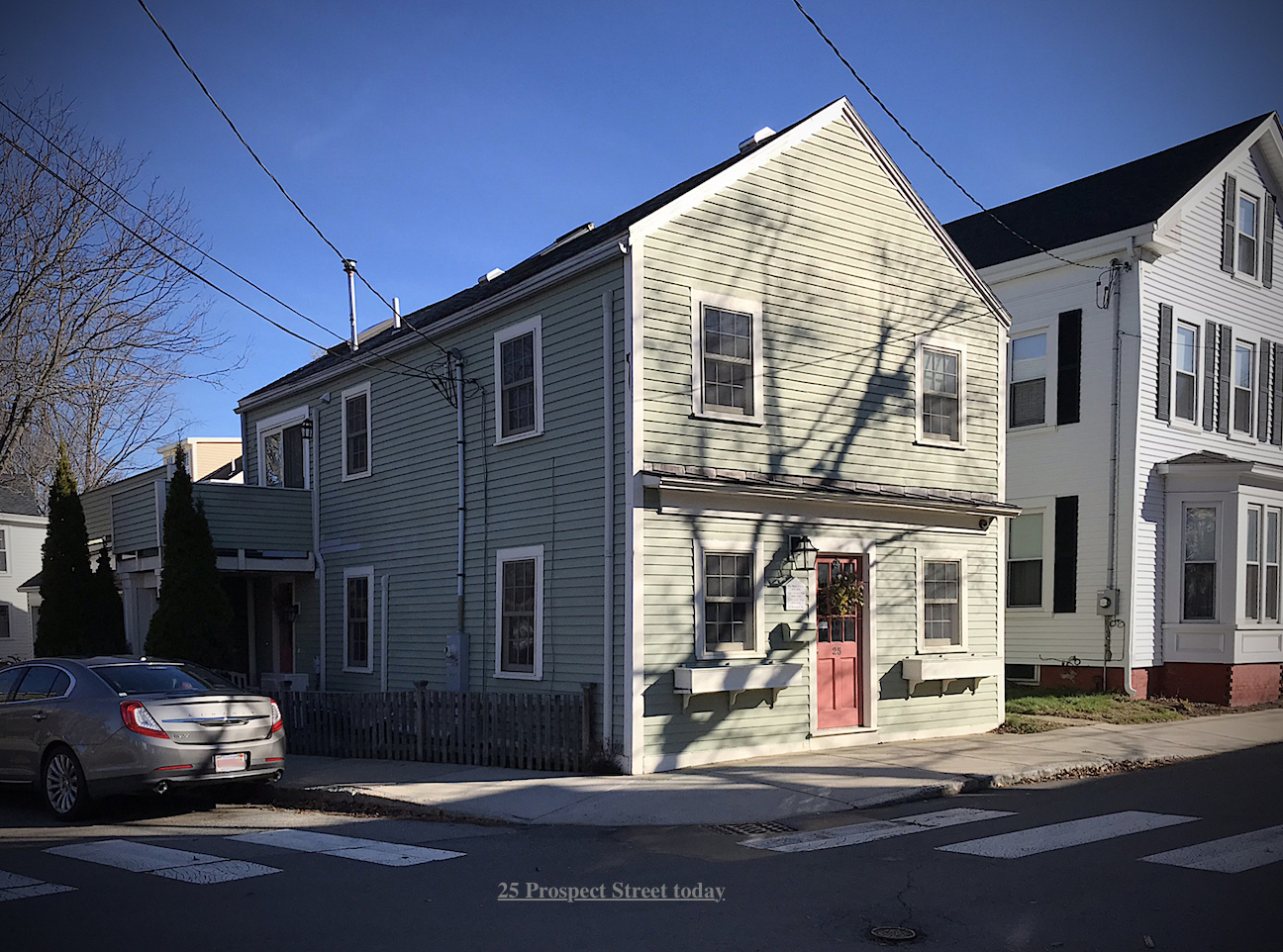 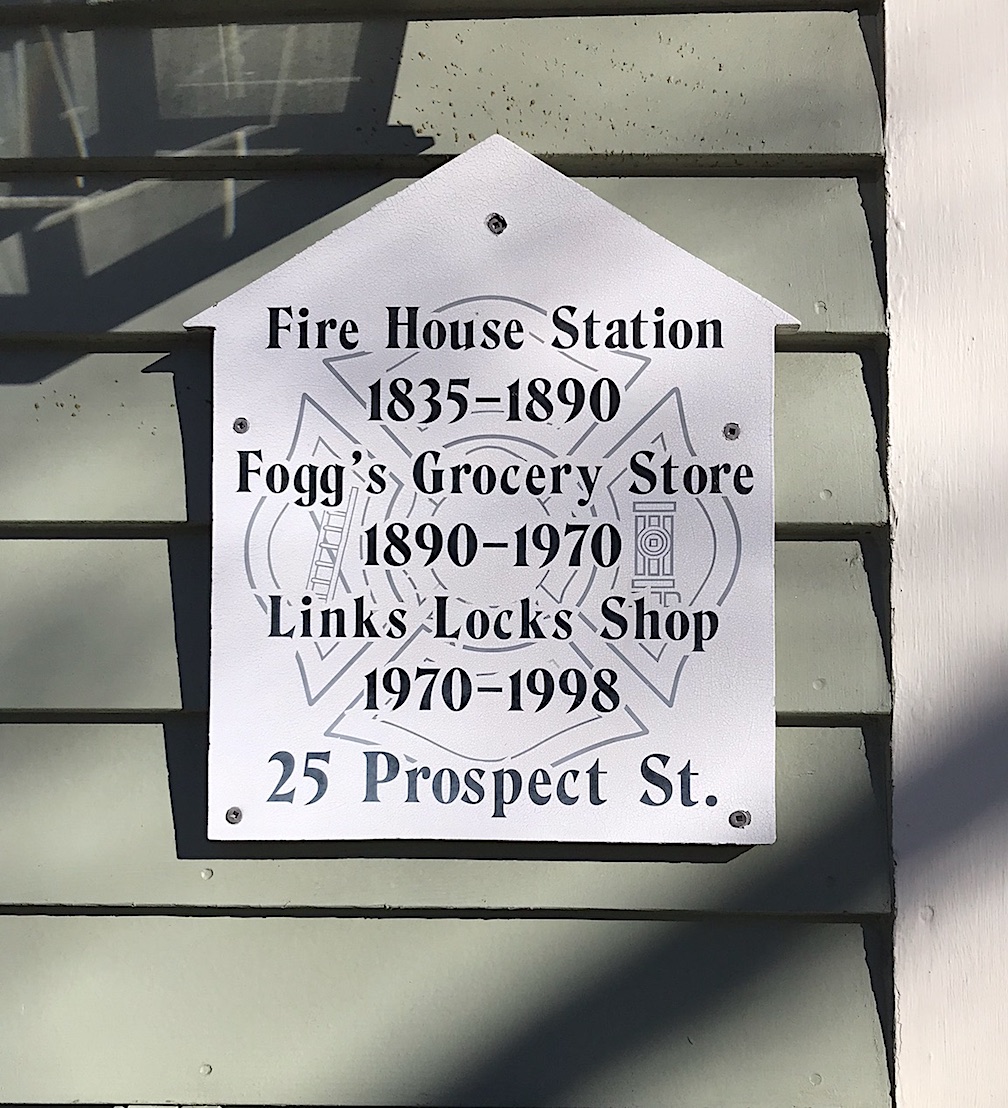 “The store was Foggs when I grew up. Bertha Fogg was an absolute angel. I remember her husband always had a cigarette in his hand. We would buy necessary groceries and they would run a tab for the week. We’d buy our penny candy there, standing on a step at the bottom of the glass candy counter. Great people, great memories.”

“Went to Fogg’s Grocery many times in 50’s and 60’s as we played baseball and whiffle bar on the field where the Sullivan Housing and bank parking lot is located.”

“Lived on that street in the early 60’s remember the corner store well. Bertha & her husband. Great days.”

*** History courtesy of the current owner for “If This House Could Talk,” August 2019

Everything you needed was right in the neighborhood, by John Gove, Newburyport Daily News, August 25, 2006 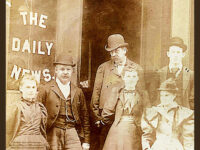