The houses by Frog Pond and the wealthy Newburyport merchants in the late 1700s. 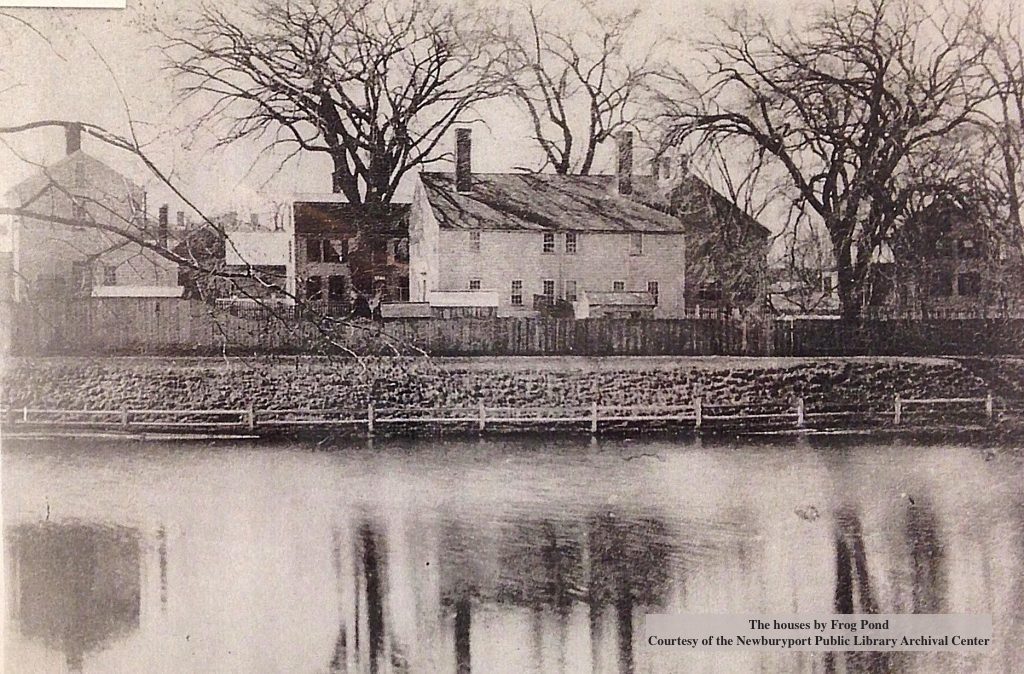 Many people in Newburyport have heard of Nathaniel Tracy and Tristram Dalton, but Stephen Hooper (1741-1802) is a new name. And I am pretty certain that Stephen Hooper is one of those people, although he was an important person at the time that he lived in Newburyport, has long been forgotten. And for someone who was that prominent, there is very little information on him.

Stephen Hooper was a, “Merchant and shipbuilder, son of Robert “King” Hooper of Marblehead, settled in Newburyport and became one of the town’s most prominent residents. Active in the West Indies trade, he was a partner in numerous privateering ventures during the Revolution. Although in 1786 he was the second richest man in Newburyport, by 1790 his net worth was only a fraction of what it once had been.”*

“Stephen, son of Robert Hooper, graduated at Harvard college in 1761, and came to Newbury soon after that date. He married Sarah Woodbridge October 10, 1764, owned and occupied a dwelling house on the southerly side of Frog Pond in Newburyport.” In 1882, the house once owned by Stephen Hooper was sold and removed.**

“A Newburyport merchant, outfitted privateers and sold supplies to the army during the Revolution. During and after the Revolution he was an occasional business partner of Tristram Dalton, senator from Massachusetts in the First Congress.”^*^

In 1856 the Newburyport Daily Herald, the archived newspapers from the Newburyport Public Library Archival Center, has this to say, “Its (the Free Mason Lodge, now located on Green Street) first Master was Stephen Hooper and its second Nathaniel Tracy two eminent and wealthy merchants who will always be remembered in our history.”^*

Tristram Dalton (as in The Dalton Club on State Street), married Ruth Hooper, who was the sister of Stephen Hooper. Brother and sister, Stephen and Ruth Hooper, were two of the children of the wealthiest merchant in Marblehead,  Robert “King” Hooper.

I’ve always wondered how Stephen Hooper made his fortune and became such a prominent citizen in Newburyport, and this piece of information helps answer that question – “Shipbuilding and merchant families were often intermarried, and capital flowed easily between these two interests. One of the Woodbridge daughters (Sarah Woodbridge) from the family which owned Ferry Wharf and rented the Middle Ship Yard, married a son of “King” Robert Hooper of Marblehead (Stephen Hooper). In this way, Ferry Wharf came under the control of one of the leading Colonial merchants dynasties.” This came from a remarkable history of Newburyport, “Port and Market, Archaeology of the Central Waterfront, Newburyport Massachusetts,” Prepared for the National Park Service, 1978 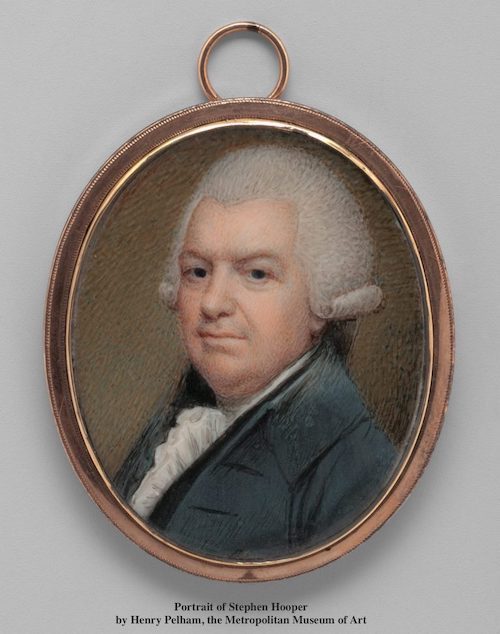 Portrait of Stephen Hooper, by Henry Pelham, the Metropolitan Museum of Art, a miniature, set in gold, painted in 1773, watercolor on ivory, 1 7/8 x 1 1/2 inches

The wealthy merchants in Newburyport in the late 1700s

There is little written about Stephen Hooper, but this gives an idea of the opulent life style of the very wealthy class in Newburyport in the late 1700s to which Stephen Hooper belonged:

“Tristram Dalton (Stephen Hooper’s brother-in-law), on his marriage with Miss Hooper, of Marblehead (Ruth), reached home (Newburyport) in this style: “His splendid new carriage was drawn by six white horses, decorated with white feathers; they hold four outriders, and footman and coachman dressed in new liveries.  So they rode down State Street, with the carriage-top thrown back.”^*^*

“His (Nathaniel Tracy) residence was the building on State Street now used for the Public Library, and, with his means and cultivated taste, it was one of the most attractive places in the Commonwealth. It abounded in all that heart could wish. His slaves — for that was the era of negro slavery in Massachusetts — served the guests at his tables, and they were not unfrequently the most distinguished men of this and foreign lands. His carriages, with liveried drivers, six in hand, and outriders, were such as have never been seen in the town since his day. He owned several country seats, summer retreats, hunting-grounds, and fine fish-ponds, with other conveniences and attachments such as would have become a British lord.”^*^* 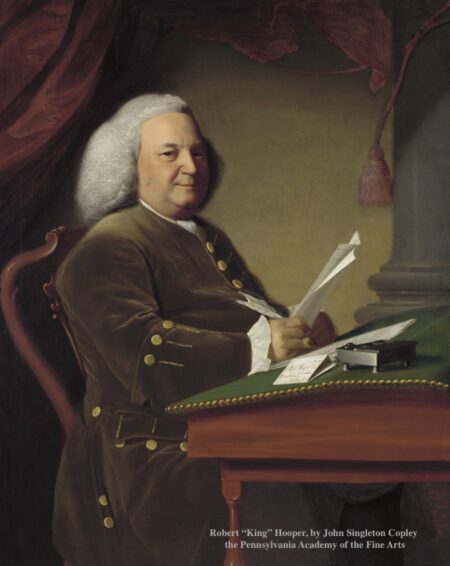 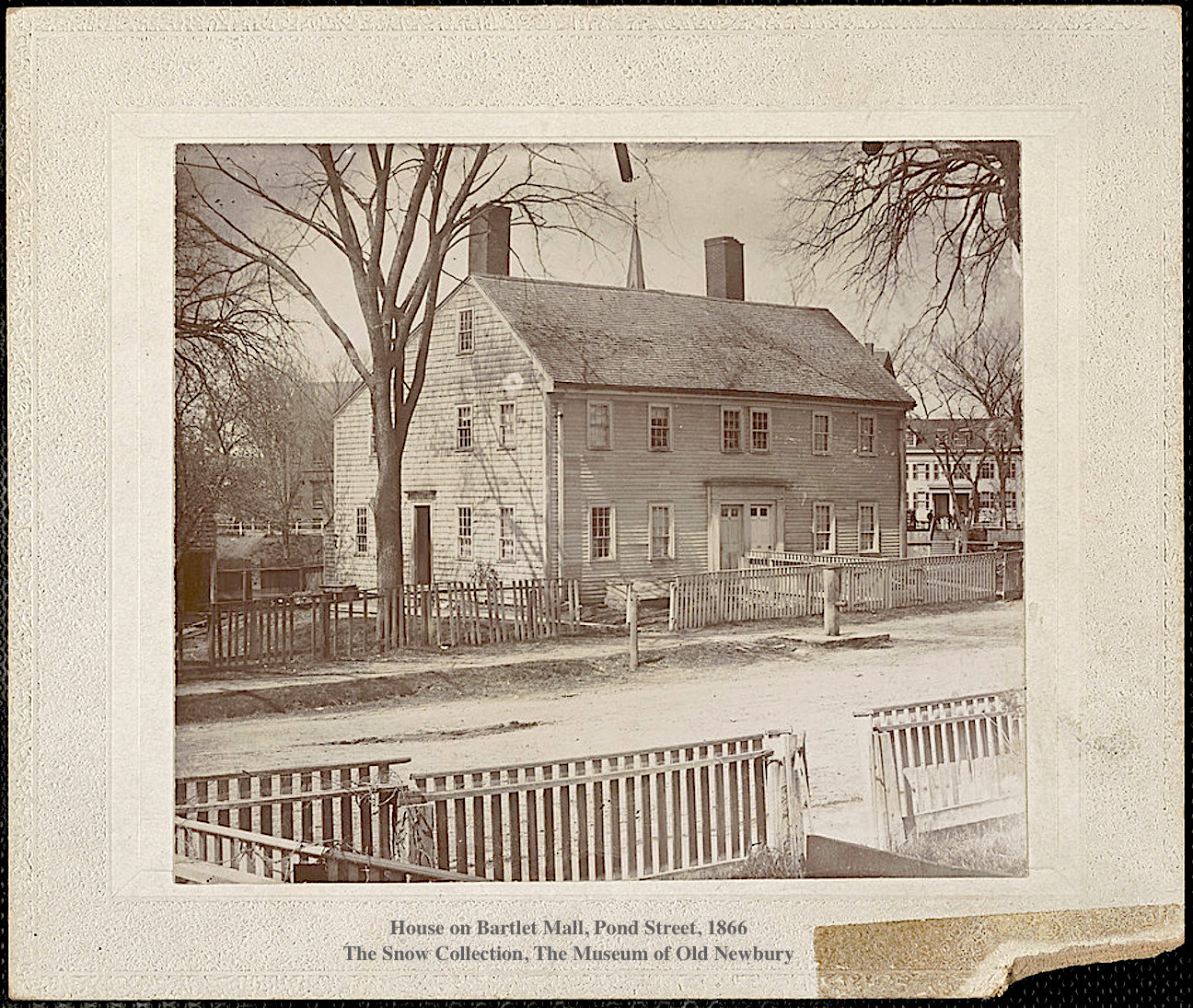 House on the Bartlet Mall, Pond Street, 1866, The Snow Collection, The Museum of Old Newbury 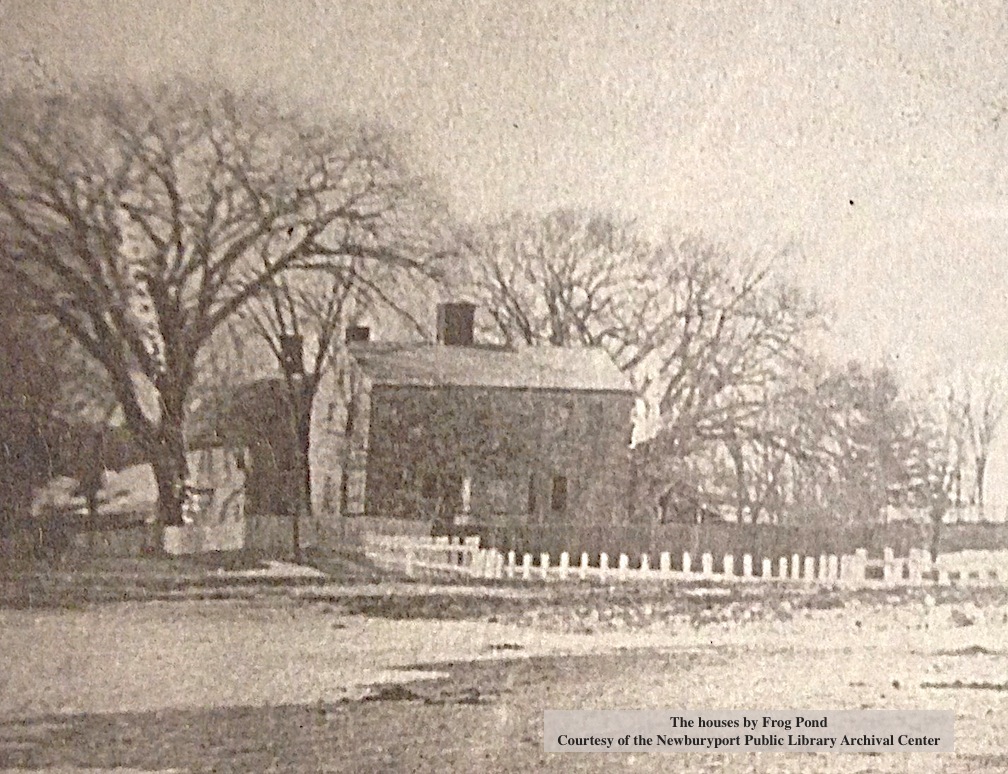 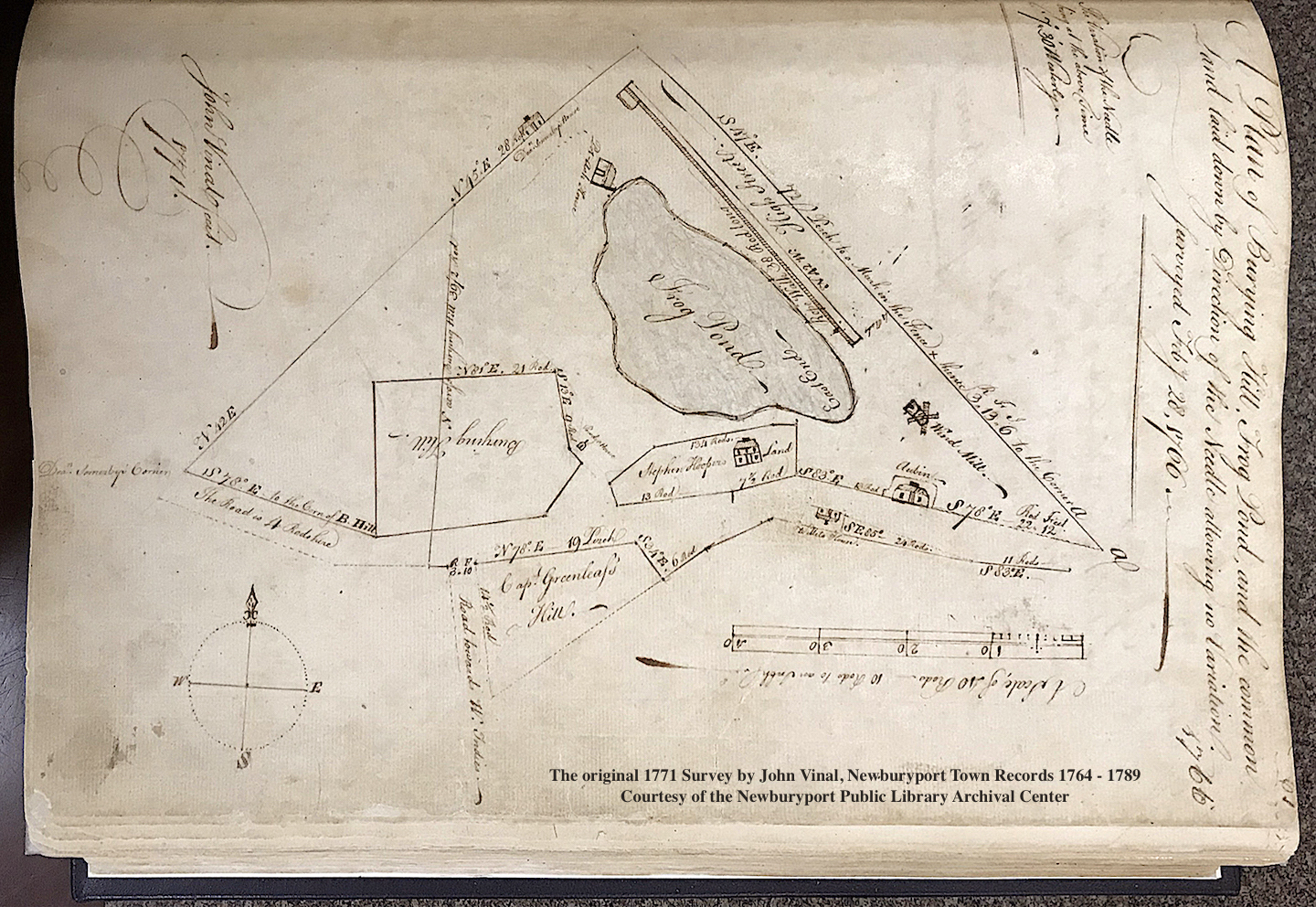 Original survey by John Vinal of “A Plan of Burying Hill, Frog Pond and the Common Land,” surveyed Feb 28, 1766, courtesy of the City of Newburyport, the Newburyport Public Library Archival Center 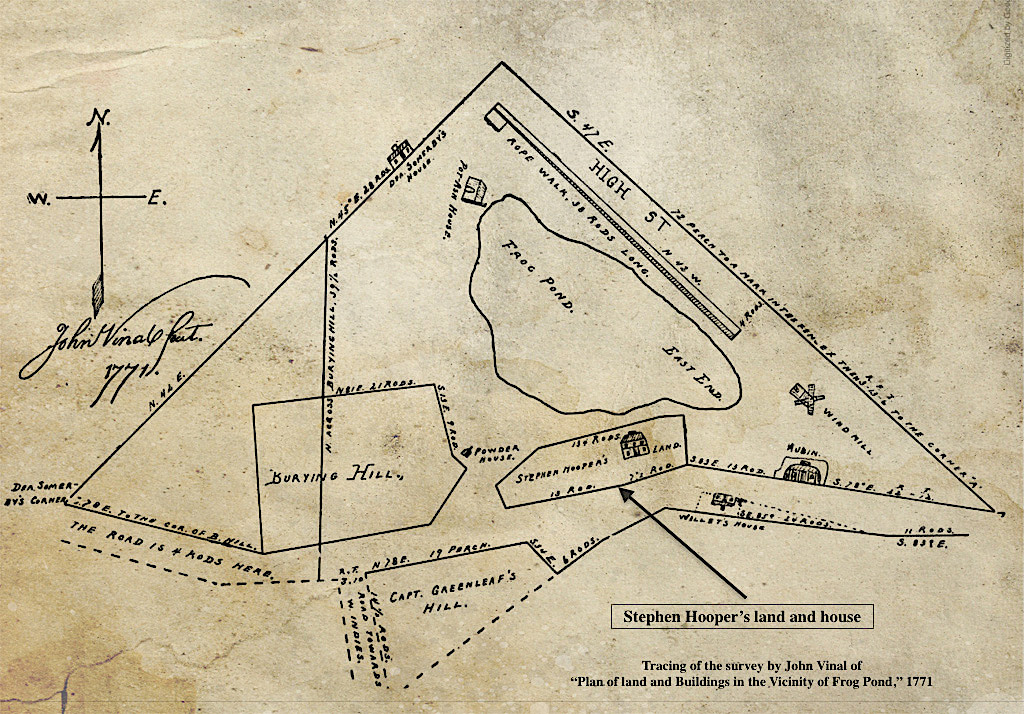 Tracing of the survey by John Vinal of “Plan of land and Buildings in the Vicinity of Frog Pond,” 1771^^* and “Old Newbury: Historical and Biographical Sketches,” by John J. Currier 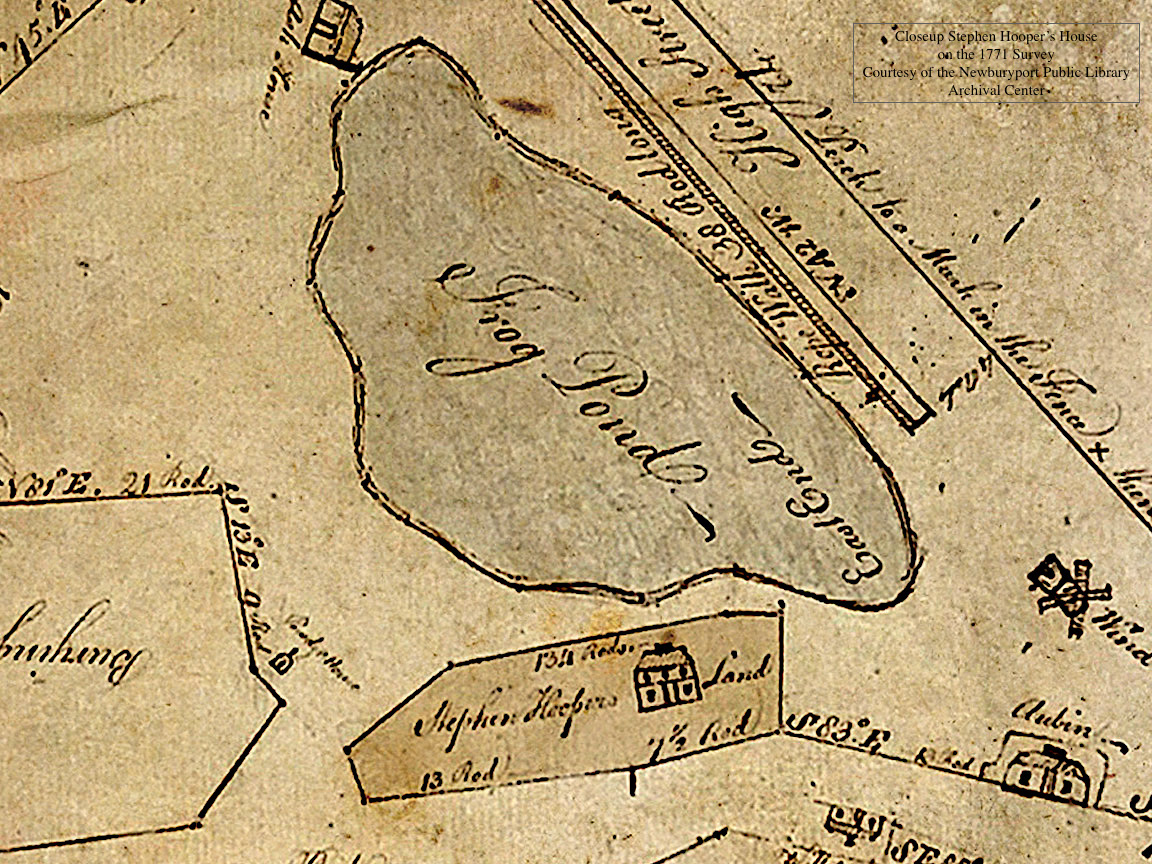 Closeup of Stephen Hooper’s House on the 1771 Survey, courtesy of the Newburyport Public Library Archival Center 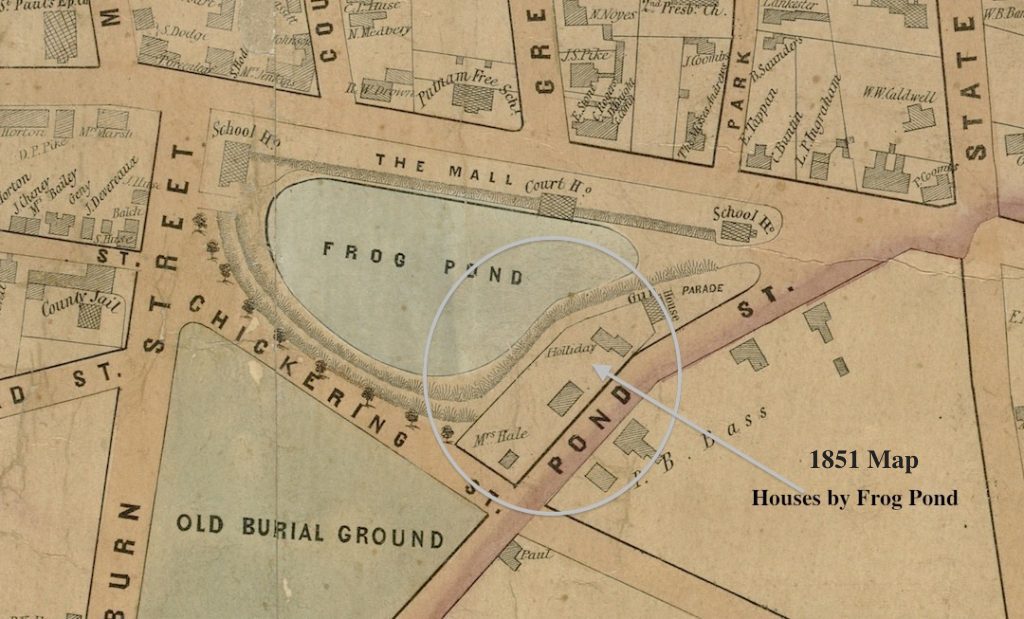 Stephen Hooper lived in a house by Frog Pond

There is a tracing of a 1771 map of Newburyport that shows the land and house that Stephen Hooper owned by Frog Pond. And I have a copy of the original map from the Newburyport Town Records 1764 – 1789 (that the tracing was taken from), from the Newburyport Public Library Archival Center (with a special “thank you” to Sharon Spieldenner the head archivist). The 1851 map also shows that there are houses across from what is now CVS on Frog Pond.

There is a portrait of Stephen Hooper done by Henry Pelham (the stepbrother of John Singleton Copley), a miniature, set in gold, painted in 1773, it’s a watercolor on ivory from the Metropolitan Museum of Art. A portrait of Stephen’s father, Robert “King” Hooper, by John Singleton Copley, painted in 1767, is at the Pennsylvania Academy of the Fine Arts.

Signature on a letter by Stephen Hooper, dated 1776 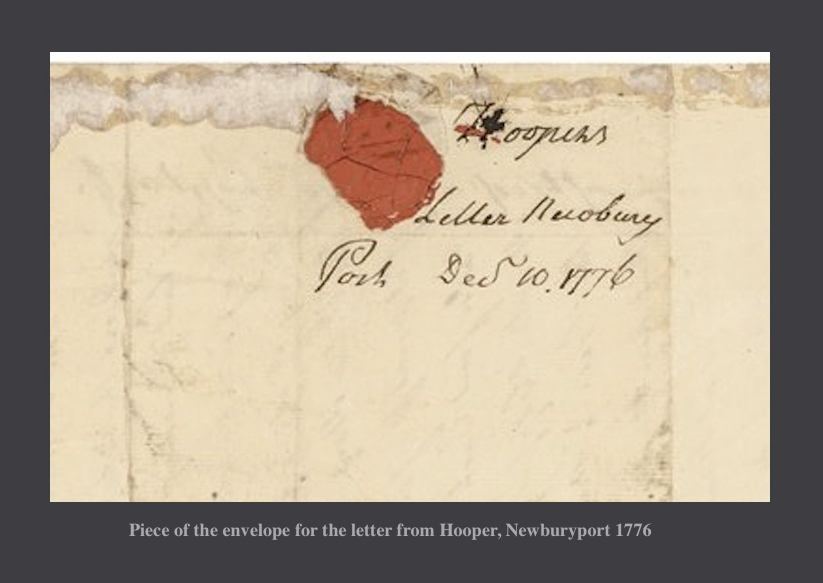 Piece of the envelope for the letter from Stephen Hooper, Newburyport 1776

* “The Documentary History of the Supreme Court of the United States, Volume 6,” Columbia University Press, By Maeva Marcus

*** The archived newspapers from the Newburyport Public Library Archival Center

^*^* “‪Standard History of Essex County, Massachusetts‬: ‪Embracing a History of the County from Its First Settlement to the Present Time, with a History and Description of Its Towns and Cities. The Most Historic County of America‬” by ‪Cyrus Mason Tracy‬, Henry Wheatland, ‪C. F. Jewett & Company‬, 1878‬‬‬‬

**^^ Years ago they moved them; today they demolish them, by Joe Callahan, Newburyport Daily News, June 18, 2012